Against the apocalyptic backdrop of the past few months, two recurring images stand out. One is of people lining up outside of grocery stores, each shopper wearing a mask to slow the spread of COVID-19. The other is of hundreds of people lying on streets and bridges, hands behind their backs, to protest police racism and violence after Minneapolis policeman Derek Chauvin killed George Floyd. 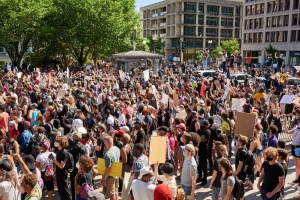 Protests in Washington, D.C., on May 30 following the killing of George Floyd. © Geoff Livingston / CC BY-NC-ND 2.0

These two images have much in common beyond visual similarities—the urban landscape, the repeating patterns, the obscured faces. Both feature large groups of people engaged in what psychologist Phil Zimbardo calls “acts of everyday heroism,” small-scale good deeds that might seem ordinary. Yet multiplied by the millions, the impact of such acts—in saved lives, and in changed minds—far surpasses what any single heroic act can deliver.

Amid two crises—a global pandemic and the scourge of racism and police brutality—collective heroism is having a moment it has not had since the height of the civil-rights era. It’s in finding ways to sustain that momentum that we can meet the scale of what’s ahead, something Martin Luther King emphasized throughout his life.

“We are caught in an inescapable network of mutuality, tied in a single garment of destiny,” he wrote in a letter from Birmingham Jail. “Whatever affects one directly, affects all indirectly.”

In America, and in the West in general, the concept of heroism is tethered to the ideal of the triumphant individual. Books and articles extol the feats of Malala Yousafzai, Sully Sullenberger, and Wesley Autrey, who put their lives and safety on the line for others. Towering figures like these also dominate our shared fictional lexicon: Achilles, Black Panther, Katniss Everdeen.

These real and fictional heroes, research shows, prompt us to reflect on our values and even to take selfless action ourselves. But our first-string hero lineup also reflects the uniquely American worship of individualism and self-sufficiency. Virtues like these come in handy when you’re stuck in a cult-like mindset or when you’re the only one who can save a life—and they can also be counterproductive in the face of global cataclysm.

Yet even in a nation steeped in Ralph Waldo Emerson’s self-reliance creed, collective heroism has long hummed beneath the surface. During World War II, millions of people grew victory gardens so the country’s food reserves could go to the troops. During the pandemic flu of 1918, large-scale mask-wearing campaigns likely saved thousands of lives. And during the civil-rights era, thousands of Black Americans refused to ride segregated city buses—a stand that ultimately helped drive passage of the Civil Rights Act of 1964.

Shared victories like these “arise from some pressing social need that requires a team effort,” says University of Richmond psychologist Scott Allison, author of Heroic Leadership. “This large collective can pass through the stages of the hero’s journey much like an individual does, starting with the passage into a dangerous, unfamiliar world, encounters with obstacles and enemies, transformation, and ultimately triumph.”

In the best-case scenario, collective heroism can even eliminate the need for individual heroic sacrifices. In countries where most people made small-scale behavior changes to keep COVID-19 at bay, heroic doctors did not have to navigate overflowing patient wards without enough protective equipment.

The signature quality of collective heroism is that it’s made up mostly of everyday, ordinary acts—donning a mask, joining a protest, walking to work instead of taking the bus.

By themselves, such acts are easy to dismiss as insignificant. Carried out in isolation, they likely would be insignificant. In order to succeed, a collective heroic effort must be constructed like an acrobat pyramid: Each actor must have confidence that others will join in to support the structure’s weight. University of Surrey studies show that to be inspired to collective action, we first have to have a baseline belief or hope that broad social change is possible. Without such hope, people express less desire to engage in social movements.

Americans of all backgrounds are now putting themselves at risk of arrest to support the cause of racial justice, demonstrating their baseline trust that multiplied acts can move the needle. That shows that these protestors “are willing to bear some of the risk,” says Zeno Franco, a psychologist and heroism expert at the Medical College of Wisconsin. “Not just sit at home and feel bad for a community, but recognize that the power does belong to us as individuals when we act in unison.”

There’s often a strong core of this kind of cooperative action beneath what our culture styles as individual heroism. Many figures we consider larger-than-life were more interested in fostering collective heroism than in becoming heroes themselves. Martin Luther King, Susan B. Anthony, and César Chávez are now immortalized as statues, but none could have accomplished what they did without the small, daily contributions of thousands of unnamed supporters.

“Almost all of the social movement heroes,” Franco says, “are just the visible face of a much, much larger and more complex form of group bravery.” Chávez’s main job, he points out, was to keep people focused on collective action so they could drive the national conversation about workers’ rights. As a leader, he was skilled at communicating with groups of people, persuading them to follow a course of action that would benefit everyone involved.

Allison agrees. “The line between individual heroism and collective heroism is blurred, because none of us ever does the hero’s journey alone.”

How to inspire collective heroism

In societies that prize self-determination, motivating people to collective heroic action may be a tougher slog than it is in cultures that elevate unity and interdependence.

In a Technical University of Berlin study, researchers recorded how often players were using cooperative game features, such as upgrading other players’ resources and checking in on the group’s progress. It turned out that players who used these features more expressed greater ongoing desire to support the common good. This may be the result of a virtuous cycle: Participating in collective action—whether it involves helping others, protesting, or pledging to wear a mask—makes you feel good about your contribution, and that rush motivates you to contribute more in the future.

Other ways to foster group-mindedness involve harnessing our conformist side to useful effect. University of Tennessee simulations show that sanctioning free riders prompts groups to adopt cooperative social norms—an insight that could drive acceptance of norms like universal mask-wearing or speaking up when others face abuse. When there are penalties for not chipping in, such as fines or social ostracism, collective-focused action starts to look a lot more enticing.

Preparing for collective heroism also requires widening the circle that defines who matters to you and whose joys and sorrows you share. Part of what’s kept institutional racism in place is a centuries-old failure of empathy: People refused, or were ill-equipped, to grasp the full extent of racial discrimination.

Since George Floyd’s murder, millions of people have shared in the grief of the Black community, accepting it as a grief to be felt by all. That kind of grief, Franco notes, “builds up to a form of collective hopelessness, and eventually to a feeling that the only way out is to fight.” That motivates a broad cross section of people to join forces and fuels the desire for many more collective stands.

“The moral imperative here is not an individual imperative,” Franco says. “We have forgotten over the last 30 years how much collective power we have. If we take risks as a collective, a different outcome is possible. And that is ultimately what heroes do—they help us to imagine a more just future.”