Have you ever wondered what’s behind people’s smiles? Lip Service, by psychology professor Marianne LaFrance of Yale University, is full of fascinating research about the development of smiles from infancy to adulthood, offering a comprehensive and entertaining account of the important role smiles play in human interactions.

Infants begin to practice smiling in the womb a month or two before they are born, because they need smiles to communicate with and win over their caregivers for survival. Babies’ smiles may not reflect true emotion; but, like all smiles, they have currency in human relationships, even though smiling and how people respond to it often occurs below conscious awareness. 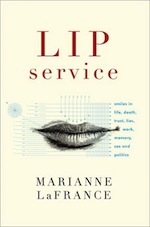 LaFrance’s informs us that women smile more than men; but men with higher testosterone levels smile less than men with lower levels, except in situations where sexual connection is a potential goal. Service workers receive higher tips if they smile, and couples are more likely to stay together if they smile often.

There are many different styles of smiles—from flirtatious to shy to politically-motivated—and LaFrance explains how they are produced and interpreted, depending on the viewers’ preconceived notions. For example, when house majority leader Tom Delay was arrested in 2005 on conspiracy and money-laundering charges, Republicans were “delighted to see their leader smiling” in his police mug shot, while Democrats saw “only reptilian gloating.”

But there is no doubt that the smile of true merriment—called the “Duchenne” smile, after the researcher who described it—produces the most positive effect in others. The Duchenne—which involves activation of the zygomaticus major muscle that pulls the corners of the mouth up and the obicularis occuli muscle that circles the eyes—lights up the reward centers in the brains of people who see one. In addition, people who view faces with Duchenne smiles will rate those faces as more intelligent, friendly, attractive, sincere, and kind than faces with non-Duchenne smiles or neutral expressions.

Though we may be tempted to exclusively use Duchennes, LaFrance explains that they are hard to fake. In addition, it’s important to have a full repertoire of smiles. Sometimes it’s necessary to fake a smile, she writes, in order to diffuse tension or to spare someone’s feelings. And sometimes “genuine” smiles—those which appear to be spontaneous—may not communicate true emotion, such as when one has learned to smile automatically when angry.

Still, “There are few compliments more flattering than being told that one has a great smile,” writes LaFrance.  After reading this book and seeing the central importance of a smile in human communication, one can understand why.