When I started to study embarrassment in the early 1990s, most researchers thought signs of mortification exposed confusion and thwarted intention. But I wasn’t so sure. I was struck by how the smiles of people such as Gandhi and the Dalai Lama showed elements of embarrassment—gaze aversion, lip presses, and smile controls. They were not confused; they hadn’t been thwarted. Why the embarrassment?

At the same time, embarrassment is often absent among people at the other end of the moral spectrum: those prone to violence. In one experiment, I observed 10-year-old boys attempting to answer questions designed to be too difficult for kids their age (e.g., “What is a barometer?” “Who was Charles Darwin?”). Well-adjusted boys, I found, showed embarrassment when they missed the questions, displaying concern over their performance—and, perhaps, a deeper respect for the institution of education. Aggressive boys, in contrast, showed little or no embarrassment, and instead erupted with occasional facial displays of anger. One boy even gave the finger to the camera when the experimenter had to leave the testing room momentarily. 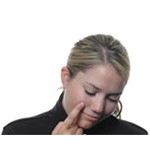 This offers us insight into the true nature of embarrassment: I have discovered that this subtle display—the averted gaze, the pressed lips—is a sign of our respect for others, our appreciation of their view of things, and our commitment to the moral and social order. Far from reflecting confusion, it turns out that embarrassment can be a peacemaking force that brings people together—both during conflict and after breeches of the social contract, when there’s otherwise great potential for violence and disorder. I’ve even found evidence that facial displays of embarrassment have deep evolutionary roots, and that this seemingly inconsequential emotion provides us with a window into the ethical brain.

The first step in my investigation of embarrassment was to embarrass people, a task that gives license to a more mischievous side of researchers’ imaginations. To induce embarrassment in the sterile confines of the typical psychology laboratory, researchers have had college students model bathing suits or suck on pacifiers in front of grinning friends. In perhaps the most mortifying experiment, participants had to sing Barry Manilow’s song “Feelings” using dramatic hand gestures—and then had to watch a video of their performance surrounded by other students.

In my own study of the facial movements produced by the feeling of embarrassment, I filmed people as they followed muscle-by-muscle instructions to achieve a difficult facial expression. The instructions were as follows (try it if no one is looking):

4. Puff out your cheeks

The experimenter quickly noted, with drill sergeant precision, participants’ deviations from the instructions (“keep your eyebrows raised; now close your mouth, and don’t press your lips together, pucker them; remember to puff out your cheeks, and don’t stick out your tongue”). Typically, after a 30-second struggle, participants valiantly achieved the expression. After 10 seconds of this pose, participants were asked to rest. It was in the milliseconds after resting that I saw my quarry: the embarrassment display—a fleeting but highly coordinated two- to three-second signal.

First, the participant’s eyes shot down within three quarters of a second after achieving the awkward pose. Then the individual turned his or her head to the side, typically leftward, and down within the next half a second, exposing the neck. Contained within this head motion—down and to the left—was a smile, which typically lasted about two seconds. At the onset and offset of this smile, like bookends, were other facial actions in the mouth, smile controls: lip sucks, lip presses, lip puckers. And while the person’s head was down and to the left, a few curious actions: The person looked up two to three times with furtive glances, often touching his or her face. This three-second snippet of behavior was not some bedlam of confused actions, as researchers had previously thought; it had the timing, patterning, and contour of an evolved signal, coordinated, brief, and smooth in its onset and offset.

To understand the deeper meaning of facial displays, we need to turn to the displays of other mammals. Cross-species comparisons tell us about the evolutionary continuity of our emotional displays from those of other species. We learn about the contexts in which displays emerged: sharing food, fighting a rival, engaging in rough-and-tumble play, or ridding our insides of toxic elements. We learn how displays are really the tip of the iceberg of more complex behavioral systems, such as eating, breast feeding, attack, or defense.

What evolutionary forces have given rise to the gaze aversion, head turns and facial touches, and that coy smile of embarrassment? I would find answers from studies of appeasement and reconciliation among nonhuman primates. Emory University primatologist Frans de Waal has devoted thousands of hours to the study of what different primates—macaques, chimpanzees, and bonobos—do following aggressive encounters. Prior to this work, few scientists questioned the “dispersal hypothesis,” which held that after an aggressive encounter, two combatants would move away from each other as far as possible—a safe, self-preserving, and adaptive thing to do.

This view might make sense for solitary species, like the golden hamster, which flees upon being attacked, or territorial species, like many birds, that rely upon territorial arrangements to avoid deadly conflicts. But many mammals, and in particular primates, need each other to survive. Ostracism and marginalization are tickets to shortened lives. Among humans, individuals who have fewer and less healthy social bonds have been shown to live shorter lives, have compromised immune function, and be more vulnerable to disease. Our sociality, and that of many nonhuman primates, requires a mechanism that brings individuals together in the midst of conflict and aggression.

De Waal discovered such a mechanism in his studies of reconciliation. In the midst of conflict or aggression, the subordinate or defeated animal first approaches and engages in submissive behaviors, like bare teeth displays, head bowing and bobbing, and submissive grunts. These actions quickly prompt friendly grooming, physical contact, and mutual embraces, reconciling the warring parties. In nonhuman primates, these reconciliation processes transform life-threatening conflicts into affectionate, back-slapping embraces within seconds.

When I reviewed 40 studies of appeasement and reconciliation processes across species, from blue-footed boobies to 5,000-pound elephant seals, the evolutionary origins of embarrassment became apparent: It is a display that reconciles, that brings animals together in situations that might foment isolation or aggression.

Let’s take it behavior by behavior. Gaze aversion is a cut-off behavior. Extended eye contact signals others that they can continue what they’re doing; gaze aversion acts like a red light, terminating what has been happening. Our embarrassed participants, by quickly averting their gaze, were exiting the previous situation, for obvious reasons: Embarrassment follows actions that sully our reputations and jeopardize our social standing, including social gaffes, identity confusions (forgetting someone’s name), privacy violations (walking in on someone in a bathroom stall), and the loss of body control (the prosaic, but always mortifying, fart or stumble).

What about those head turns and head movements down? Various species, including pigs, rabbits, pigeons, doves, the Japanese quail, loons, and salamanders resort to head movements down, head turns, head bobs, and constricted postures to appease. These actions shrink the size of the organism and expose areas of vulnerability (the neck and jugular vein, in the case of human embarrassment). These actions signal weakness. Darwin himself arrived at a similar analysis of the shoulder shrug, which typically accompanies the recognition of ignorance (or intellectual weakness), and appears as the opposite of the expansive posture of dominance. At the heart of the embarrassment display, as in other species’ appeasement behaviors, is weakness, humility, and modesty.

The embarrassed smile has a simple story with a subtle twist. The smile originates in the fear grimace or bared-teeth grin of nonhuman primates. Go to a zoo and watch the chimps or macaques, and you’ll see subordinate individuals grin like fools as they approach dominant peers. Yet the embarrassed smile is more than just a smile; it has accompanying arabesques, muscle actions in the mouth that alter the appearance of the smile. The most frequent one is the lip press, a sign of inhibition. When people encounter strangers in the street, they often acknowledge each other with this modest smile. Just as common are lip puckers, a faint kiss gracing the embarrassed smile as it unfolds during its two-to-three second attempt to make peace.

The face touch may be the most mysterious element of embarrassment. Several primates cover their faces when appeasing, and even the friendly rabbit rubs its nose with its paws when appeasing. Face touching in humans has many functions. Some acts of face touching act as self-soothing (the repetitive stroking of hair in the back of the head), other acts are iconic (the rub of the inner eye, the flirtatious hair flick, which expands the coif to peacock like proportions). Certain face touches seem to act like the curtains on a stage, closing up one act of the social drama, ushering in the next.

Scrutinizing other species’ appeasement displays revealed the social forces that have shaped these displays over the 120 million years of primate evolution. This simple display brought together signals of inhibition, weakness, modesty, sexual allure, and defense—all woven together in a two- or three-second display whose mission was to make peace, to prevent conflict and costly aggression, and to bring people closer together, to re-establish cooperative bonds. We may feel alienated, flawed, alone, and exposed when embarrassed, but our display of this complex emotion is a wellspring of forgiveness and reconciliation.

The simple elements of the embarrassment display I have documented and traced back to other species’ appeasement and reconciliation processes—the gaze aversion, downward head movements, awkward smiles, and face touches—are a language of cooperation, they are the unspoken ethic of modesty. With these fleeting displays of deference, we navigate conflict-laden situations—watch how regularly people display embarrassment when in close physical spaces, when negotiating the turn-taking of everyday conversations, or when sharing food. We express gratitude and appreciation. And, with deflections of attention or face-saving parodies of the mishap, we quickly extricate embarrassed souls from their momentary predicaments. Embarrassment is like an ocean wave: It throws you and those near you down to Earth, but you come up embracing, and laughing.

Good an much informative post. Its different for the other remaining posts.