As many of us know, laughter is contagious. It can ripple through a movie theater, a classroom, and even business meetings.

But infectious laughter isn’t just good for a quick giggle. New research suggests that it provides important social benefits—benefits that might have served our ancestors well through millions of years of evolution. 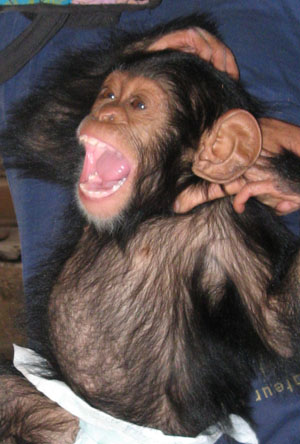 In a recent study, published in the journal Emotion, researchers investigated whether chimpanzees, some of our closest relatives in the animal kingdom, are prone to the same type of contagious laughter as humans, where we reflexively imitate someone else’s laugh even if we’re not feeling the same emotion that they are.

Prior research suggests that this type of laughter—say, a polite guffaw in response to a joyous bellow—could promote cooperation and positive communication, making laughter and smiles essential to emotional intelligence. This kind of laughter had been observed in humans but never before in our primate relatives.

As the researchers watched pairs of chimpanzees playing together, they consistently found that one chimp would laugh in response to another’s laughter. But this second laugh was distinct from the original laugh; it was shorter and had a different vocal quality.

This kind of contagious, responsive laughter showed “a striking similarity to [the] conversational laughter of humans,” write the authors, who are all based in the department of psychology at the University of Portsmouth in the United Kingdom. “Both vocalizations are significantly short and seem to promote social interactions.” Indeed, the chimpanzees would play together for a longer period of time when one of them laughed in response to the other’s laugh, suggesting that their shared laugh reinforced their social bond.

Chimpanzees in the new colonies were more likely to imitate laughter than were chimps in the older colonies. “It therefore seems likely that laugh replications have a more important role in the social communication of chimpanzees when their social partners are less predictable and/or when the need for social cohesion increases,” the authors write. 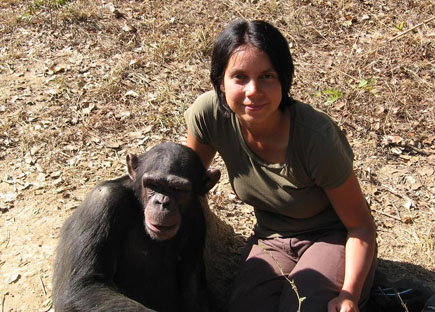 The study is the first to document this kind of polite, contagious laughter among non-humans. The results indicate that this type of laughter could have deep evolutionary significance, according to Marina Davila-Ross, the study’s lead author.

“These findings suggest that laughter first emerged into an expression of positive social communication that provided our ape ancestors important advantages,” says Davila-Ross, “before it evolved to become an ubiquitous tool of human communication with not only positive functions, but also negative ones (e.g., to mock).”

My first reaction to this fascinating item is to find it both extraordinary and amazing – but perhaps I shouldn’t.

To what degree, if any, has contagious laughter been observed between species? And considering that mirror neuron systems were discovered when primates were mirroring human actions, is laughter or any other display of fun or mirth mirrored across species by these same systems?

Great questions, Paul. I’m not aware of any research documenting contagious laughter between species, but I do know that researchers have found that dogs will imitate human yawns, suggesting at least a rudimentary form of empathy across species.

Here’s more on that study: http://greatergood.berkeley.edu/article/item/empathys_dogs/

Thanks for the link Jason - really interesting. I suppose I shouldn’t be too surprised at empathy between dogs and humans - we must have shared at least a million years of evolving in proximity and parallel, our paths literally intertwining as we both wandered across the plains of Africa; it’s easy to imagine mutual benefits and the emergence of a symbiosis.
Lillian - interesting point about parrots. I believe there are suggestions that birds learn their very distinctive songs - and even dialects - through some kind of mirror neuron system. Which makes the origin of such systems even more intriguing. I suspect that the emergence of similar systems in birds and mammals reflects independent origins, but who knows? Difficult to imagine complex social interactions in reptiles, but perhaps not for dinosaurs?
Any thoughts, or any links to related work?

Lillian - I tried to open the link in the comment above, but it says “Page Not Found”

Could you please reshare the link or is the page really down?

Thanks Lillian for the tip about internal search, found some amazing videos

This is a fantastic website and I can not recommend you guys enough. Full of useful resource and great layout very easy on the eyes. Please do keep up this great work.  cheap hotels in miami

Laugh­ter is con­ta­gious: you can catch it with­out ask­ing for it, or even nec­es­sar­i­ly want­ing it. Now, sci­en­tists say they have an idea of why.

I agree to all living things need a laugh. With a smile or laugh the burden of stress that there can be reduced and this is good for the body and the healing process when illness.

When Ive heard about this issue, I suddenly found a
book/paperback that showcase this topic very clearly.
I may recommend you to buy it too. Just PM me then.
Thanks in advance

To get started on being profitable along with your blog, initially use Ebay auctions but gradually as the traffic increases, keep adding progressively more profitable programs for a site. relatiegeschenken

This valuable editorial was very useful to read, I savored it completely. I’m about now to email it to my colleagues to permit them examine this too. Thank you really.Motorverzekering vergelijken

It seems a very good blog and especially this article fabulous.

I am really looking forward to skiing there. It is so very pretty and amazing there. Hopefully I can visit there one day.

It’s funny just how contagious laughter really is. Laugh to an infant and see their reaction - most likely, more laughter! I get my daughter to laugh hysterically by starting it out and letting her carry it on.