It may be the highest form of flattery, but imitation is among the lowest forms of empathy. Still, that doesn’t make it meaningless.

A recent study has shown that orangutans imitate each other’s facial expressions, providing evidence that empathy may exist in non-humans. 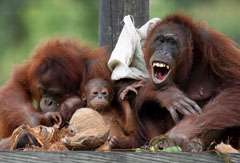 The study, published in the journal Biology Letters and led by researchers from the University of Portsmouth (in the United Kingdom) and the University of Hanover (in Germany), examined 25 orangutans in captivity. Researchers honed in on one of the orangutans’ facial expressions: oval-shaped open-mouths, which are analogous to human laughter. Just like among humans, the researchers found, the orangutans’ laughter was contagious: When one of them flashed his open-mouthed grin, others around him followed suit roughly two-thirds of the time.

Formally, this is called “emotional contagion”—evidence that emotions can be involuntarily passed from one person to another, like a cold. It’s a basic but still important form of empathy, indicating that an animal is capable of experiencing another’s emotion as his own. In humans, this involuntary facial mimicry can happen in less than fourth-tenths of a second. In this study, the researchers found that orangutans react just as quickly.

The presence of emotional contagion in orangutans suggests empathy is deeply rooted in human nature, stretching back as far as 12 to 16 million years ago, when humans and orangutans shared a common evolutionary ancestor.