Our country is increasingly polarized along political lines, with political differences now shaping everything from where we live to whom we want our children to marry. 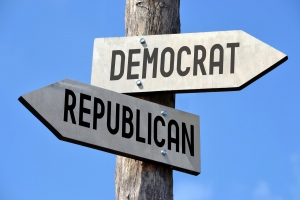 But what if we actually disagree less than we think we do? What if the real problem is that we don’t know how much we agree?   That’s the perhaps counterintuitive conclusion of a recent report from the bridge-building group More in Common. The organization conducted broad surveys of Democrats and Republicans, asking them to describe both their own viewpoints and the viewpoints they imagine that their opponents on the other side of the aisle have.

“We wanted to find questions that related to things that mattered to each side,” says Tim Dixon, a cofounder of More in Common.

Democrats were, for instance, asked to estimate what percentage of Republicans agree with the statement that “many Muslims are good Americans.” Meanwhile, Republicans were asked how many Democrats disagreed with this statement: “Most police are bad people.”

Both sides tended to drastically overestimate how much partisans on the other side of the aisle disagreed with them on these basic value statements. The nature of these disagreements suggests that partisans on both sides believe that their political opponents are far more extreme than they actually are.

In fact, 70 percent of Republicans agreed that “many Muslims are good Americans,” but Democrats estimated that just 41 percent of GOP backers would hold this view. The report labels this 29-point difference a “perception gap.”

The question about police produced an even wider perception gap. Eighty-five percent of Democrats disagreed with the statement that most police are bad people . . . but Republicans estimated that almost half of Democrats would agree. That’s a perception gap of 37 points.

In addition to highlighting these gaps, the report also looked at what may be exacerbating them.

For Democrats, it appears to be higher education.

The report found that “Democrats who hold a postgraduate degree are three times as inaccurate as those who did not graduate high school.” (There wasn’t any significant variation across education levels for Republicans.)

This doesn’t necessarily mean that higher education itself is distorting Democrats’ image of the other side. Rather, it appears that going to graduate school makes your social circle less politically diverse. “Education correlates strongly with a . . . narrower circle of friends in terms of their political diversity,” Dixon explains.

So, how can we close the perception gap?   Dixon advises Republicans to get out of their right-wing media bubble, if they want to understand what Democrats really believe. Both Republicans and Democrats need to vary their “media diet so that it includes conservative and liberal sources.” For their part, educated Democrats especially need to cultivate a more diverse social network. “If you have Republican friends from high school or family members if you’re a Democrat, or vice versa, those are people to stay in touch with. Those relationships will help [prevent] you from caricaturing your political opponents.”

These are individual solutions, but the report concludes by highlighting the need for even bigger institutional and cultural changes—ones that will help reduce perception gaps and the antagonism they breed:

Our media should be contributing to our understanding of each other, rather than reinforcing false impressions. New technologies should be connecting us, rather than feeding us information through opaque algorithms that only deepen our isolation. America’s education system should help forge a citizenry with a deeper knowledge and understanding of each other’s values and beliefs. . . .

But perhaps the greatest change required is in American culture. Our public life has been overtaken by a culture that emphasizes loyalty to one’s side and hostility to one’s enemies. The mere prospect of listening to the other side—or questioning one’s own—is perceived as weakness, and giving ground to the enemy. But addressing the Perception Gap requires that people on both sides see value in building bridges and engaging personally with those with a different political identity or views. . . .

It also requires that we reimagine a bigger ‘story of us’—a story of our country that prizes understanding over judgment, openness over dogma, and empathy over exclusion.