A recent Gallop poll found that almost a third of American workers are disengaged and unhappy at their jobs. Could a dose of nature give them a boost?

According to a newly published study, workers exposed to sunlight and natural elements in the workplace report better moods, higher satisfaction with their work, and more commitment to their employer—something that Amazon would be happy to hear, as they construct massive greenhouses for employees around their downtown Seattle headquarters. 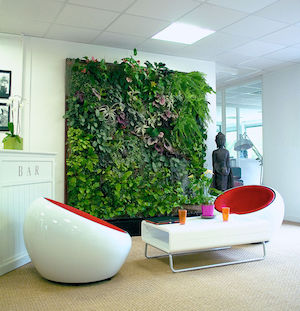 Researchers at Central Michigan University surveyed hundreds of workers from the United States and India and asked them about natural elements in their workspace, including views out of windows, office plants, and screensavers or wall prints depicting nature scenes. They also asked how much workers were exposed to direct sunlight (from working outside or being able to go outside during the day) or indirect sunlight (through windows), as well as surveying their levels of depression and anxiety symptoms, job stressors, job satisfaction, and commitment to their employer.

Analyzing the data, the researchers found that people with more exposure to natural elements in the office were less depressed, and more satisfied with and committed to their jobs, than those with less nature around them.

Even stronger links were seen for sunlight exposure. Indirect sunlight in the workplace was associated with reduced depressive symptoms, while direct sunlight was linked to increased job satisfaction and employee loyalty—suggesting, in general, that sunshine may be good for people at work.

Why might views of nature or exposure to sunlight have positive impacts on people at the office?

“There is a pretty large literature on the positive effects of nature and sunshine exposure in other settings,” says one of the study’s authors, Stephen Colarelli, though few studies have looked specifically at offices. “Nature has restorative effects, making people feel better in a variety of ways.”

For example, compared to views of walls or non-natural settings, studies have suggested that nature reduces stress, improves mood and recovery from surgery for hospital patients, and helps kids do better in school and feel more positive about their classroom experiences. Even the presence of plants in a room has been shown to increase kind and helpful behavior and well-being, which could have an indirect impact on work relationships and job satisfaction.

In this study, the results suggest that nature may buffer against the effects of stress: The relationship between job stressors and anxiety was weaker for workers exposed to natural elements, as was the relationship between job stressors and lower job satisfaction. There might be other reasons for this—perhaps workers in higher-level positions have offices with nicer views and have greater job satisfaction, regardless of stress levels—but the results held even after controlling for worker age [a proxy for greater responsibility] reducing the plausibility of this explanation.

“[Our] result helps support the notion that it is exposure to nature that is having the effects,” Colarelli says.

He notes that most companies and interior designers pay scant attention to nature and sunlight exposure, or neglect them in order to keep costs down. But, he suggests, if we want to improve well-being at work, we may want to look at environmental factors more closely.

To that end, he and his colleagues are exploring what types of natural views and built environments are most conducive to restorative effects. He’s also working with colleagues to look at the effects of nature views inside a factory environment in China. He hopes studies like these will support more efforts to bring nature into the workplace.

“We evolved in nature, and our species is adapted in many ways to a natural environment,” he says. “People are likely to feel better and experience greater well-being when their environments are in synch (are matched) with their human nature.”