When I (Dacher Keltner) was 18, I wandered into a yoga class in my first year of college, hosted on a basketball court in the school’s gym. At the time, some 40 years ago, yoga had mystical, somewhat cult-like connotations. While a handful of students waited on mats, the teacher arrived dressed in white clothes, looking like Jesus. After playing a song on a wooden flute, and reading a few Haiku poems, he led the class through a series of yoga postures. Yoga, just getting off the ground in the West, would prove to be a salve for my anxious tendencies. 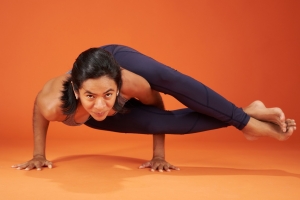 Yoga may very well be one of our oldest happiness practices. Archeologists have discovered figurines in India that date from 5,000 years ago that represent what appear to be people in yoga postures. More certain is that yoga emerged some 2,500 years ago in Indus-Sarasvati civilization in Northern India as part of Hinduism.

Many in the West are familiar with one vein of yoga practices: the asanas, a Sanskrit that translates to “postures.” The full tradition is much broader, and encompasses pranayama (mindful breathing), meditations, chanting, sutras (yoga philosophy by the sage Patanjali), kriya (internal cleansing movements), and ethical principles related to kindness, selflessness, non-materialism, and nonviolence. Over its history, yoga has evolved into many forms, from Tai Chi and Qi Gong to hot yoga and core power yoga.

Today in the U.S., more than 36 million people practice yoga on a regular basis. They likely practice one of a couple kinds of yoga that derive from Vedic yoga and involve 12 basic postures, with names like plow, fish, cobra, locust, and bow pose. In addition to these metaphorical descriptions that add significance to the body’s movements, this kind of yoga also involves the teaching of deep breathing patterns and a focus on being present and mindful.

Does this practice work? Indeed, in the past decade, an emerging science of yoga has been uncovering the significant health and happiness benefits of this ancient practice. And it suggests that we should all think about hitting the mat more often.

The health benefits of yoga

Yoga is a practice of the mind and body, and it brings about health and happiness benefits through its direct influence on our nervous system.

Central to yoga is bringing awareness to our breath, also known as the “ujjayi pranayama,” the breath of fire. Deep breathing, like the kind cultivated in yoga, activates the vagus nerve, the large branch of nerves that begins at the top of the spinal cord and stimulates activation in the vocal apparatus, muscles that move the head and eyes, heart, respiration, digestive organs, and gut. Elevated vagal tone is good for a host of bodily functions, like digestion and immune function.

Some forms of slow yoga breathing involve contracting the glottis muscles in the throat, which improves the heart’s capacity to efficiently regulate blood pressure, and there’s some evidence that practicing yoga can reduce blood pressure.

In a recent study, 29 participants were randomly assigned to a four-month training program of either stretching or yoga respiratory exercises (ujjayi breath). During that time, the yoga group improved their inspiratory and expiratory pressures, the low/high-frequency ratio of heart rate variability, and heart rate variability itself—all markers of better cardiovascular and respiratory function. Simply stretching didn’t have the same effects.

In another recent study from a team at UC San Diego, 38 people who participated in a three-month yoga retreat showed a decrease in inflammatory processes, an immune response related to high blood pressure, diabetes, and autoimmune disease.

Given these shifts in the cardiovascular and nervous systems, it makes sense that yoga is good for our health. A regular practice can help loosen the muscles and connective tissues around the joints, which in turn can reduce aches and pains. In one recent study, 75 rheumatoid arthritis patients were randomly assigned to an eight-week yoga program or a waitlist. Rheumatoid arthritis, a painful condition that involves tender, swollen joints, is estimated to affect 54 million Americans each year and cost the health care system $19 billion. The patients who practiced yoga saw significant improvements in their experiences of physical pain, general health, vitality, and mental health, and these reductions in pain lasted nine months after the study ended.

According to other studies, practicing yoga can help reduce people’s stress, anxiety, and depression—perhaps better than traditional medication if you practice daily for over a month. Yoga has also been found to be an effective way to help people overcome addictions. In light of these findings, it’s not surprising that regular practitioners of yoga report being happier.

How yoga makes us happy

Yoga also shifts our brain chemistry. In one study, Chantal Villemure and colleagues from the National Institutes of Health used magnetic resonance imaging to examine gray matter in the brain, which naturally declines with age. They found that yoga practitioners had less grey matter decline in regions of the cortex involved in the experience of positive states such as joy and happiness.

Finally, yoga has been found to increase activity in the anterior cingulate cortex and the medial prefrontal cortex, brain areas that are associated with empathy, gratitude, and kindness. In other words, practicing yoga may help us experience more positive emotions and be more oriented toward others, both of which can create lasting happiness over time.

Eight years ago, I (Jaylissa Zheng) moved to New York. It was a move that left me suffering from many of the struggles that are rampant today: anxiety, sleeplessness, poor appetite, and a sense of despair. Medication did little, if anything, for my suffering. So I turned to yoga; I became a yoga teacher. And in performing and teaching this ancient happiness practice, I have found an embodied source of ever-richer resilience. Perhaps you, too, can find new meaning in one of the human race’s oldest happiness practices.