From day one, I knew that it was going to be a different kind of mindfulness class. But I was ready. I could handle this. I had years of teaching teens under my belt, a number of which were in inner-city schools. But I was an experienced-enough teacher to know that I was going to have to be on my toes—the whole time.

As a mindfulness and self-compassion researcher working with teens, my goal has been to help them navigate what is often a very difficult life stage. Now, I was interested in implementing a mindfulness program with a group of at-risk students because they had more obstacles than the average teen, including language barriers, economic challenges, and issues of acculturation. Not much research had been conducted on mindfulness with at-risk youth, and I wanted to know if it would work. Could learning awareness and acceptance actually help the teens who were struggling the most? 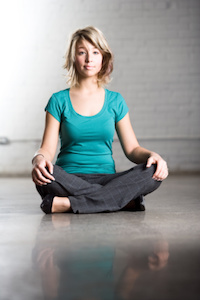 The school where we launched the mindfulness program and conducted a study was an alternative high school, a small public school for students who had not been successful at their traditional high school. Many had issues of substance abuse and behavioral challenges. Many had been involved in the legal system; a number were parents or pregnant. All had histories of academic failure.

The first class went alright, probably because students were a bit apprehensive of me and maybe a bit curious about this “mindfulness” stuff. But by class two, they were over it. This strange woman came in off the street to teach us about—what, paying attention to a raisin? Are you kidding?

Despite my admonition, one student took a phone call in the middle of class, saying it was her employer; a second student left to “use the bathroom” and never came back. In class three, it was all I could do to keep the students in the room. Oh, and the raisin activity? When I asked them to pretend they were aliens and roll the raisin around in their fingers and tell me what it felt like, one lanky, sweet-faced boy said “a nipple.” Things were rapidly deteriorating.

One of my research mentors told me I could call off the project, but I recalled what the principal of the school had said at our initial meeting, looking straight at my collaborator and me: “If you want to teach mindfulness here, fine. But you have to commit to finishing out the semester. You can’t give up and leave in the middle. These kids have experienced adults giving up on them too many times in their lives.” There was no question. I was in for the long haul.

I talked to the principal and social worker about my struggles in class, and both were extraordinarily supportive and understanding. They had seen all this before. The principal suggested that I come to school another day during the week to “hang out” with the students to build trust, so I agreed. The school nurse had some experience doing restorative yoga with the students and suggested doing it in class; I thought that would be fine. I figured I had nothing to lose.

Since class four began with a body scan, and we had no room to do this in the classroom where we were meeting, we opted to have class in a corner of the gym. Students lay down on yoga mats, cushioned with zafus under their heads and zabutons under their legs. Some had their coats draped over them for warmth. Not your traditional body scan, but this wasn’t your traditional mindfulness class, either. And so I began: “Notice the sensations in the toes on your left foot…”

And something shifted. It was subtle, but perceivable. The kids were calmer. More settled, and a bit quieter. From then on, we had every class in the gym, and every class began with either a body scan or a restorative yoga session led by the school nurse and accompanied by “gentle” music.

Throughout these weeks, I sought advice from the author of the curriculum we were using, Dr. Trish Broderick, who was wholeheartedly supportive of my adjusting the curriculum to meet the students’ needs. When I expressed concern that we might not get to parts of the curriculum if we continued to do the body scan in each class, she encouraged me to just go with what was working with these students. So body scan it was.

Through surveys taken after the second class, we found that students did not initially think that learning mindfulness would be all that effective, but grew to be more accepting of it over time. (In contrast, students who were in the “control” class, a substance abuse prevention program, initially had a greater belief in the effectiveness of their class, but became less sure of its usefulness as the semester wore on.) Also, while depression among students in the control group nearly doubled over the course of the semester, the mindfulness students decreased in depression by about 30 percent.

By the last class, students were able to share certain insights that elucidated what worked for them. Below are a collection of five suggestions that can help anyone trying to teach mindfulness to at-risk teens:

The choice of physical space is paramount. These students were clearly uncomfortable—even distressed—with being in the classroom, which for them had associations with failure. As one student said, “If you’re in a classroom, you don’t really feel relaxed all the way…I wouldn’t be able to be completely chill in the classroom.” And another stated definitively, “We were going crazy in the classroom.” In contrast, the gym was where they “had fun and stuff.”

In the gym, they could relax and let down their guard; “you could take your shoes off, you know, and kick back,” one student said. The need for students to have a “safe place,” a place where they could relax and feel protected, was critical to the success of the mindfulness class. At one point, I recall looking out at the dozen or so adult-sized teens wrapped in coats, “tucked in” by the school nurse with meditation cushions and yoga bolsters, scented eye masks covering their eyes. Like baby birds in the safety of a nest, they seemed sheltered, secure, and at rest.

When possible, utilize school personnel as assistants in the class, or have them at least be present. Research has shown that school programs tend to work better when they are implemented by school personnel, rather than outside experts. The reason is pretty clear—just remember how you (or your fellow students) used to treat substitute teachers. If school personnel can’t implement the program, having someone at least in the room will give it a sense of validity in the eyes of the students.

As mentioned above, these students had a history of having adults give up on them. Understandably, then, they were often mistrusting of adults from the “outside.” In contrast, many had positive and trusting relationships with teachers and school staff, and they felt safe with them. Unlike me, the school nurse was an “insider,” and was able to help facilitate students’ slowly—very slowly—growing trust in me as well. 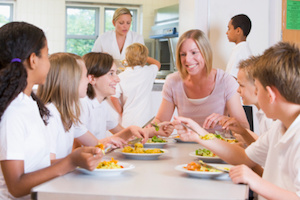 It was important to spend time with students outside of class to help build trust. From the beginning, I stayed after class to have lunch with them. There is something about “breaking bread” that eases tension and equalizes people. It wasn’t always easy—naturally, the students preferred to chat with their friends than with me—but I persisted. The girls were patient with my halting Spanish, and they shared photos from their cell phones of their babies, while I shared photos of my grown daughters.

At the principal’s suggestion, I also came to the school on another day during the week when students had an elective class. Initially I thought the “sports and games” elective would be mostly board games, but it wasn’t; it was sports. I was WAY out of my comfort zone, but my stubbornness refused to let me give in to my insecurities. I was a goalie in soccer, and, well, stayed on the sidelines passing out equipment during football. But at least I was there.

It paid off—by the end of the semester, students began comments with “Now that you’re part of the school…”; one student suggested that I chaperone an upcoming field trip to Washington, D.C. My discomfort on the basketball court was worth it; I had moved from being an “outsider” to being an “insider.”

4. Give them freedom to choose

Teens need to be able to make the choice to participate in mindfulness activities and meditations. Developmentally, they’re at a stage when they feel they should be able to make decisions for themselves, and yet they often are not mature enough to make some of them. For this reason, it is important to provide teens with choices whenever possible.

The decision about whether or not to engage in mindfulness practices can be theirs. And let’s be honest: You can’t make them participate anyway. You can’t make someone meditate…and why would you want to? Being too heavy-handed with the program would only result in backlash. At the same time, it’s important to clarify that if they choose not to participate in meditations, they are not free to disturb others who might want to.

Instead of judging students for not participating, try to trust that they will participate when they are ready. When they finally do, they’ll be able to get something out of the program. As one student reflected, “I liked this class because it’s the only class where you actually have the time to relax and think about yourself and how you’re doing in your life, and I feel like your mind is calm for a few minutes.”

5. Be flexible with the curriculum—within reason

Most mindfulness activities are designed to get at the same thing: to bring awareness and nonjudgmental acceptance of present-moment experiences. The specific practices we use—whether we focus on the breath, physical sensations, or sound—are incidental.

For example, when engaging in restorative yoga, students listened to relaxing, “new age” music, and were invited to turn their attention toward the sounds. When their minds drifted, they were encouraged to bring their attention back to the tones of the music. When it became clear to me that the students had an affinity for more concrete practices such as restorative yoga and the body scan, I made the necessary modifications and started each class with one of these practices.

Luckily for me, I was able to get the “green light” from Dr. Trish Broderick, author of the Learning to BREATHE curriculum that we were using, to do so. But making those decisions requires that the teacher have a deep understanding and embodiment of both mindfulness itself and the way it is delivered through the curriculum being used. There are no shortcuts here; embodying mindfulness requires a depth of practice.

In the end, teaching mindfulness to at-risk teens is not very different from what good teachers do every day: tuning in to the needs of their students very directly and honestly, readily adjusting the curriculum to meet those needs, and then fine-tuning their efforts and re-calibrating their goals.

One of our students said, “I really appreciate this class. It gives you a chance to think and not have to worry about what’s going on around you.” And as a teacher of teens who live immersed in worry and chaos most of the time, this means a lot.