In a recent study, researchers in Boston found that practicing yoga for just one hour may help relieve symptoms of depression and anxiety.

The study involved a sample of 19 adult volunteers, eight of whom were regular yoga practitioners and 11 who were not. Each participant completed an hour-long session in the researchers’ lab: The yoga practitioners spent their session doing breathing exercises and yoga poses; the other 11 participants read a book or magazine. 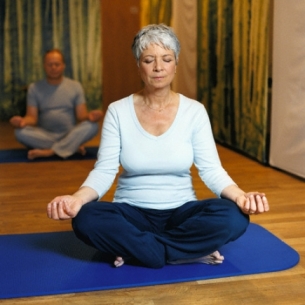 Brain scans measured the levels of the neurotransmitter gamma-amniobutyric (GABA) in each participant immediately before and after their hour-long session. GABA levels are known to be low in people diagnosed with depression and anxiety.

Compared to their levels beforehand, those in the yoga group showed signifi cantly higher GABA levels following their session. The readers showed no change in their GABA levels.

But don’t run out to buy a yoga mat just yet—there are still a few gray areas. For one, those in the yoga group had all practiced yoga for at least two hours per week over the previous four months, if not longer. It’s not clear how their prior experience may have factored into the study’s results. Also, the researchers note that they did not examine whether other exercise, such as walking, might produce the same effect.

“It’s quite possible that physical activity [in general] might increase GABA levels,” says lead researcher Chris Streeter, an assistant professor of psychiatry and neurology at Boston University School of Medicine. “We would like to do a study that looks at that.” Streeter and her team next plan to study whether training beginners in yoga affects GABA levels over 12 weeks of instruction.

Regular yoga and exercise improves circulation and
efficiency throughout the body, including in the brain,
and can help ward off the memory loss that comes
with aging. Exercise also makes you more alert and
relaxed, and can thereby improve your memory
uptake, allowing you to take better mental pictures.

The article doesn’t mention how many males/females were involved in the study. I’m curious as to whether the positive effects would be the same for both genders.
http://www.mfsblog.com