When I was in fifth grade, I picked up Jane Yolen’s Holocaust novel The Devil’s Arithmetic, and my world shifted. The book introduced me to a terrifying historical reality: Just a few decades before, the Nazis had killed millions of people simply because they had been born into a particular religion. The horror of the crematoria resonated all the more because so many of my school friends were Jewish.

In the following years, I found myself returning over and over to the Holocaust section of the library, having committed to memory its Dewey decimal number, 940.5318. I devoured personal narratives about the genocide like oxygen. 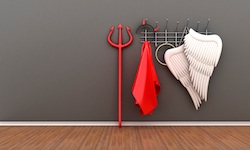 As my interest grew, I could sense the faint disapproval, or maybe just the uncertainty, of adults around me—why didn’t I focus on something else, something more positive and uplifting? But it wasn’t enough to disrupt my exploration of the questions that tormented me. How could such evil have been unleashed on the world, and how did it affect the people caught up in it?

My impulse to turn toward the very things I hate and fear—death, mayhem, destruction—is hardly a unique one. Humans have long fixed a penetrating collective gaze on evil and disaster. We rubberneck in the wake of car crashes; we pore over biographies of serial killers and tyrants. And as any screenwriter will tell you, many people think stories about unalloyed good are boring. It’s the bad guys who hold our interest, from celluloid villains like Lex Luthor to world leaders who spout racist rhetoric.

So why are so many ordinary people so drawn to the dark side? It’s not because they’re clandestine villains. Wanting to wrap your mind around evil and chaos doesn’t make you evil, unless you’re driven to commit real-life hateful or destructive acts. According to Stanford psychologist Philip Zimbardo, an in-depth, nuanced knowledge of evil can actually be a virtue—such knowledge helps us identify evil more readily and resist it when necessary.

“Evil comes in many forms,” Zimbardo says, “with various disguises that are vital to understand before engaging that perennial adversary.”

The benefits of knowing evil

Psychologist Carl Jung was among the first in the modern era to call for exploration of the human dark side. Jung spoke of a personal “shadow”—a representation of everything flawed, selfish, and base in us, and argued that an intimate knowledge of the shadow is essential for growth. “One does not become enlightened by imagining figures of light,” he wrote, “but by making the darkness conscious.”

While probing into the vile and the profane can be profoundly uncomfortable, there are concrete benefits to doing so.

From an evolutionary perspective, familiarizing yourself with what you fear and dread likely pays survival dividends. “You would pay attention to, and have interest in, the horrific,” writes Penn State psychologist Marissa Harrison, “because in the ancestral environment, those who ‘tuned in’ to horrible events left more descendants, logically because they were able to escape harmful stimuli.” Those attuned to members of a rival tribe plotting an assault, for example, would have been better able to defend themselves, warn others, or flee before it was too late.

Even today, our self-preservation impulse helps explain our determined attempts to understand evil. In a 2010 study of why women were drawn to true-crime books, University of Illinois psychologists argued it was at least in part “because of the potential life-saving knowledge gained from reading them.” “We can ill afford to overlook a potentially dangerous person or situation—it could be fatal,” says University of Richmond psychologist Scott Allison.

But a detailed knowledge of evil confers advantages beyond mere physical survival; it can also help us resist our basest moral instincts and guide others in doing so.

Zimbardo demonstrated this in the early 1970s when he carried out his infamous Stanford Prison Experiment. The mock jail he set up in Stanford’s psychology building, where “guards” abused “prisoners” with impunity, revealed the speed with which ordinary people can begin to carry out depraved acts in a toxic environment. His insights into what he calls “situational evil” have helped a variety of organizations take steps to prevent such abuses in the future.

Other research supports the idea that understanding evil deeply can serve as a kind of inoculation against it.

A 2012 study reveals that immersion in the reality of genocide motivates people to combat prejudice when they see it. College students who took a 15-week course in Holocaust and Genocide Studies said the course awakened their desire to fight discrimination and empowered them to make changes in the world around them. A Scottish government study reported that Holocaust education programs achieved similar results with elementary-aged students; after the programs, most were more likely to state that racism was unacceptable.

How to prevent evil overload

Of course, it is possible to overdose on evil, so to speak—to focus on it so intently that your entire outlook darkens, your frame of reference narrows, and you descend into apathy. This risk intensifies when examples of depravity start flying at you fast and furious, as during a personal crisis or a governmental upheaval.

Looking closely at your motivations and thought patterns can help you determine if your fixation on the malign serves you or holds you back. If your obsession ends at poring over online morgue photos of murder victims or bidding on serial killers’ paintings on eBay, it’s probably not all that helpful, to you or to society at large.

But if your venture into the depths of human evil motivates you to resist evil in the real world or educate others about how to resist it, it’s a productive—even virtuous—use of your time. It may help to seek company when you visit a museum or even read a book. In other words, get yourself a buddy or a team to help you try to understand evil, to help keep things in perspective.

More than two decades after I picked up my first Holocaust book, I can testify that my seemingly deviant teenage preoccupation has been worthwhile after all. In college, my interest in the genocide steered me to a travel fellowship program that allowed me to study diaries and letters French Jews wrote during the Nazi era, a project that evolved into my senior thesis. Later, my questions about how ordinary people came to commit extraordinary harm led me to Zimbardo’s work on situational evil. That, in turn, led me to his later research on how to resist evil influence and behave heroically, as many Holocaust rescuers did.

Inspired by Zimbardo’s unexpected trajectory, I wrote a book about research on heroism, selflessness, and how to foster these qualities—one that would probably never have come to be if it hadn’t been for the distraught moral inquiry I began years before. Like me, you may not be able to predict just how your interest in the human dark side will shape your future. But as long as it spurs you to principled action, you won’t get sucked into the morass yourself. In fact, you may be uniquely equipped to help pull the world out of it.