When 20-year-old Michael Brandon Hill stormed into Georgia’s McNair Discovery Learning Academy on August 20, he toted an AK-47 and broadcasted his intent to kill as many people as possible.

He was met by school clerk Antoinette Tuff. Through a quick exchange with Hill, Tuff intuited that he was a troubled young man who needed encouragement. Tuff had been through her own share of difficult times, so she understood why Hill might resort to a desperate act. She felt terrified and wanted to flee, but instead she stood her ground—by extending compassion to the would-be shooter. 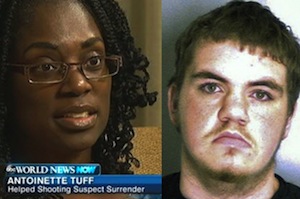 “We all go through something in life,” she told him. “I tried to commit suicide last year after my husband left me. But look at me now. I’m still working and everything is okay. It’s gonna be all right, sweetheart. I just want you to know that I love you, okay?”

Touched by Tuff’s generosity, Hill gave up his gun.

In the wake of last year’s massacre of 20 children in Newtown, Connecticut, National Rifle Association president Wayne LaPierre famously said, “The only thing that stops a bad guy with a gun is a good guy with a gun.” Tuff was not a guy and she did not have a gun—and yet not a single life was lost in the Georgia standoff.

By using compassion, not violence or aggression, as the guiding principle for her actions, Tuff demonstrated that real-world heroism doesn’t have to conform to LaPierre’s traditionally masculine ideal. And when the world learned what Tuff had done, hundreds lobbied for her to receive the Presidential Medal of Freedom, the U.S.‘s most distinguished civilian honor—an award that was given this year to late astronaut Sally Ride and activist Gloria Steinem, among others.

In fulfilling their selfless potential, the most outstanding female heroes of our time encourage other women to step into their own heroic identities. But more than that, they ask all of us to stretch our ideas about what constitutes heroism. How can we ensure that future generations include plenty of Antoinette Tuffs and Gloria Steinems—as well as men who are able to respond heroically to threats with the same compassion and empathy that Tuff did that day in August?

Anatomy of a hero

For much of history, aggression, dominance, and maleness were all but synonymous with heroism. The mythical hero Hercules was supposedly the strongest mortal who ever lived; Achilles of the Iliad had a quick temper and an insatiable bloodlust; and the muscle-bound Colossus of Rhodes stood astride one of the busiest harbors in ancient Greece, a larger-than-life reminder of that culture’s heroic ideal.

Joseph Campbell’s The Hero With A Thousand Faces sketches out the contours of the classical hero’s journey: a male protagonist ventures forth, and following a series of struggles (external, internal, or both), triumphs over evil and saves others from destruction. As late as the 2000 Olympics, University of Florida researchers found that male athletes were more often portrayed in commercials as emerging victorious in battle.

Possibly. One Northwestern University study reported that people who win Carnegie heroism medals by pulling off feats like saving someone from a burning house are disproportionately male. Though there are plenty of exceptions to the rule, heroes who take the most extreme risks are typically men—take New York City “Subway Superman” Wesley Autrey, who jumped in front of an oncoming train to save another commuter who’d fallen onto the tracks. Differences in size, muscle mass, and temperament may account for some of this gender imbalance; occupations that most often involve heroic rescue, such as firefighting and police work, tend to be heavily male-dominated.

But across a wider range of selfless activities, say social psychologists Selwyn Becker and Alice Eagly, women perform just as many heroic deeds as men, if not more. Living kidney donors, Peace Corps members, and overseas Doctors of the World volunteers are all more female than male. While women may be underrepresented as “action heroes,” they take plenty of risks on others’ behalf.

But they’re selective about which risks they take; Eagly notes that women tend to opt for those that support fellow human beings and enhance relationships. They engage in a complex mental calculus in which they weigh the perils of taking action against the benefits it provides to others.

Sometimes, this means putting their health or well-being at risk, as female kidney donors do. Other times, they put their lives on the line—as did young San Francisco mom Keenia Williams, who dragged a truck driver more than 65 feet to her car when the diesel fuel in his tank went up in flames after a crash. Williams was no adrenaline junkie or strength trainer, but she felt compelled to intervene because she saw a fellow human being in need of help.

Similarly, it was Tuff’s unusual empathy for Hill that helped her defuse a dangerous situation before it could turn into the next Newtown. But despite these examples, Philip Zimbardo finds that women tend to view “a lot of heroic action as not heroic.” Instead, he says, they frame their selfless action as obligation or sacrifice—as in, “This is what I do for my family.”

How to make more heroines

How can women begin to envision themselves behaving heroically, given the testosterone-drenched archetype of the heroic rescuer?

We still have a ways to go, of course, in recognizing women as heroes in their own right: A 2010 survey of recent Hollywood films found that just 15 percent of leading ladies were portrayed as the story’s main hero, and well over half of female heroes were submissive to male characters. Nevertheless, the gradual cultural shift toward less gendered versions of heroism has supplied young women with a more diverse assortment of heroic female role models.

“Heroism for females looks a lot like heroism for males without the action element,” says San Francisco psychologist Robin Rosenberg, editor of Our Superheroes, Ourselves. She points to Harry Potter’s female counterpart, Hermione Granger, as a character who inspires thousands of readers by taking risks to benefit others. “She’s mentally tough. She’s persistent, resilient, smart, creative and loyal to those she loves. And she has integrity.”

It’s not just fictional heroic women that are rising to the fore—real-life female heroes who radiate compassionate concern are also multiplying in the cultural lexicon.

The acclaimed documentary film Anne Frank Remembered and the book of the same title showcase the heroic journey of Miep Gies, whose parents sent her to Holland when she was young because of a food shortage in her home country of Austria. Gies’ own suffering during childhood motivated her later on to help people enduring tough times. She cared for Anne Frank and her family in the “Secret Annex” for more than two years before an informer betrayed them to the Nazis.

Erin Brockovich, who investigated PG&E’s dump of toxic chemicals into the California water supply, and social reformer Susan B. Anthony have also been widely celebrated as heroes—not because they hew to the traditional heroic ideal, but because they made immense sacrifices for a cause larger than themselves.

The selfless examples we absorb through literature and observe in real life can profoundly change the way we think about our own heroic potential. In one of Eagly’s studies, people who read about a woman carrying out a heroic rescue were more likely to endorse the possibility of female heroism later on.

As society moves toward more realistic and accessible depictions of female heroes, heroism researchers and activists are working to broaden traditional definitions of heroism in ways that embrace women’s contributions.

“I want to democratize,” Zimbardo says. “Anyone can be a hero if you help others in need, defend a moral cause.”

The democratization of heroism is good for everyone—men as well as women—because it rejects the idea that we’re unfit for heroic action just because we don’t meet a certain cookie-cutter standard.

For both sexes, the key takeaway of Zimbardo’s message is that we can seek out heroic pursuits that align with our individual strengths. What’s important is not trying to emulate Superman (or even Wonder Woman), but knowing ourselves well enough to draw on the skills we do have to serve others.

While our culture’s portrayals of heroic action still have a decidedly violent slant, we’ve evolved somewhat since Achilles and Odysseus. Heroism is no longer quite as associated with traits like aggression; we count nonviolent social activist Martin Luther King among our most revered heroes, and the annual list of “CNN Heroes” includes plenty of career altruists, female and male. Young boys can now aspire to alternative images of heroism as nonviolent activism or altruistic sacrifice. And perhaps, if men renounce LaPierre’s narrow heroic ideal and behave more like King or Tuff in the face of danger, they may be able to resolve difficult situations with far less collateral damage.

Tuff’s conduct since Hill gave himself up proves that her heroic act was not a fluke, but a natural expression of the kind of person she is. “I would like to go back and visit him. I would like to contact him and just see how he’s doing,” she told Anderson Cooper. “He’s a hurting soul, and so any kind of way that I can help him get on the right path.”

Her example hints at the social transformation that’s possible if all of us—men and women alike—reject knee-jerk aggression in favor of extending compassion and serving the greater good. It’s a heroic ideal that’s time-honored and strikingly modern all at once.