Say you’re at dinner with your conservative-leaning colleagues when people start talking about how immigrants are taking jobs away from hardworking Americans. Then, someone turns to you and asks for your opinion. 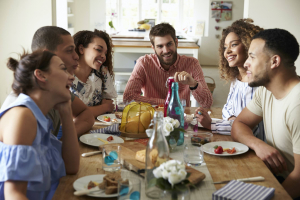 You may strongly disagree with their views, but you’d rather not “get into it” with them. So, you tell the table that you’re neutral on the subject or that you don’t like to discuss political issues at work. You hope this will placate folks and preserve your relationships with them.

But a new study suggests that there is a cost to that tactic and it may be the wrong approach. Stating your opinion, even if it’s in opposition to others’ opinions, can build more trust and cooperation than staying neutral.

In the study, researchers asked different groups of people about their views on hot-button moral and political topics—such as abortion, gun regulation, immigration, or kneeling for the national anthem. Then, they exposed the participants to real or hypothetical situations in which someone (an actor, politician, professor, colleague, etc.) was asked for their thoughts on that issue while facing a friendly or hostile audience. For example, a liberal politician might be addressing conservative voters when asked about his views on gun control, or a conservative professor might face questions from her more liberal students on a woman’s right to choose.

In the scenarios, the person either gave an answer that supported or opposed their audience’s views or tried to stay neutral, by saying things like “The issue is quite complex” or “I’m just not taking either side.” Participants then made inferences about the speaker’s actual beliefs and reported on how trustworthy they seemed. In some situations, they also rated how likable and (for politicians) vote-worthy the person was; in others, they were given an opportunity to cooperate in real time with that person.

Over several different versions of the experiment, participants said they assumed a person who didn’t share an opinion most likely held opposing views to their audience—not a big surprise there. But they also trusted that person less, even if the person held an opinion contrary to their own. And they didn’t like, want to vote for, or cooperate with that person any more than someone who disagreed with them openly.

Lead researcher Ike Silver, at Northwestern University’s Kellogg School of Management, was surprised by the magnitude and consistency of this effect.

“Regardless of how the person phrased their neutrality—or whether we were looking at issues of trust, liking, or cooperation—there was a penalty for staying neutral, even relative to outright disagreement,” he says. “People disliked them as much as someone who was on the other side of the aisle—sometimes more so.”

Why would that be? Silver says that, even if you say nothing, people assume you are against the majority opinion and are just trying to protect yourself from criticism, perhaps to win over voters or fans. In that way, it can seem self-serving, manipulative, or disingenuous to not state your views.

“The inference is that neutrality is something sort of sketchy or nefarious or means someone’s lacking backbone,” he says.

Interestingly, this tendency to distrust neutrality didn’t just apply to famous people in larger group settings, like pop stars or politicians. It also played out in more one-on-one contexts.

For example, at one point, participants were asked their views on gun control and then given a choice about whom they wanted to pair with in a cooperative game. Sixty-one percent chose to play with someone who opposed their views on gun control, while only 39% opted to play with the partner who declined to take sides. In a separate experiment, when participants were randomly assigned to play with someone who agreed or disagreed with them or who claimed to be neutral, they were less cooperative with the neutral person than other players.

“If you think about conversations about voting at the Thanksgiving dinner table or conversations in the workplace about what the Supreme Court is going to do about abortion, all these situations are actually candidates for this effect,” says Silver. “People think they ought to stay out of it, and that’s what’s going to make people like them the most. But, in reality, being willing to talk a little about your beliefs can actually build trust.”

The costs and benefits of keeping your mind open

On the other hand, there may be cases where people actually don’t have a strong opinion on a moral or political issue. What then?

To see how distrust might be lessened in those situations, Silver and his colleagues had participants imagine being in a conversation with friends who had similar views on gun control when a new person enters the conversation. When the person is asked for their opinion, they either provide an opposing view or say, “I’d really rather not take sides on that issue right now,” in some cases giving a reason—like “I just do not know enough about guns or gun policy to have an opinion,” “I think there are good arguments on both sides of the gun debate,” or “I try not to talk about politics with friends.”

Participants then rated how trustworthy the new person seemed. Results showed that pleading ignorance or saying you were ambivalent significantly increased how much others trusted you, in comparison to not giving any reason at all (though saying you avoid political discussions didn’t help). But you could garner the same amount of trust simply by stating your opposition.

Though this suggests it’s hard to undo the costs of neutrality, it doesn’t mean we always have to have an opinion or state it if we do, says Silver. Sometimes neutrality is essential for work and stating an opinion would be inappropriate—like for judges, scientists, and journalists—and people should take that into consideration before trusting them less for just doing their jobs. Plus, neutrality can be laudable if it means you’re open to changing your mind in the face of new evidence.

However, if you do hold opposing views and are simply afraid of saying so, Silver’s findings suggest you’re probably better off sharing them—as long as you do so respectfully. Not only might it improve your reputation with others, it could help move polarized conversations forward by increasing trust and cooperation.

“Being willing to say what you believe, while staying open-minded and hearing what other people believe, is really important for resolving conflict,” says Silver. “For people who have opinions and want to talk about these issues, it’s a bit safer than you might expect.”