In early 2019, a Twitter thread started by comedian Patton Oswalt went viral. What set this exchange apart from everyday online squabbling wasn’t Oswalt’s original post condemning then-president Donald Trump, nor the trolling response from a follower on the other side of the political fence. In this case, something unexpected happened: a moment of respect. 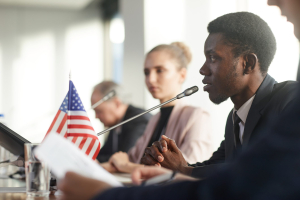 It turned out that the man trolling Oswalt had struggled with life-threatening medical issues—and serious medical debt. After Oswalt read through the man’s Twitter feed, he shifted the conversation from a political fight to a rallying cry, encouraging his followers to contribute to the man’s GoFundMe page. Instead of scoring political points, he focused on the deeper issue of helping a human in need.

Unlike Oswalt, most Americans don’t have 4.7 million Twitter followers who can band together to fund a stranger’s medical care. But research from Making Caring Common—the organization we lead at the Harvard Graduate School of Education—suggests that most of us have more power than we might think to change the tone of political discourse in our country.

Our 2020 research brief on bridging America’s political divide points to respect as key to boosting people’s willingness to engage in dialogue with their political opponents.

The brief is based on a preliminary online survey of about 1,440 people in the U.S. in early July 2020, at the height of both the coronavirus pandemic and election-related anxiety. While our survey respondents tended to find their previous conversations about politics unconstructive overall, a large majority (80%) of them said they would be “happy” to engage in these conversations in the future if the conditions were right—specifically, if they can be assured that others will listen to them respectfully.

Our survey also suggested that bridging political divides is still valuable to most people. Seven out of ten respondents agreed with the statement, “I think it’s important to get along with people who I disagree with politically” (21% said they neither agree or disagree), and 65% were hopeful that “Americans will overcome their political differences.”

Many also reported engaging in regular political conversations with those who hold opposing views. More than 40% of survey respondents reported having a conversation at least once a week with someone who doesn’t share their political outlook.

What gets in the way?

Plenty of roadblocks remain. Our survey also suggested that both Democrats and Republicans find conversations involving political difference to be either only marginally useful or not useful at all. Only 17% of survey respondents said they tended to find these conversations useful or very useful.

Both Democrats and Republicans who participated in our survey indicated several reasons why they found these conversations difficult and unconstructive. Many felt that those with opposing views relied on opinions rather than facts, for example, or they seemed unwilling to listen or modify their views.

Most survey respondents also were reluctant to support romantic relationships between their children and people with opposing political views. Only 39% of Republicans and 33% of Democrats in our survey were comfortable with their child marrying someone from the other party.

How do we approach the deep and difficult work of bridging the divisions that remain?

It’s important to note that every person’s approach to these conversations can and should be informed by their relative power in a given interaction. Oswalt had many layers of privilege relative to the man trolling him on Twitter; he risked very little in extending a helping hand. No one should have to suffer abuse or risk trauma in their efforts to reach across the aisle. These conversations also need to be guided by moral principles; the point shouldn’t be to reach some kind of false harmony that papers over injustice.

However, our research suggests that many of us are willing to engage—many more than we may think. We can begin by listening to each other, and we can try to learn about those we perceive as our opponents. We can lead with grace instead of leading with the quick burn. We can create space for respectful dialogue. And we can take pride in knowing that these small acts can add up to something much greater.

This data should be considered preliminary because of online methodological limitations that are explained in our report, Bridging America’s Political Divide. In the coming weeks, Making Caring Common will publish findings from a new national survey that takes a deep dive into this topic, along with many other facets of caring in America. We invite you to join us on Facebook and Twitter for this important discussion, and to share your own observations, thoughts, and solutions.