Are you willing to believe that you are wrong about something? 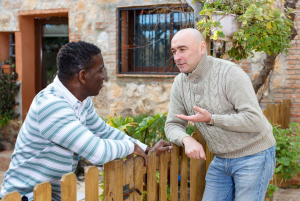 I was attending a lecture called “Civil Conversation in an Angry Age” by philosopher David Smith, and he offered a prescription for bridging divides that began with this question.

“Is it safe to assume all 63 of us are wrong about something right now?” Smith asked the virtual, pandemic-era class. In Zoom squares on my screen, heads considered, then nodded. “I think so, because we’ve been wrong about so many things before,” he continued. But there’s a problem: We don’t know what we’re wrong about. “That simple observation, ‘I’m wrong, I just don’t know what about!,’ should produce some humility,” Smith said. “Some willingness to listen.”

Smith then asked his second question to help peel us apart from our opinions so we could look at them fresh: “Which do you value more: the truth or your own beliefs?

“’Cause they’re not synonymous,” he told the class. “If I’m wrong about some things—my beliefs about everything all put together—my beliefs are not synonymous with the truth. If I value my own beliefs more than the truth, I’m going to defend myself to the death. And why would I listen to you?”

To have a chance at really hearing other beliefs, Smith teaches, you have to value truth more than your own opinion, and you have to come in with a measure of humility. With nothing more than these two questions, we can help our minds move from certainty to uncertainty, finding gaps in understanding that help our curiosity catch on.

In my new book I Never Thought of It That Way, I explore how we can have more fearlessly curious conversations across our big divides. Through my experience interviewing thousands of people and storytelling for Braver Angels, I’ve learned what the most common pitfalls in conversations are—and the practical ways to stay humble and open to get conversations back on track.

Here is my theory: To be most useful and alive, our opinions—particularly our political opinions—must be in curious conversation with each other. When we’re divided, politics feels like it’s exclusively about stopping the other side. But at its core, politics is about how we coexist wisely, how we create societies that support us in all our different priorities and preferences.

To keep our society responsive to this mishmash of people, we need to visit and revisit each other’s take on how living these days feels. Where do our political norms and structures hit or miss the mark for people—for you—and why? What concerns you? What gives you hope? This is how our opinions serve us: not by pushing us to defend our point of view to each other at all costs at all times, but by representing it in ongoing negotiations that both honor and transform it.

That’s not how we tend to hold our opinions, though—flexibly. Rather, we guard and fortify them, sharing them as beacons for the like-minded and shields against the skeptical, not so they help us explore each other’s perspectives, but so we can push for our way of thinking and stomp out the other side. What would it take, then, to help people share their opinions in an adaptive, nuanced, conversable world?

The key is to focus on curiosity and understanding. It’s the only approach that values other people as people by giving them the space to be who they are. Uncertainty that searches for truth gets there faster than certainty that asserts it. “We are more intimately bound to one other by our kindred doubts,” wrote Seattle-based essayist Charles D’Ambrosio, “than our brave conclusions.”

How do you approach opinions flexibly enough to boost your curiosity? Here’s a batch of tips. 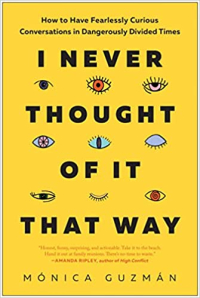 This essay is adapted from I Never Thought of It That Way: How to Have Fearlessly Curious Conversations in Dangerously Divided Times (BenBella Books, 2022, 288 pages).

If you come into a conversation holding your opinions more loosely, it can make it easier for everyone in it to explore each other’s perspectives, rather than take turns presenting and defending them. How do you do that? By offering your opinions as snapshots of what’s currently in your mind. Presenting them as changeable and movable from the start gives you room to revisit and rearticulate them as you let them mingle with others’ beliefs. It’s not to be cagey or to play down your passions, but to stay open, glide into the flow of conversation, and encourage others to loosen up, as well.

So next time someone asks you what you think about a tricky issue, try kicking off your answer with something like, “Here’s where my head’s at right now…” or “Well, here’s what’s coming to mind as I think about it. We’ll see where it goes…” You can use this trick to add some slack to the criticisms you offer, too: “When I hear you say that, all I can think is, ‘No way. That can’t be right.’ Can I tell you why I think I’m reacting that way?”

Change the question. A handy way to switch from being out to prove something to being out to learn something is to change the question you’re trained on in conversation. Instead of asking “Whose perspective wins?” ask, “What makes each perspective understandable?” If you want to be more curious when you talk to people who think differently from you, don’t try to win or change minds. It’ll distract you from a more interesting and productive conversation that, incidentally, will be much more likely to end up changing minds.

Trying to win is more likely to make you impatient and irritable, or to push you to manufacture certainty and rush to judgment, all out of a kind of desperation for some acknowledgment of your rightness that’s good for…what? Making someone else feel bad?

I know I’ve switched to the bad kind of win/lose mode in a conversation when I’m just hunting for my edge. I scout for something to sabotage: a weakness. A slipup. A contradiction to attack and exploit. I observe myself abusing rhetoric to maneuver and set traps. I zoom closer into one or another detail, getting overly picky about wording and consistency with the person’s past statements, pulling for a “gotcha,” stomping out the sparks of every good point, and reading way too much into every misstatement.

Listen longer. Your conversation’s heating up, and you’ve just asked someone to say more about their opposing opinion. They’ve started to elaborate, and you can’t wait to jump in with your response. It’s moments like these, though, where a little restraint goes a long way.

I was reminded of the importance of this when my friend Danny told me about a conversation he’d had with his father about vaccines. The coronavirus pandemic was raging, Danny had gotten the shot as soon as he could, and his father wasn’t sure he wanted one. Danny tried to stay curious, but they lost their grip on each other, and his father said he didn’t want to talk about it anymore. Looking back at what happened, Danny thought he knew why. “I would ask him a question, he’d answer a little bit, and then I’d immediately jump in with my opinion,” he told me. “I was too quick!”

Listening longer is one of the toughest things to do in a bridging conversation. How do you know you’ve done it enough? Here’s a good rule of thumb: When you’re really itching to offer a comment on someone’s opinion, make yourself ask one more question first.

Acknowledge agreement. When you’re in conversation with someone who disagrees with you, finding something you agree on is like building a basecamp partway up a mountain: You can climb higher faster. So if you listen for those points of agreement, then offer them into the conversation, you’re likely to give the whole effort a boost. “You know, I totally agree with that,” I imagine Danny saying to his father. “I would’ve preferred we had more time to test the vaccines, too.”

Untie “thought knots.” A “thought knot” is what I call the exhausting thing that happens when you’ve way overthought something, pushing your reasons and opinions so much on each other, you’re backed up into corners and nothing makes sense. You’ll know this is happening when you observe the signs of overthinking: exasperated sighs, heads in hands, rolling eyes, that sort of thing. Wherever you think you’re going, it’s not working.

The mistake I constantly make in this situation is to try to untie these knots by thinking more and pushing harder. Don’t get me wrong; you can wriggle your way out of these. But first you need to hit reset…

Hit reset. Sometimes, backing out of dead ends in conversation starts with starting over. If you’re in an in-person conversation, take a breath. Readjust how you’re sitting. Readjustments are like yawns, I’ve learned: They catch on. Within moments, whoever you’re talking to will also take a breath, sigh, pour themselves another tea or beer, and suddenly you’ve got a nice bookend to the previous combative or exhausting thread, and a great opportunity to start semi-fresh on another one—but with all the momentum and energy you’ve built up between you ready to stir you up.

If you’re not in person, try communicating your break explicitly by describing it in your text or direct message. Watch it have the same effect. “Grabbing a glass of water, hang on.” “The kids need a check-in, brb.” Then, since you’ve probably leaned on your reasoning mind a bunch, let your intuition kick in. What’s coming up as a question or good point from the conversation so far? Offer it and see where it takes you. A reset is like a pit stop. You’re not off track. Just tuning up.

Acknowledge good points. Want to turn around a conversation where everyone’s just scoring points? Try scoring points…for the other side. This is another behavior that, when you model it, can spread. If you catch yourself thinking “That’s a good point” or “Sure, that’s fair,” to anything they say (start small if you need to; it builds with practice!)—offer that up before asking your next question or making your next point. This adds that measure of humility, helps balance the conversation with respect, and builds endurance to probe deeper where opposing perspectives meet.

Say “I don’t know” when you don’t know. It’s wacky how rare this is! But nothing blocks the escalation of a bad kind of win/lose mode quite like admitting that, no, you don’t know everything (and neither does anybody else). A candid “I don’t know” is a signal that you’re not in it to win it or to seem impressive. In that sense, I find “I don’t know” to be the most critical honest answer to a question in a bridging conversation: It lets more curiosity flow from whoever wants to drop some knowledge.

Curiosity requires uncertainty, and uncertainty requires flexibility. If truth matters more than our beliefs, then we can choose to enter bridging conversations holding those beliefs more loosely, just for now, just to see what happens. It takes some courage—What if I’m talked out of a good thing and talked into an awful one?!—though, personally, I find the opposite scarier and more likely: What if I’m stressing myself out fighting monsters that aren’t there?

To be clear, I’m not saying that we let go of our convictions in conversation. Not at all. Only that we let them breathe. We let gaps appear around their edges without freaking out. Then we build the traction in conversation to present them and explore them, setting out not to prove something, but to learn something.