We’ve all been in political arguments when both sides seem deeply entrenched in their views and unwilling to budge an inch. In the heat of conflict, it may seem like your opponent lacks logic or evidence, but some recent research points to a different problem: We’re not recognizing each other’s values. 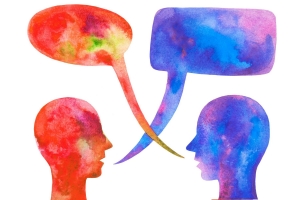 In a study published in 2015, Stanford sociologist Rob Willer and University of Toronto social psychologist Matthew Feinberg looked at how we can improve political conversations about some of the most contentious issues. They found that people often assume that everyone has the same values in mind when they discuss moral or political topics. But rather than arguing based on our own values, their experiments suggest, we might have more productive conversations if we try to recognize the other person’s values—then reframe our statements to speak to those values. As Feinberg and Willer write in a 2019 overview of the research:

Both liberals and conservatives typically craft arguments based on their own moral convictions rather than the convictions of the people they target for persuasion. As a result, these moral arguments tend to be unpersuasive, even offensive, to their recipients. The technique of moral reframing—whereby a position an individual would not normally support is framed in a way that is consistent with that individual’s moral values—can be an effective means for political communication and persuasion.

Willer stresses that arguing for our own values and against someone else’s can be challenging because of how we internalize what we believe. “People really care very deeply about their values, so you’re essentially asking someone to change who they are, and change what they care about deeply,” he says. However, by finding out what’s most important to your listener, you might find some common ground on particular issues.

That’s exactly what at least one organization is discovering today, as they put these insights to work in the field. Especially in the age of COVID-19, this research could be critical for Americans struggling for consensus around basic questions of health and welfare.

In one of their first studies of moral reframing, Feinberg and Willer found that participants in political conversations rarely took the time to explore an antagonist’s values. They asked liberal participants to try their best to convince conservatives to support-same sex marriage, and found that only nine percent of liberals made arguments that appealed to conservative notions of morality such as patriotism and group loyalty, while 69 percent made arguments based on liberal values such as equality.

The conservative participants didn’t do much better. In a portion of the study, they were asked to try to convince liberals to support making English the official language of the United States. Only eight percent of conservatives appealed to liberal values during their arguments (such as by arguing that there would be less racism and discrimination with a uniform language), while 59 percent tried to appeal to conservative values (such as by arguing that it would unify the country).

That’s unfortunate, because these studies suggest that moral reframing can help participants come to agreement around specific issues.

For example, Feinberg and Willer found that conservatives were far more likely to support same-sex marriage if they heard an argument that emphasized conservative values like patriotism. The message, in this case, was that “same-sex couples are proud and patriotic Americans” who “contribute to American economy and society.” Reading them a liberal message that emphasized equality was much less likely to make them support same-sex marriage.

Studies by others have found that pro-environmental arguments can appeal to conservatives if they are based on foundations of loyalty, authority, sanctity, and the “American way of life.” Similarly, a 2013 study by Feinberg and Willer found that conservatives showed more support for pro-environmental legislation and greater belief in climate change “when presented with a purity-based argument that emphasized how dirty, disgusting, and impure environmental degradation is.” In another 2015 study, the pair “found that liberals were more supportive of military spending when presented with fairness-focused arguments emphasizing the military’s role in helping to overcome income inequality and racial discrimination,” as opposed to ones that emphasized “American patriotism and world dominance.”

This suggests that moral reframing can be a powerful tool to help us have better conversations—but that a considerable number of people don’t know how to do it.

There are organizations trying to learn. Since the early ’90s, the Boston-based organization Youth on Board (YOB) has been working to empower young people by helping make sure their voices are represented among influential organizations.

“We started with a mission of putting young people on the board of directors of institutions, organizations, foundations, any entity that had significant influence and power over the lives of young people,” explains Carlos Rojas, the director of special projects for YOB. “Over the years, our mission broadened and our mission became to move young people from the margins of society to the center of the decisions that affect their lives.”

As YOB’s mission grew more ambitious, the organization set out to be part of local social change campaigns training local activists and leaders to be more persuasive. The work of these organizers required canvassing communities who might be skeptical of the goals of the canvassers.

In order to strengthen the social movements they worked with, in 2016 YOB launched the Listening Works project, which helps organizers develop deeper community engagement based on hearing people out. One of the techniques they developed for canvassing in particular is called the A-B-C, which stands for Affirm, Bridge, Connect.

“We start by affirming something, anything that they said, that you can resonate with or that you acknowledge as valid,” says Rojas. “You start with any affirmation that you can offer the person.” This helps build trust. The person you’re talking to feels respected and heard, even if you totally disagree with what they’re saying.

Next, canvassers are told to move into the bridging phase. They are told, for instance, to use words and phrases like “and,” “the way I see it,” and “I also think,” rather than “but.” Finally, the canvassers move into the connect phase, where they are advised to communicate their perspective through stories, such as their own life experiences, rather than facts and figures.

Rojas explained how this works on a practical basis by talking about canvassing he’s done on issues related to immigration.

“We train people on identifying legitimate motivations that people have,” he says. “I’ve had to knock on so many doors of anti-immigrant people, and one of the things they’re so often worried about is the economy and jobs.” Affirming those fears creates an opening for a different story about immigrants.

The A-B-C process demonstrates how moral reframing can be a powerful tool to connect with people who, on the surface, don’t have anything in common with our political orientation.

Insights from this experience and the research might be useful in the fight against COVID-19, by helping Americans to understand why measures like wearing masks and funding health care could be based on conservative foundations like purity, unity, and loyalty, as well as liberal ones like care and fairness. Willer and his colleagues have only recently started to apply their scientific insights to the pandemic, but they could help bridge divides between Americans who reject public-health measures and those who embrace them.

So, the next time you’re in a political argument with a friend, think about what they value rather than what you value. And think about how you can address those values while holding true to your point of view. You might be surprised how persuasive you can be. At the very least, you won’t feel like you’re talking past each other anymore.