My sons, Noah and Aidan, now bona fide adults, are perceptive, empathic, intuitive, compassionate, caring—all great qualities, right? But if I’d simply told you they were sensitive, would this word have conjured up a different image? A traditionally feminine trait, sensitivity has been equated with weakness, but it’s actually a major strength if properly nurtured. 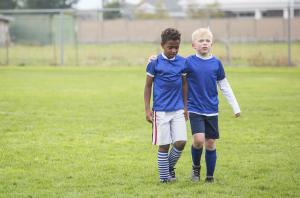 It’s time to turn this concept on its head and recognize sensitivity for what it is—a social superpower—and support this quality in our growing boys.

This article will cover why sensitive boys:

“I think of sensitivity more as an awareness, having social perception while being able to express a depth of emotion—something we used to define as more of a female trait,” says Wendy Firestone, a licensed school psychologist in Ohio who has worked with children for more than 30 years. “Sensitivity can feel like both a blessing and a curse when kids are younger, because they have these strong feelings that can feel really bad and sad. But when they get older, if they’re willing to embrace that characteristic, this ability can become a superpower.”

Richard Shaw, professor of psychiatry and behavioral sciences at Stanford University, notes that we need to rethink sensitivity from an evolutionary vantage point. “Being sensitive when you were a caveman was not a good thing, but now we have to change and adapt to a world that’s more relationship-based. [Men’s primary roles] are no longer killing animals for food, but rather being able to develop interactive teams and effectively collaborate to have a functioning society.”

Sensitive boys grow up to be more effective leaders

According to Elaine Aron, author of The Highly Sensitive Person, highly sensitive people “have more active mental circuitry and neurochemicals in areas related to attention, action-planning, decision making, and having strong internal experiences.” In other words, they’re able to proactively plan, focus, attend, and read the room.

Rather than lead through force or fear, leaders who possess sensitivity know how to relate to people and understand their needs. Sensitive individuals are more adept at helping others feel seen and heard. As a result, their leadership appears fluid rather than forced, inclusive rather than separatist.

They tend to have better social skills

Because sensitive people are more attuned to the world around them, they’re generally more aware of the give-and-take of social interactions. Social-emotional learning tools are essential to recognizing emotions and separating internal from external experiences, but with some gentle guidance, sensitivity goes a long way toward forging deep, meaningful friendships and relationships.

“Men who possess sensitivity tend to have better social reciprocity, the interaction between people on a socially meaningful level,” says Firestone. “They pick up on the nonverbal nuances of communication and dialogue. Plus, people feel more validated by them because they feel more of an emotional connection.”

Because sensitive people are often naturally intuitive, they possess the potential to learn to communicate on a deeper level. “They can pick up on what’s not being said and catch much more subtle things,” says Noah. “It comes down to understanding your emotions and that of others. If you’re in tune with your own emotions and able to express them, it gives space for others to open up, too.”

Mindfulness is a natural progression

Being in tune with your emotions in the present moment is something that comes more naturally to sensitive individuals. “I associate sensitivity with mindfulness, being aware of how your body feels, sensing the energy around you, and responding accordingly,” says Aidan. “Sensitivity leads to inner strength, the ability to realize what’s going on with yourself and others at that moment.”

Sensitive individuals who are more aware of what’s going on in the moment have the capacity to open their minds and bodies to the world around them. Practicing mindfulness is a helpful tool for both grounding and calming them. Planting a garden, playing at the beach or in the water, taking walks in nature and participating in hands-on art projects all help sensitive children focus on the present moment in a healthy, beneficial way.

Beth Steinberg, a psychologist and psychoanalyst in San Francisco, has witnessed the profound transformation of her male clients when allowing themselves to be vulnerable, an aspect of sensitivity. “In our society, vulnerability is construed as a weakness for men, while it actually promotes strength. When you’re vulnerable, you don’t have to cut yourself off from things. It puts you in a much better position to show up. You have to access those mirror neurons to feel those things, which positively affects your brain. It’s almost like a turtle losing its shell. When you can let your guard down, you develop a resilient skin rather than a brittle shell. You become more open to learning. You can take in love.”

Brené Brown touched a chord in her TEDx Houston talk on the power of vulnerability, one of the 10 most viewed TED talks in the world. She’d been raised in a “get ‘er done” and “suck it up” family and culture, similar to the way many boys are raised. “My inability to lean into the discomfort of vulnerability limited the fullness of those important experiences [that require vulnerability]: Love, belonging, trust, joy, and creativity, to name a few. Learning how to be vulnerable has been a street fight for me, but it’s been worth it.” Similarly, boys who allow themselves to experience vulnerability will live life more fully and openly than if they cloak themselves in protective armor.

Shaw believes that recognizing boys’ inherent sensitivity is a pathway to greater emotional health and more fulfilling relationships. “It depends on what you define as worthy goals in life. Traditionally (for males) they would include earning money, being powerful, having leadership roles, being successful outside the home. But if you define a happy and successful life as having personal and relationship satisfaction, possessing sensitivity—including the acts of validating other people’s experiences and being interested in them—is essential.”

When we not only acknowledge our boys’ sensitivity—the ability to be empathic, caring, and, of course, experience big, sometimes overwhelming feelings—we help carry forward a new way of regarding sensitivity. “We pass on templates of relationships to our kids,” says Shaw. “If you provide a model of relationships in which emotions and empathy are valued, that’s going to benefit our children. You’re paying it forward in a powerful and impactful way.”

Boys who learn from watching their fathers (or other male role models) experience vulnerability and take ownership of their emotions helps normalize their own sensitivity. “When one male is able to observe another male [being in touch with their sensitivity], it frees them and releases them from their stoicism while also modeling healthy behavior,” observes Firestone.

Healthy boundaries and social-emotional communication tools are essential to learning how to manage sensitivity in a positive and productive way. “Sensitivity needs to be fostered and normalized. It’s important for parents to talk about feelings, be mindful, and establish healthy boundaries, especially since sometimes sensitive children internalize other people’s issues and take them on as their own,” says Firestone. “Just as athletes need training and guidance, so do sensitive kids.”

Validating emotions is also key. “Let your child know every emotion is OK,” she adds. “Sometimes kids don’t understand. They have these big feelings and don’t know that it’s OK to have them. Empower kids to accept their emotions, big or small, but also understand that they can’t always act on them. Instead of simply being reactive, it’s important to give boys the tools to know what to do with their feelings.”

With all that’s going on in the world, sensitive children tend to take on more than they can handle. Firestone recommends parents to talk with their children about what they do and don’t have control over. “Help them find ways to be proactive, but understand they don’t need to take on the weight of the world. If they’re concerned about the environment, for example, they can plant pollinating flowers to attract bees, plant a tree in someone’s memory, or buy recycled products. In this way they’ll recognize what they have control over and what they need to let go of, which really helps.”

Lastly, practice listening and understanding. Talking through experiences without judgment, practicing mindfulness, and letting yourself recognize your own vulnerability will help mirror healthy behavior, while also bringing you closer.

As someone who’s raised two sensitive sons, I can tell you that, yes, navigating life as a highly attuned, intuitive boy can be challenging, especially with peers. But it can also be incredibly fulfilling as they gain resilience and social adeptness and establish healthy boundaries. Glennon Doyle believes “being sensitive is a superpower that will heal the world,” and I agree—in both small moments and big ones—I’ve seen it firsthand.

This article was originally published on The Tot. Read the original article.