When our three-year-old daughter started preschool, the director of the center gave us some feedback: “Your daughter is sensitive,” she said. “She’s going to have a hard time in life.” As young parents, my husband and I were bewildered. The administrator’s words felt like a hex. 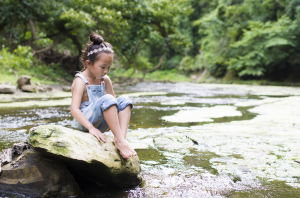 The word sensitive often has negative connotations in U.S. culture. Calling someone “too sensitive” can imply they are weak or inferior, and it can be used to discount their perspective and feelings.

But sensitive people should take heart, and their caregivers and educators should take heed, according to Dr. Thomas Boyce. In his new book, The Orchid and the Dandelion: Why Some Children Struggle and How All Can Thrive, he argues that there is a biological basis for sensitivity, that sensitive people exist for a reason, and that given the right environments they can thrive and remarkably outperform expectations.

Boyce is a professor of pediatrics and psychiatry at the University of California, San Francisco, and co-director of the Child and Brain Development Program at the Canadian Institute for Advanced Research. For more than 30 years, along with colleagues and students, he has been systematically investigating the question of how we become who we are, and why some of us thrive while others succumb in the same circumstances. This has led to some of the most profound scientific insights about child development.

Approximately one in five people is exquisitely biologically sensitive to life around them, concludes Boyce. According to scientists, this group has a differential susceptibility to their circumstances. They are more open, permeable, and tender to their surroundings, for good and for bad. Like an orchid, if they are planted in supportive, nurturing environments, they will bloom into the most superb flowers; if they are in the wrong soil—mired in adversity—they will be more devastated than the average person. Dandelion children, on the other hand, seem “constitutionally untethered” to their environments, which don’t seem to matter as much to their ultimate development.

Human sensitivity exists on a continuum where the vast majority of people are somewhere in the middle. Orchid children are the 15-20 percent on one extreme end. Although sensitivity may coexist with qualities like shyness, introversion, sensory sensitivities, or challenges with new situations, Boyce claims, they don’t always go together. Interestingly, there are no gender differences in sensitivity.

Over thirty years of research has revealed that orchids experience a cluster of physiological symptoms. When Boyce’s team studied thousands of young children, they found that about one in five were more stress-reactive. Their levels of the stress hormone cortisol (measured in saliva) and their fight-or-flight systems (measured by heart rate) reacted more quickly, easily, and intensely to mild stressors than the other 80 percent of children’s.

Stress-reactive children had greater brain wave activity in the right prefrontal cortex, behind the right forehead, an area involved in emotion regulation, impulse control, and planning. Their skin was cooler over the right forehead, and their right inner ear was warmer than the left, reflecting blood flowing into the right prefrontal cortex to provide oxygen for the ramped-up neurons working on regulating emotions. These children were also more likely than the other 80 percent to experience depression or anxiety.

In one study, Boyce’s team assessed children entering first grade, and again when they entered seventh grade. They found that teachers mattered a great deal to whether orchid children fared well or not. If highly sensitive children experienced a lot of conflict with their first-grade teachers, they had “concerningly high levels” of mental health problems by seventh grade. Orchid children who experienced little conflict with their teachers in first grade had extraordinarily low rates of mental health problems. The trajectories of dandelion children were barely affected by the quality of their relationships with teachers.

Boyce reports that other studies show similar trends in physical health: If orchid children are in supportive, nurturing environments, they are the healthiest of all the children, with the lowest rates of infections and injuries. However, if they grow up in a climate of adversity, trauma, or poverty, they are the sickest children, and even enter puberty earlier.

Why would nature design a subgroup of humans so sensitive to environmental conditions, compared to the more impervious majority? Boyce’s explanation, and that of a number of scientists, derives from the idea of “conditional adaptation”—that there are mechanisms in the human body (the epigenome, which regulates gene expression) monitoring specific aspects of the environment (e.g., nutrition or threat) that adjust our biological development so we have the best chance of surviving in the predicted environment. For the vast majority, average adjustments will suffice. But nature has reserved this special population who responds more nimbly in harsh conditions (hence their heightened reactivity), or makes more elegant contributions in placid and calm conditions, as a way of hedging bets on human survival.

The singer-songwriter Jewel became popular while my children were young. “Please be careful with me,” she crooned, “I’m sensitive and I’d like to stay that way.” I looked for ways to support both of my children, helping them discover how to express their gifts, while developing skills to navigate challenges. 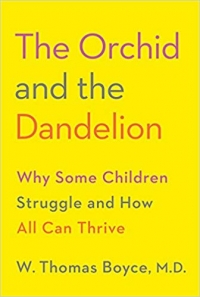 The Orchid and the Dandelion: Why Some Children Struggle and How All Can Thrive (Knopf, 2019, 304 pages)

The old mindset toward sensitivity was to “toughen up,” and my daughter still remembers teachers’ admonishments to “pull herself together” as she was relegated to the time-out stool. But too much exposure can overwhelm, writes Boyce, while too much sheltering can become coddling. He offers one chapter that describes how parents and teachers can support orchid children, suggesting things like predictability and routines, positive classroom climates and skilled teachers, space and respect for their different voices and opinions, support for their interests, time to play and fantasize, and swift action when trouble brews.

Boyce has experience raising his own sensitive son, who loved painting and drawing and once declared that “orange is the most misunderstood color.” Thoughtfully shepherded, his son went on to become an award-winning theater set designer and theater professor. My own daughter also is a successful artist, deeply embedded in a like-minded and supportive community; her latest work explores sensory overstimulation in temperature, sound, and color.

Like many research psychologists, Boyce places greater emphasis on reducing risks, and only toward the end of the book does he seem to relax into truly honoring the gifts of orchid children and exploring how to help them flourish. Nonetheless, The Orchid and the Dandelion is an erudite read of how progress is made in the relatively new field of developmental science. It is also an unusually intimate revelation of a renowned scientist’s personal feelings, as he makes sense of the lives of people he cares for, and harnesses those strong emotions to fuel rigorous, systematic investigations about extremely consequential life questions.

In reality, categories of children are not so discrete, Boyce acknowledges; many of us are likely to be a mix of orchid and dandelion. He writes that because of children’s developmental plasticity, all of them are orchids at some level, and we should be concerned about the rising societal adversities they are facing today, like income inequality, violence, and maltreatment. Children are the keepers of our collective future, he says, and “may heaven help us” if we fail the most sensitive among them.