Researcher Dante Dixson grew up with a strong sense of hope in life, largely due to the messages he received from his mother about problem-solving and working hard. Although none of his parents or grandparents went to college, there was never any doubt whether he would go. 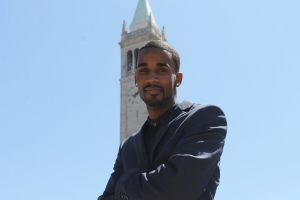 Dante Dixson, Ph.D., is the principal investigator of The Hope Laboratory.

But as his research shows, young people from marginalized groups don’t always receive these hopeful messages today. Against a backdrop of political strife and tense race relations in the U.S., they may rarely hear positive expectations from teachers or see role models in the media who look like them.

As a result, it can be difficult to envision a bright future—or any future at all, which was the case for one 16 year old who told Dixson he didn’t expect to live past 18, in the same casual way one would say, “I’m going to buy some ice cream.”

Dixson is an assistant professor of educational psychology at Wayne State University—soon to be at Michigan State University—and the principal investigator of The Hope Laboratory, looking at how hope influences students’ expectations for their lives, particularly minority students’. He and others have found that hope, or having something to look forward to and tangibly work toward, is associated with better engagement and curiosity in the classroom, higher academic achievement, greater happiness, and a lower risk of death. Dixson’s work helps educators, teachers, and psychologists understand how imagination and hope can propel students toward goals and outcomes that may have seemed out of reach.

In the interview below, I talk with Dixson about how hope (or the lack thereof) can influence students’ lives, the impact of racial and class-based disparities in education, and what we can do to bring more hope to all.

Jenara Nerenberg: Hope seems like such an intangible concept. How do we actually help young people cultivate a stronger sense of hope?

Dante Dixson: Right now and over the last year, I’ve been implementing and developing an intervention in the suburbs of Detroit that lasts 90 minutes or less.

The whole point of the intervention is to get students to think more is possible and to get students to think that what is possible is actually easier to get to than expected. I show pictures to students of people who we don’t generally expect to be successful, along with fake low GPAs. They share reactions like, “Oh, they’re probably in jail.” Then I show pictures of them in their real lives—one is a cardiac surgeon, one is in the NFL, the other has a startup with multimillion-dollar revenue. And I ask the students how they think they got from point A to point B.

One person said, “They went to church and prayed for hours and hours and hours.” And I tell them, well, actually they took something like the “hard work pledge,” which is what I ask my students to take: that they will show up to class and do what the teacher says no matter what, do all the work assigned to them to the best of their ability, and actively try to succeed the best they can for six weeks. These all relate to higher success rates in school.

JN: How does your intervention help students with goal setting?

And then I have the students come up with what the highest impediment might be to accomplishing one of those subgoals. So if a subgoal was to get an A on the science project, then the highest impediment would be not coming up with a good project idea or perhaps a distraction. Then I ask the students to come up with how they might overcome those impediments. Research [suggests that] if you’re able to imagine the obstacles, students are more likely to overcome them.

I have them close their eyes and go through a hope-visualization exercise, using as many senses as they can. I guide them as they imagine themselves going through their day, waking up and going to school, day after day, then imagining that subgoal—see it in the distance and then imagine that impediment coming up. Perhaps a cell phone disrupts the studying, and then I ask them to imagine what they would do in that situation. Then I ask them to imagine how their friends and family might feel seeing them accomplishing the subgoals. Then I ask them again to sense and imagine the ramification of accomplishing the stretch goal.

The goal is to get students to believe that what they want to do in life is just a huge but extremely manageable step away. I may not be able to envision becoming a medical doctor at Harvard, but I can show up for class! I can do my homework for six weeks! I can do what the teacher says for six weeks!

JN: Why is hope particularly important for young people from disadvantaged groups?

DD: I think that hope, in particular, is a great avenue for minority and disadvantaged youth because it gets the student to think outside of the typical outcomes. Students can’t envision themselves doing these [great] things because no one around them is doing it. But if you can get students to hope beyond what is typical of those around them—see it, feel it, sense it—then that gets them to take action and to strive beyond what those around them are striving for.

“If you can get students to hope beyond what is typical of those around them—see it, feel it, sense it—then that gets them to take action”

With our current political climate banning various groups or making it harder for certain groups to come to the United States and see themselves as American, all of this affects their level of hope. If I were Hispanic and hearing people say that people who look like me don’t belong here and that walls are going up to keep people like me out, that’s going to hinder my ability to be hopeful within my day-to-day life.

JN: Part of your work is around gifted education. Can you talk more about the experiences of students of color in this context?

DD: Take, for example, a young African American boy who sees the highest achievers who look like him. What does he see? He sees athletes, primarily. Or entertainers. Some studies found that African Americans are several times more likely to be portrayed in media as thieves, burglars, in jail, or some other negative portrayal as compared to European Americans, who are many times more likely to be portrayed as doctors and lawyers and other highly educated people.

I think that when you’re a young African American boy and you’re constantly seeing African Americans being portrayed as in jail, dead, or as an athlete or entertainer, that limits what you believe is possible. So the question then becomes, “What makes me special? So that I can rise above that and be the odd man out.”

But even when one does have the ability—like for an AP class or a gifted program—many of them don’t want to be there, because there is this sense of being alone and not belonging there.

I read a book chapter once that said a child is five times more likely to be in a gifted program if they are of high socioeconomic status (SES) versus low SES. Teachers are much less likely to identify minority and disadvantaged students to enter gifted programs. Wealthy people can generally go and get a private assessment that demonstrates the child’s gifted abilities, and additionally they can pay for the high cost of gifted programs.

So when you take all of that into account, there’s just this conglomerate of factors that are all working against minority and disadvantaged students to live up to their highest potential. So it all comes together where students are not seeing themselves or envisioning themselves there. And even if they can see themselves there, they don’t have this sense of agency of “I can make it there.”

JN: So how can people have more hope in this climate? How do we push back against societal messages?

DD: The way that we fight that is by holding up marginalized groups. For instance, if the political message is that young Hispanic students don’t belong here, then highlighting their accomplishments, spotlighting them, focusing on their contributions to American society. What that does is give people a different view to see past the barriers being put around them.

JN: How does police violence and the lack of hopeful media representation impact young African American men, and how would you suggest community leaders go about generating more hope?

DD: If I saw a young African American getting shot by the police, that would hinder my hope in that I would think that people like me are always going to be marginalized and the system is always going to try to encroach upon me trying to live up to my abilities. What that might do is make me reach for goals that are not as high and then believe that I can’t accomplish the goals that I would if I felt like I didn’t have any restrictions.

What young African American men can do themselves is try to understand that these events are not representative of all situations. If I took a group of young African Americans to a historically black college or university where people look like them and came from backgrounds like they did and are now accomplishing things we don’t see in the media and TV, then that would facilitate their belief in their ability that they can accomplish the things the media says they can’t.

Is racism real? Unmistakably. It’s real and powerful and a very big barrier to minority youth. But at the same time, one of racism’s biggest ways of hindering hope is it makes people think that they can’t accomplish a lot. And the way we challenge that is by African Americans actually thinking they can accomplish more and that if they do the best they can do and try to accomplish as much as they can—even if racism is real—they’ll get a whole lot further than if they didn’t try in the first place.

A question I often ask is, “What would you do if you knew you could not fail? What would you try to be if you knew you could not fail?” Then I try to get them to answer that question by facilitating as many steps along that path as possible—for example, I might introduce them to doctor friends of mine if they say they want to be a medical doctor or take them to a medical school. One time, I had someone come to a grad school class with me so that he would see that we’re not solving differential equations in that class and that it’s not as hard as people think it is.

So it’s basically lifting the veil on these things that the students just aren’t exposed to and letting them know they can accomplish these things just as much as anybody else can.