Empathy has become a buzzword these days. You hear it being used in classrooms, hospitals, and even corporate boardrooms. When the president talks of empathy in his address to the nation—as he has on several occasions—you know the word has reached some kind of cultural zeitgeist 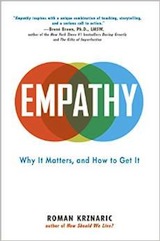 But what is empathy, really? And why should we care about it or try to enhance it?

In his new book, Empathy: Why It Matters and How to Get It, philosopher Roman Krznaric explains what empathy is and what it isn’t, and gives a powerful argument for the importance of cultivating empathy in ourselves. Though empathy may have “a reputation as a fuzzy, feel good emotion,” he writes, it “is, in fact, an ideal that has the power both to transform our lives and to bring about fundamental social change.”

Science has shown us that we are wired for empathy—that we literally have brain circuits devoted to trying to understand how another person is feeling and to “feel with” them. But those circuits don’t always come online without some kind of prodding. And they can also go offline under certain circumstances, such as when we are stressed or rushed.

Krznaric identifies four common political and social barriers to empathy: prejudice, authority, distance, and denial. Seeing others through the lens of prejudice will make it easier to deny our shared humanity and harder to empathize. If someone in authority encourages you to discount a group of people—i.e. calling immigrants “illegal” for political purposes—it’s harder to develop empathy for those people. Proximity—both geographically and experientially—makes it easier to empathize, while distance from the suffering of others can breed indifference. That’s perhaps why the Internet can swing both ways—sometimes decreasing empathy by distancing us physically from others (which can lead to superficial friendships or, worse, bullying), and sometimes increasing empathy by bringing us into contact with those who would otherwise be unreachable, such as victims of distant wars.

To overcome these barriers, Krznaric suggests that we consciously try to humanize other people in our minds, even those who are our enemies. Taking time to understand those who are different than us can broaden our worldview and help cultivate empathy. And, though the Golden Rule—do unto others as you would wish them to do unto you—may have its virtues, Krznaric argues that its precept has limited utility when it comes to intergroup contact.

“While it [the Golden Rule] may work admirably well when our emotional lives and experiences coincide with other people’s—especially through a recognition of shared suffering—what happens when others’ experiences, culture and world views are very different form our own? Here the Golden Rule in not enough,” he writes. Instead, he argues, we should practice the “Platinum Rule”: Do unto others as they would want you to do unto them.

Much of the book is devoted to outlining ways to increase one’s empathy through the habits of highly empathic people. Krznaric suggests immersing oneself in another culture through travel, or experimenting with living with less money or food as a path to appreciating what life is like from someone else’s vantage point. Joining a choir or another group activity, where people from different walks of life come together to work on a shared, cooperative task, is another good way to build empathy. These kinds of intense exposures to difference can help decrease prejudice—one of the blocks to empathy.

He also suggests initiating conversations with people who don’t necessarily share your interests and viewpoints—people from different political groups or religious persuasions, for example—and trying to engage strangers on the street. Even using more probing, thought-provoking questions in everyday conversations can deepen engagement and build empathy for others. And, when face-to-face interactions aren’t possible, books, photographs, movies, and other art forms that help you imagine the interior lives of other people are good alternatives. Whenever we can challenge our preconceived notions about others, we are helping to build empathy muscles, says Krznaric.

“Proving ourselves wrong is one of the fastest forms of empathic education,” he writes.

While many of his suggestions are innovative—I particularly liked the suggestion of a virtual empathy library where people can get recommendations for books that inspire empathy—most are not scientifically proven to be effective…or, if they have been, he doesn’t mention the science. In fact, the suggestions are often presented as insights from his personal experience or as de facto good for us—a perplexing stance for someone promoting the value of embracing different viewpoints.

Meanwhile, he occasionally critiques the work of scientists who’ve studied empathy and compassion—for example, questioning the benefits of self-compassion promoted by Kristin Neff—or downplays the pitfalls people may face when trying to build empathy for others. In one case, he writes, “Empathy overarousal is a serious problem, but we should remember that it affects only a minority of people,” as if it were not an important factor to consider.

Still, I thoroughly enjoyed the book—as much for its inspirational stories of super-empathizers, as for its creative ideas on increasing empathy in everyday life. We would all do well to expand our circle of empathy and to build upon our sense of common humanity in order to take action to improve society. Just think of what members of Congress could do if they only knew how to reach out across their empathy divide! Perhaps if we (and they) followed just some of Krznaric’s suggestions we’d all be on the path to a more peaceful co-existence.