Internet searches are a fascinating window into human nature and social trends. By analyzing Google searches, researchers have uncovered racial bias in elections and our most intimate sexual desires, as well as many, many consumer trends.

But recently, I discovered another kind of search trend: rising interest in “pro-social” emotions and behaviors like love, empathy, and gratitude. Meanwhile, worldwide searches for negative emotions and behaviors, like hate or revenge, have stayed flat, and even, in some cases, declined. You can check my numbers and find out more about how they’re calculated by using a very handy tool called Google Trends, which shows the search volume (the top two thirds of the graphs embedded in this article) and also how frequently the topics pop up in Google News stories (which you can see in the lower thirds).

The top line represents the "happiness" search volume index, 2004-2012. The bottom line shows how frequently "happiness" has turned up in Google News stories during the same period.

Let’s start with the king of positive emotions, “happiness,” and its queen, “love.” Since Google’s inception, searches for happiness have roughly tripled (at left) while searches for its opposites, like sadness or melancholy, have remained fairly steady.

No one seems to know exactly what’s going on here. When I asked Google’s “Chief Happiness Officer,” Chade-Meng Tan, about this trend, he merely replied, “I have no insights or comments on this data point.” If the man responsible for happiness at Google doesn’t have them, I’m not sure who could; I also talked to positive psychologists who simply shrugged their shoulders. And I wasn’t able to find any empirical studies that might explain the trend (though if any readers can point me to one, that would be welcomed).

But I think we have solid grounds for speculation: The market demand for human goodness is growing. More and more people are actively trying to figure out how to be happier and more connected to other human beings. It’s true that few people outside of university creative writing programs are striving to be sad. But these numbers tell me that, at the very least, people want what we at the  Greater Good Science Center are offering: tools for living a life that is more compassionate, grateful, and resilient.

Take “gratitude,” for example. We recently launched our Expanding the Science and Practice of Gratitude project with $5.9 million in funding from the John Templeton Foundation.

According to Google, we’re on the right track: More and more people on the Internet are searching for gratitude. (Google Trends reveals other fun facts, some of which are impossibly cryptic: The people of the Philippines are the most curious about gratitude, but the city of Pleasanton, CA is searching harder and more often for it than any other city in the world.)

What about the opposite of gratitude, “entitlement”? This has been the subject of much handwringing by people who worry that our children are feeling more entitled than ever. But they can take heart: The same number of people are searching for it in 2012 as searched for it in 2004. 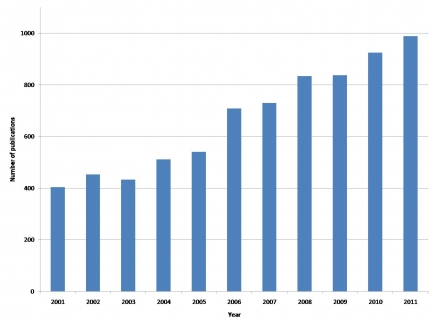 The same search trend applies to “forgiveness,” “empathy,” and “mindfulness”—the average search volume for each rises every single year, while searches for their opposites—e.g., revenge—are static. (There are curious exceptions to this positive behavior search trend; “altruism” and “compassion” have both stayed flat, for example.)

It’s nice to know that people are searching for forgiveness and empathy on the World Wide Web. But that generalized curiosity is reflected in another, more rarified trend, this one in the rising number of scientific papers on positive and prosocial emotions and behaviors—see graph above.

As we noted in the very first issue of our print magazine, for decades most scientific activity was dedicated to discovering what was “dysfunctional about human behavior and relationships.” Only in recent years have researchers turned their attention to why we love, how we care, and when we cooperate.

In the last line of his short story, “What We Talk About When We Talk About Love,” Raymond Carver refers to the “human noise” of hearts beating in a room together. The Internet has also been referred to as a form of “noise,” and yet, just as in Carver’s classic story, the noise isn’t all bad. There’s some good to be found there as well.

Love is universal. People’s emotions are one and the same. Its only that they are separated by borders and politicians who manipulate it for personal reasons.

In this age, guns might win a battle, but love wins the war!

I LOVED the analytics showing the increase in searches for “Gratitude” and other positive emotions. It lets me know I am on the right track!

While your upbeat conclusion that Google Trends provides a window into our collective soul is well-taken, it needs to be tempered with a little dose of reality about why those searches are taking place.

For example, the popularity of the search term, “gratitude” no doubt has a lot to do with Rhonda Byrne’s notorious bestseller, The Secret, which emphasized the importance of an “attitude of gratitude” in “manifesting” one’s desires. Many other e-books have attempted to ride Byrne’s coattails, and most of those are being promoted by affiliate marketers who engage in extensive keyword research. And the Philippines has become the “go-to” place for ultra-cheap outsourcing of the many humdrum activities that internet marketers use to make their web properties rank better in the search engines, such as article marketing and backlinking through blog comments. All of this results in Google searches by people who might not give a hoot about gratitude per se.

Now, having said that, it would be fair to retort that the marketers wouldn’t be making this effort if people weren’t interested in buying their products. But what do we expect marketers to attempt to sell (other than porn), and how are they going to sell it? Since sex sells, it stands to reason that other “positives” will sell a lot better than misery and agony. Some of the search activity we are seeing from genuine web users, as opposed to marketers, is artificially stoked up for commercial reasons. The searches for “gratitude” are a classic example of this. At the risk of being excessively cynical, many of those searchers are only using gratitude as a tool to a self-interested end, and wouldn’t be searching for it if the profit-seeking publishers hadn’t led them down that path.

Finally, we should not discuss this subject without making at least a passing mention of the disturbing fact that Google knows far too much about us. If you don’t want Google to know what you’re searching for, use DuckDuckGo, a search engine that does not track your activity.