When mothers try to describe the love they feel for their newborn chil­dren, the words “bilateral activation of the orbito­frontal cortex” probably won’t come to mind. But that type of brain activity might be a neurological basis of their maternal affections, according to a new study.

The study, conducted by researchers at the University of Wisconsin and published in the February issue of the journal NeuroIm­age, involved six mothers with newborn infants. The mothers viewed photos of their babies—interspersed with photos of other babies, as well as photos of familiar and unfamiliar adults—while lying inside a functional magnetic resonance imaging (fMRI) scanner. The functional MRI study recorded images of the women’s brain activ­ity while they looked at the photos. Upon seeing them, the women reported how each type of photo made them feel. 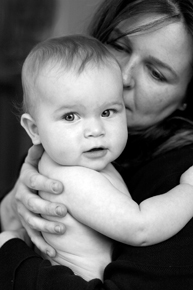 When the women looked at photos of their own babies, their brain images showed unusually strong activity in the orbito­frontal cortex (OFC), and they reported feel­ing happier and more loving at these times—strongly suggesting a link between the OFC and their positive emotions. Their OFC activity was weaker when they saw other babies and adults.

Lead researcher Jack Nitschke said the results expand scientists’ understanding of the relationship between positive emo­tions and brain activity, especially with regard to the OFC. “What this study shows is that when you’re feeling this type of positive emotion, this is an area that essentially swamps other areas of the brain,” he said.

Nitschke also said that the study could help scientists better understand and treat postpartum depression, the type of depres­sion some mothers experience after giving birth. He said that in a follow-up study, he would like to explore whether women showing symptoms of postpartum depression actually exhibit less OFC brain activity than other women. If so, that could mean their depression arises not from overwhelming negative emotions, but rather from deficient levels of positive emotion. Their therapy would then focus on boosting positive stimuli in their lives, not only alleviating sources of stress.