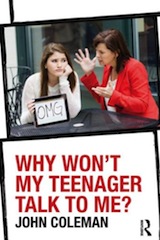 It’s hard to talk to a teen. I know. I have two teen boys. I like to joke about being like a mosquito buzzing in their ear—they know I’m there, but they wish I’d go away.

According to John Coleman, a British psychologist and renowned youth advocate, I am not alone.

His new book, Why Won’t My Teenager Talk to Me?, explains the many reasons teenagers tend to shut down around their parents and talk more to friends…even though they especially need parental connection and support as they move toward greater autonomy and independence.

Coleman’s book is full of useful information about teen development. He outlines a positive model for parental care of teens with the acronym “STAGE,” which stands for:

Though it may seem as if teens avoid talking to their parents out of spite, in many instances they want to shield their parents from worry, or they fear a parent’s negative response. But many teens will talk, if given the right circumstances, according to Coleman, and he gives numerous tips for parents who want their kids to open up to them:

These basic tips can go a long way toward helping parents communicate better with their teens. But Coleman also gives guidance for how parents can navigate through more worrisome concerns, like teen sexual activity, drug use, Internet addiction, or eating disorders. He offers tips for assessing what’s going on when a teen isn’t talking—and advice for knowing when and how to intervene.

His guidelines are straightforward, balanced, and research-based. For those who want simple advice about how to understand and talk to teens, this book could be for you.