Like many other parents of teens, I worry my kids are too willing to follow the crowd, instead of using their own better judgment. 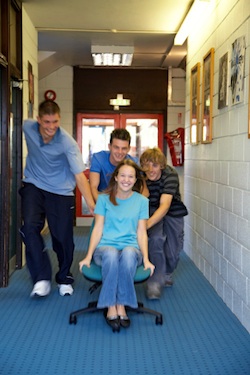 But a new longitudinal study in Psychological Science should give me—and other teen parents—pause. It suggests that teens who have close friendships and are more focused on following their peer group grow up to be healthier than peers who are loners, or who only pursue self-interest.

Researchers asked close peers of 13 year old participants to assess the quality of their friendship and the degree to which participants demonstrated “allocentrism”—the tendency to place the desires of one’s peers ahead of one’s own goals.

Later, when participants reached the ages of 25-27, the researchers assessed their overall health. Comparing their teen to their twentysomething selves revealed that higher-quality friendships and higher levels of allocentrism independently predicted better overall physical health at later ages. Even when taking into account other potential contributors to health outcomes—like adult drug use and emotional stability—friendship quality and allocentrism in one’s early teens predicted health in one’s mid-20’s better than the combined effect of one’s body mass index or prior history of serious illness.

This surprised the lead author of the study, Joseph Allen, who is also the principal investigator at the University of Virginia’s Adolescent Research Group.

Though finding that allocentrism makes you healthier than being independent may seem counterintuitive to our American way of thinking—we Americans tend to value individuality and going your own way—Allen speculates that allocentrism probably helps decrease chronic stress. According to Allen, evolutionary forces have shaped us to engage with others in ways that will minimize the chances of being ejected from our peer groups—and being more of a follower probably helps decrease social tensions to keep us within our “tribes.”

“If you look in the animal world, the leader of the pack—in gorillas or chimpanzees, for example—gets lots of resources; but it’s a very high-stress position,” says Allen. “From that perspective, we’re really pack animals, where it’s safest to be with the pack. It’s intrinsically stressful to be off on one’s own.”

However, that doesn’t necessarily mean that allocentrism is better than not following the pack, says Allen. In other studies, he and his colleagues have found many benefits to autonomy, including better educational and economic outcomes. He points to the fact that Americans lead the world in patent applications, suggesting that our autonomous cultures may augment creativity and innovation.

Still, research finds that more communal-oriented cultures look healthier than more autonomous ones, even when you account for economic and physical factors, he says. This suggests that the answer to the question of allocentrism versus autonomy is not definitive.

“Our research doesn’t say that being a follower or a leader is all good or all bad; it’s saying that there are costs and advantages to both,” says Allen.

Allen believes that what parents should take away from his body of research is that their teens are engaged in a balancing act. Just like adults, they are trying to find the right mix of autonomy and inclusion. He thinks that it’s probably misguided for parents to suggest to their teens that they not conform to peer expectations—after all, he says, even adults are prone to this. Think of the male lawyer who wears the uniform of a dark suit, white shirt, and tie, he says.

“That desire to be like other people and look the part, that’s a built-in human desire,” says Allen. “We kind of pillory adolescents a bit unfairly for being overly focused on peers, not recognizing that as humans we need to get along and fit in, in order to get by.”

Of course, studies like this one are not the last word on friendship. It’s still important for parents to consider the needs of their own introverted child or the potential negative impacts of following one’s peers, especially if they are involved in problem behaviors, like promiscuity or alcohol abuse.

But, given the potential impact on future health, Allen proposes that pediatricians should perhaps be checking more closely on the health of their patients’ peer relationships, as part of a general check-up.

“Our research would suggest that social relationships are another risk that people should know about,” says Allen. “The kid who is a loner, who doesn’t have friends, who’s not connected with anyone, may be at risk.”

So, perhaps we parents should not necessarily worry about how relationship-focused our teens act after all. They may simply be doing the very work they need to do to have happier, healthier, and more socially connected lives.