Teens take risks. Some will do drugs, drink to excess, shoplift, and worse—activities that studies show are associated with problems later in life, including depression and anxiety.

But risk-taking is part of growing up, too, helping teens to develop independence and identities—to start becoming adults. Risks help them to find out what they can do, and to gain insight into the meaning of their lives.

So, if risk-taking can be both bad and good, how can parents and other adults encourage positive risks, while discouraging more negative ones?

That’s the question at the heart of new studies by Eva Telzer, a neuroscientist at the University of Illinois, Urbana-Champaign. She’s been looking at how the brain responds to risk-taking and how that shapes depression in adolescents—with some surprising results.

Instead of finding a clear relationship between thrill-seeking and depression, as other scientists have found, Telzer’s research finds a much more complicated interaction. Her studies show that teens who find pleasure in giving to others may be protected from developing depression, even if they are attracted to risk-taking. 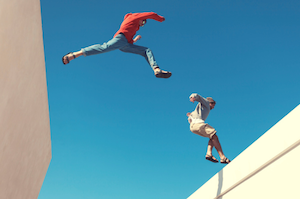 Neuroscientists have long understood that the dopamine circuit in our brain lights up in response to enjoyable activities. If we like how something makes us feel, we are bound to end up repeating it, sometimes addictively. In particular, a part of this circuit called the ventral striatum has been implicated in negative risk-taking behaviors like addictions or thrill-seeking. During the teen years, this area of the brain is particularly sensitive, which may help to explain why teens tend to feel more pleasurable highs when engaging in these behaviors.

But Telzer’s research is helping to show that the ventral striatum lights up for other reasons, too, and therein lies the key to understanding negative and positive risks in the teen brain.

In one study, she and her colleagues measured neural activity in the brains of adolescents in response to different kinds of rewarding activities and then looked at how their levels of depressive symptoms changed in the course of a year. In the study, teens were given opportunities to donate money to family members and to keep money for themselves while being hooked up to an fMRI machine. Additionally, they were given a task where they had to make risky, uncertain decisions to gain monetary rewards for themselves, mimicking the kinds of decisions teens sometimes face in real life. Depression symptoms were measured prior to the experiment, and again one year later.

Analyses showed that adolescents whose ventral striatum lit up most when giving money to themselves or when taking a risk for a personal reward had the greatest risk of depression a year later, similar to what other studies have found with ventral striatum activation.

However, those kids whose ventral striatum lit up when choosing to give to their families did not have increased depression symptoms a year later; in fact, their symptoms went down over time.

“The most surprising thing to us was that this one region of the brain that has been pretty consistently linked to negative outcomes in adolescents can also be associated with positive outcomes,” she says. “In the much more positive context of prosocial behavior, this kind of activation was predictive of positive outcomes, like declines in depression.”

In addition, those who found pleasure in giving to others and in risk-taking still had their symptoms decrease. In other words, getting pleasure from risk-taking doesn’t necessarily lead to depression. Telzer believes that, by giving teens opportunities to engage in meaningful activities, we may be able to take advantage of their neural sensitivity in more positive ways while giving them a mental health boost.

“The heightened reward sensitivity in teens has been mostly studied in a negative context,” she says. “If we can find the types of contexts where this is adaptive rather than negative—like prosocial behavior, academic engagement, or different types of hobbies—they’re going to find pleasure from that behavior and it’s going to be protective against things like depression.”

Telzer doesn’t think that the quality of the parental relationship affected her results in this study, even though the intervention involved helping out family members. Although having positive family relationships may increase the amount of positive feelings one gets from helping one’s family—indeed, another study of hers confirms this impact—it doesn’t change the effect of giving on decreasing depression.

“Even when we controlled for how close and supportive your family was, we still see this really strong link,” she says. “So, there’s something beyond feeling close to your family involved here.”

Though we might be tempted to interpret her results as proof that we should assign prosocial activities to teens, Telzer does not. Yes, some kids may feel good about giving, and that’s protective, she says; but they can’t necessarily control the way their brains respond.

“I don’t think we should push teens to add prosocial activities to their lives, because teens who show the least amount of ventral striatum activity during the prosocial task are actually showing increases in depression,” she says.

Instead, she believes that her work suggests that we steer teens toward what they find meaningful—which may involve helping out family, but could also include academic work, after-school activities, leadership opportunities, or artistic endeavors.

She points to the work of Reed Larson, who studies teen leadership roles and mentoring in after-school programs, and others who look at positive peer influences or the role of family ties on teen behavior. All of these hold promise for helping teens stay away from negative risk-taking.

“I’m personally excited and hope other researchers as well will start to test more the context in which reward sensitivity can be positive and negative,” she says. “We need to create the context where teens can explore their world and engage in risky behavior that won’t put them at risk for getting hurt or for death. Then risk-taking can be helpful.”