It seems like mindfulness is part of the zeitgeist these days. Everyone from school children to athletes to corporate CEO’s are learning to practice mindfulness and reaping its rewards—decreased stress, increased focus and productivity, and improved interpersonal relationships, to name a few. And, as the scientific evidence supporting the benefits of mindfulness continues to mount, it’s bound to become even more ubiquitous in the coming decades. 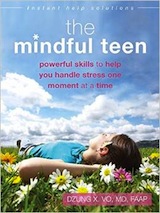 But while mindfulness programs and books have proliferated in recent years, there is still a need to reach those who stand to benefit most from mindfulness practices: teenagers. By almost any definition, adolescents suffer more than other groups from the kinds of problems that mindfulness is purported to help alleviate: emotionality, stress, lack of focus, and interpersonal conflicts.

That’s why I was happy to see a newly published mindfulness book aimed at teens: Dzung Vo’s The Mindful Teen: Powerful Skills to Help You Handle Stress One Moment at a Time. Vo, a pediatrician who runs workshops for teens called Mindful Awareness and Resilience Skills for Adolescents, has written a book that is simple, straightforward, and bound to appeal to teenagers.

Vo has found that many adults assume teens don’t have the interest or the attention span to practice mindfulness. But, through years of leading his workshops, Vo has learned that many teens, despite expectations, are willing to try mindfulness and often see amazing results.

“The teens I have worked with have proven to me that they really ‘get it,’ even more than many adults,” he writes.

Adolescence can be pretty darn stressful, full of academic, social, and emotional challenges. Vo presents scenarios based on teen realities, many gleaned from his practice, to help his audience understand how mindfulness can make a real difference in their lives. For example, he explains how mindful breathing can help you stay calm before a test, how becoming more aware of automatic thoughts can help you avoid misinterpreting social situations (and saying something you might later regret), and how showing more compassion for yourself, instead of constant criticism, can help you overcome obstacles.

The book outlines a variety of mindfulness practices—both formal practices, like breathing meditations or body scans, and more informal practices, like paying attention when you walk to school or purposefully focusing on doing one task at a time. In this way, teens are invited to choose practices that they can manage in their busy lives or that appeal most to them. As any practice can be beneficial, Vo seems content with introducing different ones and letting teens choose for themselves.

As an adult, it’s hard for me to judge whether Vo succeeds in reaching his teen audience; so I asked my own teenage son to read the book, try the exercises, and give me his opinion of it. After doing so, my son told me that he thought the book would be helpful for teens that have a lot of stress in their lives, and that it was easy to follow and generally appealing. Interestingly, though, it did not convince him to go out and start up a mindfulness practice, much as I might have liked.

However, he did seem taken by the part of the book focused on “sleep hygiene”—how to prepare oneself for a better night’s sleep. He learned that removing electronic devices from your bedroom and engaging in more low-key activities, such as reading a book, prior to going to bed is very helpful for falling asleep easily. This rang a bell for him (no pun intended), more so than many of the other practices outlined in the book.

In fact, many of mindfulness practices weren’t necessarily easy even if they were simple to do. While the breathing meditation was “calming and peaceful,” according to my son, he also found his mind wandering a lot when he tried it out. This is likely a common complaint for new practitioners, and ongoing practice would certainly make that easier to handle. But, without the support of a teacher or a group of fellow teens, I imagine it would be hard for any teen to keep up with the practices—especially a teen that is highly peer-focused.

Also, if you’re a teen who’s interested in the research on mindfulness, you won’t find it here. This is strictly a “how-to” book, designed for someone who wants to test the waters. I asked my son if he missed having the research, and he said that he didn’t; but, as a parent, I might have appreciated knowing some of the research backing up these methods.

Still, I’m happy that my son was at least willing to read the book—a sign that the book meets its goal of appealing to teens. And, at least he got an introduction to these concepts, as he is likely to hear more about mindfulness and its benefits over time. As a parent, I’ve learned that sometimes all you can do is to plant the seed and hope that it will take root later. Luckily, having started my own mindfulness practice has helped make it easier to accept that reality.