My young adult daughter recently phoned me, clearly upset. She was mentoring a 17-year old boy through his college applications and had shown him her own application essays by way of example. But when she saw his early draft, she realized that he had directly lifted portions of her essays—a discovery that left her feeling betrayed, angry, and, frankly, puzzled. 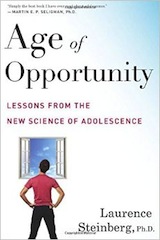 “Why did he do it?” she asked me. “He’s smarter than that. If he’s caught plagiarizing, all his offers could be rescinded.”

She was unsatisfied. “No, really,” I added, “He literally wasn’t thinking.”

“Adolescence,” Laurence Steinberg argues in his powerful new book, Age of Opportunity, “is not a deficiency, a disease, or a disability, but it is a stage of life when people are less mature than they will be when they are adults.”  To condemn a teen for being a teen is like criticizing an infant for not being able to walk.

The last 15 years of research has conclusively shown that the brain undergoes “substantial and systematic” changes between puberty and the early twenties. Policy-makers, educators, and parents need to take those changes into account, Steinberg says, because our current approaches are leaving teens at the bottom of the misery index. And since he is a giant in the field of adolescent development, he has sound suggestions for exactly what needs to be done.

What happens to the brain during the teen years? First, hormonal changes start to remodel some of the brain’s major systems. For example, the brain’s limbic system—the “feelings” circuitry—becomes more powerful and pervasive, which makes teens feel amped up a lot of the time. They become super-sensitive to social dynamics and are more emotionally raw: more excitable, more labile, and quicker to anger.

Unfortunately the brain system that could put those spiky feelings in check—the self-regulatory system of the frontal cortex—is slower to develop. And it’s this gap, between excitability and self-monitoring, that makes for a group of people who are like cars with hyper-sensitive gas pedals but poor brakes.

Teens perform just as well as adults on tests of logic, but can behave “stupidly” and make bad choices because excitability easily overwhelms them. My daughter’s young protégé is a great student, but, probably under stress, acted out of character.

Steinberg humbly admits his own bad choices in his teen years, arguing that adults can and should protect teens from themselves while this imbalance is in full force. In this case, I urged my daughter not to shame the young man but to make it a learning moment—calling it out, explaining the seriousness, and lending him some confidence to find his own inspiration—and to follow up with his father, who I knew would respond constructively.

Second, adolescence is a period of great neurological plasticity or malleability. In the first six months of life, the neurons in an infant’s brain connect at the rate of about a hundred thousand per second. As children grow, it’s not possible for every neuron to connect with every other neuron (or we’d need heads the size of Manhattan, Steinberg says). So in adolescence the connections among neurons get reorganized for efficiency: Unused synaptic connections are pruned, and the remaining ones organize according to use. This, Steinberg says, is “how the outside world gets inside of us and changes us.”

If teens’ circumstances are favorable and supportive to their development, teens will thrive; but their development can be uniquely undermined if the environment is harmful. Concussions, trauma, drugs, and chronic stress all have different effects in adolescence than later in adulthood. For example, if a teen is repeatedly traumatized during the time that the prefrontal cortex—the part of the brain responsible for self-regulation—is developing, it may interfere with her ability to develop self-control. In fact, adolescence is an especially sensitive period for the establishment of mental health, in general.

The conditions in which adolescents develop are vitally important, and on that score Steinberg’s frustration is palpable.

American teens are miserable, he says. They fare poorly in almost every measure compared to teens in other developed countries, even though the biological and neurological processes of development in adolescence are the same the world over. For example, they trail teens from other countries on many aspects of achievement, but are “world leaders in violence, unwanted pregnancy, STDs, abortion, binge drinking, marijuana use, obesity, and unhappiness.” And their mental health is deteriorating—five times worse than 75 years ago, according to one study—with twenty percent of high school boys on prescription medication for ADHD, even though the actual number of diagnoses is half that.

“Many experts believe,” Steinberg writes, “that adolescents are being medicated so that they are easier to manage at home and in school.”

America’s approach to raising adolescents, he says, is a mix of “misunderstanding, uncertainty, and contradiction.” Twelve-year-olds can be tried as adults but twenty-year olds can’t buy alcohol; 16-year olds can drive (car accidents are the leading cause of death for teens) but are prohibited from R-rated movies. Disappointingly, he does not explain what other cultures do so much better for their teenagers. But his prescriptions for America are based on the largest, most robust and conclusive bodies of evidence in the field.

American high schools, he says, are boring to teenagers and so they disengage quickly, turning instead to their peer culture and dropping out in high numbers. The answer is not, he says, to spend more money or create more demanding courses, but to teach students the determination, perseverance, and self-control to slog through educational requirements that eventually have big payoffs. His view is based on his landmark study of achievement in 20,000 high students that showed that Asian-American students, more than any other ethnic group, had the “mindset” that hard work paid off, and their stick-to-itiveness was predictive of their success.

Other studies concur, according to Steinberg: “People who score high on measures of self-regulation complete more years of school, earn more money and have higher-status jobs, and are more likely to stay happily married,” he writes. “People who score low on these measures are more likely to get into trouble with the law and to suffer from a range of medical and psychological problems, including heart disease, obesity, depression, anxiety, and substance abuse.”

Schools, he says, should be explicitly teaching these skills along with other social and emotional skills.

For parents, he recommends an authoritative style of parenting, one that combines loving warmth, developmentally appropriate limits, positive expectations, and the support to meet those expectations. Authoritative parenting—as opposed to permissive on the one hand, or authoritarian on the other—leads to teens who are poised and confident, and more determined, self-reliant, and positive. They do better in school and have better mental health. They are less susceptible to peer pressure, substance use, and even minor offenses like cheating.

Steinberg argues that social policies should align with actual developmental reality, and he has already been influential in making this happen. Driving laws for teens have become more graduated in many states because of his research, which showed that teens have more accidents if peers are in the passenger seat. He was the lead scientist in the Supreme Court case that abolished the death penalty for juveniles, and his testimony has been key to overturning life-without-parole sentencing for teens in several states.

The media often blames teens or their parents when things go wrong. But the modern, and dominant, view of developmental scientists like Steinberg is that the degree to which parents can successfully parent their children is highly dependent on how well their social environment—education, policy, media, culture, the economy—align to support children’s development.

And in this regard, Steinberg’s message is clear: Anyone working with teens should know the science and adjust their behavior and policies accordingly. His book is a great place to start.