For centuries, gossip has been dismissed as salacious, idle chatter that can damage reputations and erode trust. But a new study from the University of California, Berkeley, suggests rumor-mongering can have positive outcomes such as helping us police bad behavior, prevent exploitation and lower stress.

“Gossip gets a bad rap, but we’re finding evidence that it plays a critical role in the maintenance of social order,” said UC Berkeley social psychologist Robb Willer, a coauthor of the study published in this month’s online issue of the Journal of Personality and Social Psychology.

The study also found that gossip can be therapeutic. Volunteers’ heart rates increased when they witnessed someone behaving badly, but this increase was tempered when they were able to pass on the information to alert others.

“Spreading information about the person whom they had seen behave badly tended to make people feel better, quieting the frustration that drove their gossip,” Willer said.

So strong is the urge to warn others about unsavory characters that participants in the UC Berkeley study sacrificed money to send a “gossip note” to warn those about to play against cheaters in economic trust games. Overall, the findings indicate that people need not feel bad about revealing the vices of others, especially if it helps save someone from exploitation, the researchers said. 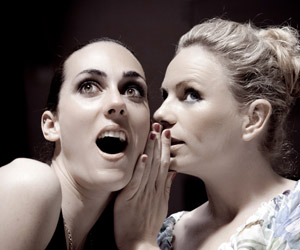 “We shouldn’t feel guilty for gossiping if the gossip helps prevent others from being taken advantage of,” said Matthew Feinberg, a UC Berkeley social psychologist and lead author of the paper.

The study focused on “prosocial” gossip that “has the function of warning others about untrustworthy or dishonest people,” said Willer, as opposed to the voyeuristic rumor-mongering about the ups and downs of such tabloid celebrities as Kim Kardashian and Charlie Sheen.

In a series of four experiments, researchers used games in which the players’ generosity toward each other was measured by how many dollars or points they shared. In the first experiment, 51 volunteers were hooked up to heart rate monitors as they observed the scores of two people playing the game. After a couple of rounds, the observers could see that one player was not playing by the rules and was hoarding all the points.

Observers’ heart rates increased as they witnessed the cheating, and most seized the opportunity to slip a “gossip note” to warn a new player that his or her contender was unlikely to play fair. The experience of passing on the information calmed this rise in heart rate.

“Passing on the gossip note ameliorated their negative feelings and tempered their frustration,” Willer said. “Gossiping made them feel better.”

In the second experiment, 111 participants filled out questionnaires about their level of altruism and cooperativeness. They then observed monitors showing the scores from three rounds of the economic trust game, and saw that one player was cheating.

The more prosocial observers reported feeling frustrated by the betrayal and then relieved to be given a chance to pass a gossip note to the next player to prevent exploitation.

“A central reason for engaging in gossip was to help others out – more so than just to talk trash about the selfish individual,” Feinberg said.  “Also, the higher participants scored on being altruistic, the more likely they were to experience negative emotions after witnessing the selfish behavior and the more likely they were to engage in the gossip.”

To raise the stakes, participants in the third experiment were asked to go so far as to sacrifice the pay they received to be in the study if they wanted to send a gossip note. Moreover, their sacrifice would not negatively impact the selfish player’s score. Still, a large majority of observers agreed to take the financial hit just to send the gossip note.

“People paid money to gossip even when they couldn’t affect the selfish person’s outcome,” Feinberg said.

In the final study, 300 participants from around the country were recruited via Craigslist to play several rounds of the economic trust game online. They played using raffle tickets that would be entered in a drawing for a $50 cash prize –-an extra incentive to hold on to as many raffle tickets as possible.

Some players were told that the observers during a break could pass a gossip note to players in the next round to alert them to individuals not playing fairly. The threat of being the subject of negative gossip spurred virtually all the players to act more generously, especially those who had scored low on an altruism questionnaire taken prior to the game.

Together, the results from all four experiments show that “when we observe someone behave in an immoral way, we get frustrated,” Willer said. “But being able to communicate this information to others who could be helped makes us feel better.”

This article was originally published by the University of California, Berkeley, News Center.