When Hurricane Katrina hit New Orleans in 2005, a mandatory evacuation order did not stop thousands of people from staying to ride out the storm. Many died or were left stranded when the levees broke, leading officials and the general public wondering why they stayed behind. Explanations varied, but many Americans thought those who didn’t heed the warning were either too stubborn or too stupid to leave when they could have and blamed the victims for their plight. 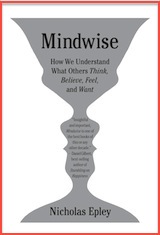 Quick judgments about people like these is what social-psychologist Nicholas Epley warns against in his new book, Mindwise: How We Understand What Others Think, Believe, Feel, and Want. According to Epley, though we humans are equipped with a brain specially attuned to predict what others are thinking, feeling, and planning, there are many cases in which our “mindreading” powers lead us astray.

His book is full of fascinating research on how our social brains work and why we sometimes can’t look beyond our own preconceptions. Epley suggests we have a tendency to overestimate our “mindreading” abilities, ascribing to people intentions they don’t have, based on our projections of how we would act in a certain situation and on our assumption that others think like us when they don’t.

Part of the problem is that we tend to believe we are special—that others are not as smart or capable as we are, he writes. So, while our evaluations of others may be vulnerable to the “correspondence bias”—the tendency to believe that one’s mind directly corresponds to one’s actions—we don’t make similar judgments about our own motivations.  This can keep us from seeing things from another’s perspective—especially how context can influence one’s behaviors and thoughts.

Take the victims of Hurricane Katrina, for example. Many Americans saw TV coverage suggesting that those who died had stubbornly refused to save themselves, even after they’d been warned. But, when we consider that the victims were generally poor—without the financial means to get themselves out of town or to ride out the storm in a hotel—the story is very different. If we let our biases color the analysis, we miss these important details and attribute people’s actions to stupidity or stubbornness rather than to their very real circumstances.

This happens all of the time—in relationships, at work, in politics. We miss important clues, thinking we understand someone when we don’t. Sadly, these misunderstandings can have dire consequences, causing conflicts that can end relationships or even escalate into war.

Another troubling tendency, Epley writes, is that we tend to believe people who are different than us are less intelligent and don’t have feelings like ours. Dehumanizing others happens more when we are physically distant from each other, since physical cues like eye contact or touch that normally activate our sense of connection aren’t engaged.

Luckily, we can still be empathic by imagining how others think and feel, using the “mindreading” circuit of our brain—the medial prefrontal cortex or MPFC. Still, scientists have shown that we tend to use the MPFC most when we are trying to understand the minds of intimate others—e.g. a spouse or a good friend—and less when trying to understand the mind of someone “different”—e.g. a member of a different cultural group or opposing political party.

Lack of engagement in the MPFC can create the illusion that someone else is inferior and less human, and may account for why victims of Hurricane Katrina—many of them African American and poor—were depicted so poorly in the media and among many White Americans. It may also account for why many Americans can’t fathom the minds of Islamic terrorists, whom they assume are just inhuman monsters incapable of the same feelings and motivations as us, writes Epley.

Our tendency to exaggerate perceived differences between people based on little evidence can get us into trouble. For example, researchers have found that women tend to be more empathic than men when given empathy tests. But the difference is relatively small—in fact, much smaller than differences found within groups of men or women. Yet exaggerating this finding and making more of it than it merits can lead women to stereotype men as unsympathetic or “from Mars.”

Epley writes that we don’t just misread others: we often don’t understand our own minds, either. For example, in one study he and his colleagues asked commuters if they would be happier with their commute if they were left alone to enjoy their solitude or if they conversed with a stranger during their ride. Most predicted that they’d be happier if left alone—but they were wrong. The happiest commuters were those who talked to someone else, and it didn’t matter if the commuters were self-described introverts or extroverts. Satisfying our innate need for connection is a sure route to happiness, no matter what we may think.

The sad conclusion to all of this is that we have a tendency to underestimate the richness and variety of other people’s minds while not depreciating our own, which can lead to misunderstandings and even dehumanization. And though our intuition can sometimes reveal important insights into another person, we may rely too heavily on correspondence bias or stereotyping to truly get the picture.

Still, there is hope. One of the best ways to avoid mindreading errors is to simply spend time with others and listen to them.  Encouraging honest dialogue in an environment where one can be safe to do so opens a lot of doors, whether it’s within a marriage, at the office, or between nations. As long as we recognize that we can’t always trust our intuition, we will be better equipped to witness the circumstances that drive people’s behavior and to be open to learning about their complex emotions and minds.

And a big dose of humble pie wouldn’t hurt, either. Epley writes, “Sometimes a sense of humility is the best our wise minds can offer, recognizing that there’s more to the mind of another person than we may ever imagine.”