Today’s American teenagers reportedly spend most of their screen time on social media (such as TikTok, YouTube, and Instagram), followed by other activities such as gaming, streaming movies and TV, and messaging friends and family. 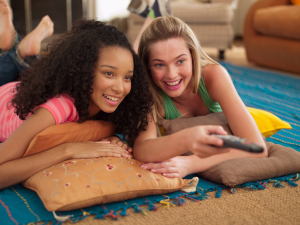 While some parents and adults might worry about social media taking Gen Z’s time away from more “productive” activities with friends and family, there’s at least one fair reason for it: Social media is the place where Gen Z feel they can find the most authentic and diverse content, according to our recent study at the Center for Scholars & Storytellers.

Meanwhile, movies and television shows typically targeting American adolescents are often made without a committed consideration of their perspectives. It’s no surprise that traditional television and movie content just doesn’t feel very authentic to teens.

To address this significant gap and make teenagers’ voices be heard by Hollywood content creators, our research team surveyed 662 teenagers (ages 13 to 18) across the United States and directly asked them what topics they wish to see in entertainment media.

American teenagers now want to see Hollywood content with authentic, inclusive, and positive storytelling that better reflects their true lives and families. Specifically, when asked about what they’d like to see portrayed in the shows and movies they watch, these are the topics they mentioned.

Hopeful, uplifting stories about people beating the odds. Who doesn’t like a good story of overcoming adversity? Many existing portrayals of teen life highlight the negative happenstances of their life experiences and the resulting troubles that arise from them, such as The Hunger Games. Rather than watching media that dwell on trauma and suffering, teens are wishing to see stories inspiring hope and encouragement with characters beating the odds that are piled against them.

Stories about people with lives unlike their own. This type of content was tied for most popular among the teens in our study. After all, the teenage years are a phase of discovering oneself and learning more about other people and the larger society. Storytelling in media—with engaging visuals and sounds—grants the perfect opportunity to tell and let the audience engage with those authentic and varied narratives.

For example, the media offers a cisgender, heterosexual individual a safe and enjoyable channel to learn and hear more about the life of someone who identifies as a part of the LGBTQ+ community. It provides them with insights they might have difficulty finding elsewhere.

“Even nowadays, most movies or tv shows consist of very few people of color. If there are people of color they are typically portrayed very stereotypically,” said a 16-year-old female respondent of Asian background.

Superheroes. Superhero content, such as that found in the Marvel Cinematic Universe (shoutout to their recent strides in representation), continues to fascinate teenage audiences. From enhanced and skilled characters to morally gray opponents, these stories captivate teens in fantastical ways, while still having impactful undertones that relate to real experiences.

Mental health. Mental health is critical for teen life. The latest statistics find that over 1 in 10 youth in the U.S. are experiencing depression, which has severely impaired their social life; and that 11.5% of youth (or over 2.7 million) are experiencing severe major depression. For their third top choice of topic, teens are wanting to see mental health issues depicted and addressed in what they watch.

Family life. Society often makes the assumption that teenagers are striving hard for autonomy and don’t want much to do with their families. Although family may look different for different teens, a majority of our respondents ranked family life as their fourth desired topic in the media. There is a growing wish to see their family units and relationships reflected in what they watch. Even if fleeting, moments of parents or caregivers having fruitful and intimate conversations with teen characters can be impactful.

Additionally, when asked whether they’d prefer to see escapist or more true-to-life movies and television shows, teenagers across all demographics resoundingly rejected aspirational content that valorizes fame and financial gain that Hollywood used to popularize in the early to mid-2000s. This includes shows like Gossip Girl, iCarly, and Hannah Montana.

Instead, more teens opted for fun and escapist content (37.8% of respondents), real-life issues that impact society (21%), and relatable content (19.6%).

Teenagers’ rejection of aspirational content signals a substantial shift in their definition of success and their worldviews, which differ from previous generations one or two decades ago. Perhaps the recent rise of social media plays a critical role in reshaping adolescents’ perceptions and taste.

These findings are telling us that contrary to stereotypical notions of teenage angst and self-absorption, especially in our current complex socio-political landscape, adolescents are leaning toward stories that provide hope and knowledge of others while also remaining fun and authentic for their age.

Taken together, our findings highlight teenagers’ noticeable desire for media experiences that reflect a world characterized by diversity, genuineness, and uplifting experiences—a need that has seemingly not been fulfilled by existing Hollywood content, nor been considered alongside the popularity of social media.

Stories have the power to consciously and unconsciously shape our thinking. Stories can drive conversations and inspire us to seek information about important topics. For example, in one of our previous studies, 88% of surveyed teenagers spoke about mental health topics, and 92% reported looking up mental health information after watching the popular TV show 13 Reasons Why.

But, most importantly, stories need to be relatable and authentic to real people and real lives.

As Hollywood ponders their next big hit for adolescent audiences, the first step should always be listening to what teenagers have to say.