If the prospect of networking makes you anxious or uncomfortable, you’re not alone. Research suggests that many of us feel ambivalent about networking. For instance, we may feel that we don’t have enough time, we may feel inauthentic while networking, or we may worry about how we’re coming across to others. 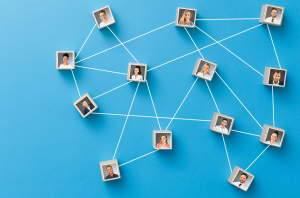 However, according to Marissa King, professor of organizational behavior at the Yale School of Management, we have a lot to gain from overcoming these barriers and making a concerted effort to cultivate our social networks. In her new book Social Chemistry: Decoding the Elements of Human Connection, King argues that we may be overlooking a key aspect of networking if we just think about how many people we know: instead, we need to pay attention to how our social networks are structured.

In other words, networking isn’t just a numbers game.

“The notion that we often hear… that it’s the size of your network that matters, or the number of people you know, was simply wrong,” King concludes, based on her research studying social networks. “What was far more important than the number of people you know was the strength and the quality of your social connections.” Her book offers a framework for understanding your social networking style and building strong, authentic bonds.

The building blocks of social networks

According to King, there are three main styles of networking that people tend to use when navigating the social world. First, King explains, conveners tend to form close, interconnected groups. For example, if you and your coworkers hang out socially, and many of you are in the same PTA at your children’s school, you are likely part of a convening network. Conveners, in other words, tend to have social networks populated by mutual friends—if you’re a convener, it’s likely that two of your friends are also friends with each other.

On the other hand, brokers tend to have social networks that overlap less. If you’re a broker, you may have several friend groups that don’t interact with each other. At work, a broker might be someone who has connections across different parts of the organization and serves to facilitate collaboration across departments.

The third group King identifies are the expansionists. Expansionists are social butterflies—they tend to have extremely large social networks with numerous acquaintances.

Of course, in practice, it’s possible for one person to use multiple networking styles, and it’s common for our networking styles to change over time (for instance, young adults are more likely to be expansionists than older adults, and people’s social networks tend to become smaller after they have children). However, understanding these basic networking tendencies can help us understand the social world better. It can also help us to be more mindful about which parts of our network to call upon depending on the situation we find ourselves in.

Importantly, King explains, it isn’t the case that one networking style is inherently better than the others—each has its own unique set of pros and cons. “Different moments and challenges require different networks,” King writes. 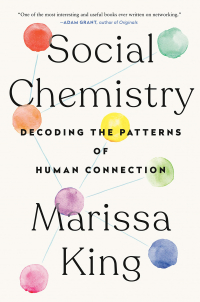 Convening networks tend to be a strong source of social support: Research has found that conveners tend to be less lonely. In networks of conveners, where everyone knows each other, people also tend to have higher levels of trust in each other. However, King explains, convening networks can also have a downside: Their insular nature means that their members may have less exposure to new ideas.

Being a broker, on the other hand, is likely to benefit us in contexts where innovation and creativity are valued, since brokers serve as the connecting link between groups with different ideas and experiences. Brokers can also play a role in bringing about social and political change that involves mobilizing different coalitions. In her research, King has found that brokers also appear to have better work-life balance, which may be due to their tendency to keep work and home life separate. However, being a broker between too many different groups also has the potential to be draining.

Expansionists’ popularity can help them make important professional connections. For example, if you’re job searching, having a large number of acquaintances can help locate new opportunities—research suggests that we’re likely to find jobs through people we know, but particularly through acquaintances (who know about opportunities we don’t) rather than close friends or family. However, expansionists’ large numbers of connections can also put them at risk for burnout from the many demands on their time.

How the pandemic has changed social networks

Of course, for many of us, the coronavirus pandemic has dramatically changed our social interactions over the past year. However, in an interview with Greater Good, King offers several suggestions for making the most of our social networks during the pandemic.

Since convening networks are key for providing social support, King recommends making time to regularly check in with those closest to us. Importantly, it’s not about the quantity of time we spend with others, but the quality: Short, focused interactions can be more impactful than distracted hours. King also highlights the importance of being intentional about our interactions with those we live with, since those relationships are the ones we may take for granted right now; spending eight hours working from the same home office isn’t a substitute for quality conversation or doing an activity together.

For those we don’t live with, it’s important to set aside time to connect. King explains that most friendships don’t end over a sudden, dramatic falling-out; instead, people end up losing touch because other obligations get in the way. However, the good news is that even a quick “thinking of you” text or a 15-minute phone call can help keep relationships going. And if you’re experiencing “Zoom fatigue,” that’s OK: King suggests that phone calls can actually be a better way to catch up than video chat (since it can be surprisingly difficult to interpret emotional expressions over video).

How to make networking less awkward

If you’re feeling like your social skills are a bit rusty after shelter-in-place, or the prospect of attending a networking mixer has always put butterflies in your stomach, King has some advice. First of all, she notes, we’re actually better at social interactions than we think we are. Researchers have uncovered something called the “liking gap”: In social interactions, we tend to think others are judging us more critically than they actually are. So that conversation you’re overthinking after the fact likely went much better than you realize.

It’s also important to remember that social skills are just that—skills—and we can improve on them with practice. King points to a study showing that people who were shy but had a flexible mindset—that is, they believed that it’s possible to change—behaved in more outgoing ways than shy individuals who had a fixed mindset.

If you have a tendency to be self-conscious during social interactions, try to flip the focus of your attention to the other person and learn about them. Research has found that people like us more when we ask them questions about themselves—especially when we listen carefully and ask thoughtful follow-up questions to what they’re saying.

King also points out that, after so much time with limited socializing, we’re all probably experiencing something similar right now. So, even if you feel awkward about being the first person to initiate a conversation, the other person will likely be glad you were willing to break the ice!