Researchers studying gratitude have found that being thankful and expressing it to others is good for our health and happiness. Not only does it feel good, it also helps us build trust and closer bonds with the people around us. 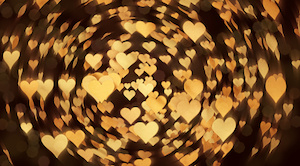 These benefits have mostly been observed in a two-person exchange—someone saying thanks and someone receiving thanks. Now, a new study suggests that expressing gratitude not only improves one-on-one relationships, but could bring entire groups together—inspiring a desire to help and connect in people who simply witness an act of gratitude.

In this extensive study, Sara Algoe of the University of North Carolina at Chapel Hill and her colleagues ran multiple experiments to investigate how witnessing gratitude affects people’s feelings toward the grateful person and the benefactor (the person who is being thanked).

They came up with a few different ways for participants to observe gratitude. In one experiment, participants were tasked with reading a movie review draft and underlining eye-catching passages for the reviewer’s benefit. Before they began, though, they saw an example (supposedly done by a previous participant). Several lines of text were underlined, as the assignment required, but many typos were also corrected, showing effort that went beyond the original assignment. In some cases, this help was acknowledged with a handwritten note from the reviewer saying, “Thank you so much for catching those typos!”

Afterward, participants underlined passages in another article by the reviewer, and researchers counted how many typos they corrected as a measure of their willingness to offer extra help. Then, people were asked how much they might like to be friends with the reviewer.

The results showed that people who had seen a note of gratitude were more willing to correct typos and help out, and more likely to want to become friends with the reviewer, than those who hadn’t.

“When people witness an expression of gratitude, they see that the grateful person is the kind of person who notices when other people do kind things and actually takes the time to acknowledge them—meaning, they’re a good social partner,” says Algoe. “People who are responsive as social partners are really desirable people.”

Based on other survey questions, Algoe and her team also discovered that participants wanted to help and affiliate with the person receiving the gratitude. That’s because receiving gratitude marks you as a person who is effective at being supportive or helpful, says Algoe.

“It’s helpful to know who the people in our environment are who will do nice things for other people, because they are attractive relationship partners,” she says.

What was the exact cause of participants’ reactions, though? It’s possible that people are attracted to others who seem positive in general, like the reviewer, or they simply felt elevated by witnessing the other participant’s generosity. To find out the active ingredient in gratitude and why it may have effects on bystanders, Algoe and her colleagues ran more experiments.

In one, they had participants watch videos where one member of a real-life couple expressed gratitude toward their partner. The videos varied in how much the grateful person praised their partner’s fine qualities—e.g., admiring their partner’s listening skills or their generous nature—and expressed how the partner’s generosity had benefitted them—e.g., helping them work through a difficult problem or save money they would have spent on a cab. The videos also varied in how warm, positive, or competent the person in the video appeared.

The results showed that participants were more drawn to videotaped individuals who praised their partner than to those who focused on how they’d benefitted personally.  True, they were also drawn to grateful people who seemed warm, competent, and positive—but those traits didn’t matter nearly as much as praising another’s fine qualities.

To Algoe, this points to a particularly important element of gratitude—its other-focused nature—which may be key to influencing witnesses of gratitude.

“When a grateful person actually takes the time to step outside of themselves and call attention to what was great about the other person’s actions—that’s what distinguishes gratitude from other kinds of positive emotional expressions,” she says.

Interestingly, Algoe’s findings weren’t affected by the gender of the witnesses, grateful people, or benefactors. Although men might fear that gratitude makes them look weak or become indebted, even men who expressed gratitude were rated as more competent than those who didn’t.

These findings build on prior research by showing that expressions of gratitude not only provide social glue for the people involved—the grateful person and the benefactor—but also spread beyond the dyad, affecting witnesses in ways that could reverberate throughout a group.

“It’s easy to imagine how this might work in a workplace, where people are actually attending to and acknowledging other people’s good deeds and kindnesses,” says Algoe. “A whole group of people could be inspired to be kinder to one another, and, through this interwoven kindness, the group itself could become a higher-functioning group.”

Does this mean we should all be expressing gratitude more frequently? Yes, says Algoe—though how it’s expressed could differ by context and culture. For some situations, she says, it may be appropriate to be demonstrative rather than verbal—giving a hug, for example, or bringing a gift of flowers. In another context, a simple thank you—especially if it’s sincere and not manipulative—will get the ball rolling.

Whatever the case, though, it’s clear we can do more to increase social connection if we acknowledge the good in those around us. “Gratitude expression seems to be a unique kind of emotional experience that is really well-suited for relationship building,” says Algoe.