In my research, I’ve invited couples in romantic relationships to come into the laboratory and thank their partner for something—with video cameras rolling. They express gratitude for a wide variety of things, big and small: for keeping him company in the hospital during a week-long stay, for making sure to prioritize visits to the in-laws, for driving to the grocery store with money when he forgot his wallet, for making (her favorite) banana pudding from scratch, or simply for grabbing him an extra treat at a workplace function. They are heartwarming conversations to witness. 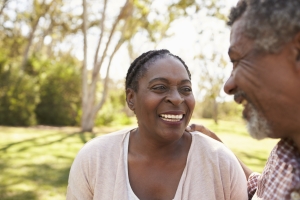 Lots of studies tout the personal benefits that can come from feeling and expressing gratitude in your relationships. People who express gratitude develop more positive evaluations of their relationships and even elicit more help and kindness from others. People who write letters of gratitude show improved mood and—especially if they feel low when they start—experience reduced symptoms of depression. What’s more, people who receive expressions of gratitude get a benefit, too.

Yet not all expressions of gratitude are created equal—and our thank yous don’t always go over well. How do we express gratitude to our partner in the most loving and constructive way?

The benefits of hearing thanks

In a series of studies, we asked people who had received an expression of gratitude for their actions about how understood, validated, and cared for they felt afterward. The more people feel this way, the more responsive they perceive their partners to be—one measure of a good thank you.

In one of these studies, we followed up with those participants six months later to see how they were doing. When they saw their partners as being more responsive in their expressions of gratitude during the laboratory session, they were more satisfied with their relationship even half a year later.

But was this simply about having a responsive partner in general, or is there something particularly beneficial about conveying responsiveness through gratitude? In a follow-up study, we tried to find out.

Again, participants who saw their partners as more responsive in expressing gratitude during the laboratory session—but not those who felt the same after personal disclosures—were more satisfied with their relationship over the subsequent month. In addition, they reported greater daily positive emotions, fewer negative emotions, greater satisfaction with life, and an even greater ability to adapt to change.

How to be a responsive partner

Something that was fascinating about these videorecorded conversations was that everyone expressed their gratitude in different ways. Some conversations were long, some short, some about important or seemingly unimportant things. Yet some of the thank-yous were perceived as more responsive and, in turn, forecasted bigger benefits for the person who heard them. What was the secret ingredient?

In another paper, we used almost 400 videorecordings of couples thanking each other and tested two possibilities:

Mentioning benefits to yourself and praising your partner’s actions are both positive expressions, and different people used one, the other, or both—they were independent from one another. But our research shows that mentioning benefits is not as important—it can be there or not. Instead, the expressions of gratitude that leave the biggest impact are sure to acknowledge what it was about the person’s actions that stood out as praiseworthy.

Specifically, benefactors who heard the grateful person elaborate more on how much they loved the gift did not have more positive feelings after hearing the expression or see the grateful partner as more responsive—it simply didn’t matter. However, when grateful people called out the praiseworthiness of their partner’s actions, their partners perceived them as being more responsive and were in a better mood.

In other words, the most impactful expressions of gratitude emphasize the “you” in thank you.

Collectively, my team’s work from these studies and those of others in the field suggest the following takeaways:

You’re already in a romantic relationship because you love the person. When they do something nice for you, that’s already good for you. But if you thank this person you love and care about when they do kind things for you, it’s a simple way to just show your love—and it sets the groundwork for so much more.

The short-term boost your partner might feel in the moments their kind actions are acknowledged can help bring them future benefits, like feeling better about the relationship and their life. That’s pretty great. Yet in turn, that also likely feeds back to help you in the long term. Based on a growing body of evidence, I have come to see gratitude as a gift that keeps on giving.