Does guilt get in the way of gratitude?

It does for me. After years living on my own out of town, I recently moved back home to live with my mom and stepdad to save up for a house. The trouble? Mom is always doing something nice for me, whether I ask for it or not. She throws my laundry in the wash while I’m at school and buys my favorite groceries.

I appreciate everything she does for me, and I know I should feel grateful, but sometimes I feel guilty instead—resentful, even—for all her care. In some embarrassing way, the feeling that I will never be able to repay her prevents me from feeling and expressing my gratitude. When she cooks me a delicious dinner, I’m grateful for the act, but not the dishes she’s left me with. Or I’ll just feel plain guilty that she hits the kitchen on my behalf after she’s had a long day hard at work.

Researchers have become increasingly interested in studying gratitude over the past decade, and the resounding message from their work is clear: Gratitude is good for our mental and physical health, and it may be an essential ingredient in happiness.

But in practice, simply feeling or expressing gratitude can be a challenge. Sometimes other feelings—like the guilt and indebtedness I feel—get in the way.

Moving back home has made me wonder: When people are good to us, why do we sometimes respond with guilt and resentment, not gratitude? And how can we overcome those negative feelings and just let ourselves be grateful?

These questions have become especially relevant in today’s economy, when so many people like me in their 20s—and some older folks—are dependent on other people for help, whether it be financial or otherwise.

Though research on gratitude is still relatively young, some researchers have started to address these questions, suggesting why gratitude can be so hard for some of us and what we can do to reach it more easily. Their work could help some of us actually feel closer to people who are kind to us, not just uneasily indebted to them.

When “thank you” is hard

One of these gratitude researchers is Phil Watkins, a professor at Eastern Washington University who has written about the differences between feelings of gratitude and indebtedness. Gratitude, according to Watkins, compels individuals to give back to their beneficiaries because they want to, whereas indebtedness implies a sort of obligation.

“I think it’s pretty clear that it does happen—people do feel indebted and grateful at the same time,” he says, “but I’d propose if you feel too indebted, then it’s hard to feel grateful.”

For some reason, I feel obligated to repay Mom, even though she hasn’t asked me to. Perhaps my failure to fulfill that imaginary obligation is what’s making me feel guilty. 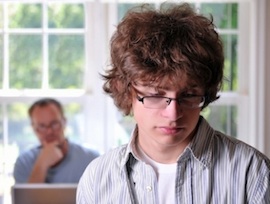 Giacomo Bono, a gratitude researcher and adjunct professor at California State University, Fullerton, speculates that guilt could coincide with or even obstruct gratitude in two situations. First, in a “survivor” situation where someone survives a tragedy that others do not, and second, in a situation where there’s inequity in a relationship over time—for example, in the case of a child and a parent.

“I could see a case where a person—especially a young person—could have a benefactor or mentor who they’ve received so much help from, so much investment from, that they feel guilty and grateful,” he says, nailing my situation exactly.

This can be true not only in parent-child relationships, but also in work settings where a budding professional relies on a superior, Bono says. In fact, he recalls a time when he was beginning his gratitude research and often had to call on his mentor—a pioneer in the field—for favors, including many letters of recommendation.

This sort of guilt-versus-gratitude scenario could potentially arise in any relationship between two people who are unequal in some way, including a teacher-student relationship where a student requires extra time or patience from an instructor.

Relationships aside, research suggests that gratitude may simply be harder for some than others, period. A 2009 study from George Mason and Hofstra universities found that men were less likely to feel and express gratitude than women, and that men were more likely to view a gift as a burden or obligation.

Personality plays a role, too, but a person’s situation is also important to consider, says JoAnn Tsang, a researcher at Baylor University.

For me, I think it’s pride and the lack of autonomy I feel that makes keeps me from feeling gratitude sans the negative feelings. I feel anxious and insecure knowing I couldn’t survive financially on my own right now without Mom’s help.

“When you remain in the position of needing help from someone else, when you don’t feel like you could do something on your own, it can cause anxiety and a lack of self-esteem,” Bono speculates. “I could see that as an adult, too.”

How to overcome all this

To get past the negative feelings, and to better cultivate gratitude, researchers recommend recognizing the opportunities your benefactor has given you, and making the most of those opportunities.

“Let them know that you’ve put their investment to use,” Bono says. “Be thankful to mentors who have given to you repeatedly because they believed in you.”

Bono and others also note that you may never feel like you can pay back your debts, so you shouldn’t try; instead, you should give back through your successes. For him, the feeling that he “owed” his mentor started to lessen when he became successful and no longer had to ask for frequent favors.

“I started to feel guilty at one point,” he says, “but that guilt subsided naturally when circumstances arose when I didn’t need him anymore.”

Along those same lines, I feel less guilty when Mom makes me me dinner on a day when I’m particularly proud of a project at work. It is also easier for me to feel grateful after I receive a scholarship or award at school, because in some weird way, I feel like I’ve earned her kindness.

For people who have struggled with guilt over a period of time, Tsang recommends thanking someone who has never been properly thanked, through a gesture like writing a letter. This can be especially useful for people who struggle to thank their benefactors face-to-face, as well as those who have fallen out of touch.

I suppose I should spend less time worrying—and more time repaying Mom through recognition and my successes—while I’m still lucky enough to have her around to do nice things for me.