Why can we act with kindness and generosity in one situation, but be cruel in another? What makes one person empathic and another person psychopathic? Does society play a role in nudging us toward more moral behavior, or is it ingrained in us?

These are some of the many questions addressed in Graham Music’s new book, The Good Life: Wellbeing and the new science of altruism, selfishness and immorality. Drawing from a large body of research from psychology, evolutionary biology, and neuroscience, Music distills what we know and don’t yet know about human nature and the role of the environment in shaping our moral character. 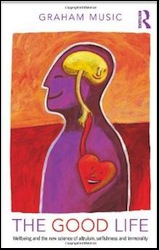 His book covers a lot of ground in relatively few pages. As a psychotherapist and teacher at the Tavistock and Portman Clinic in London, Music has particular expertise in human development, and the book is full of research on how altruism develops in children. We learn, for example, that kids will instinctively help adults in distress—not for rewards, but for the sheer pleasure of giving. In addition, even very young children can distinguish “nice” from “fair” behavior in others, and will react negatively toward someone they think is being unfair.

But why do some kids not keep their moral and altruistic sense? Music believes that early childhood relationships steer kids down different paths. Kids born into loving homes will form positive attachments with caregivers, which will help them to trust the world and feel safe to be kind and caring themselves. Those born into stressful or abusive homes will form problematic attachments and learn that the world is not a safe place. They may have trouble being empathic and forming relationships, which impact their altruistic behavior later in life.

One reason early experiences may be so important is that they seem to impact oxytocin levels. Oxytocin is a hormone involved in trust-building and bonding, and is present in higher levels in both fathers and mothers in the months after becoming a parent.

But children in abusive situations—where trust and bonding do not occur, perhaps because of low oxytocin levels in caregivers—can develop abnormal oxytocin response patterns, making them susceptible to social problems later on. For example, when researchers gave oxytocin to women who had been sexually abused as kids, the women demonstrated either abnormally high or abnormally low trusting behavior as compared to women without that history.

Even adults who are empathic and altruistic may shut off their prosocial tendencies when in negative social environments. We all will be less inclined to be kind and helpful toward others when we are stressed or under duress, especially if those “others” appear to be from groups we don’t belong to. In addition, we will tend to act less generously toward people if we live in a society where there is a lot of economic disparity between the haves and have-nots.

Contrarily, when we are in a good mood or inspired by the generosity of those around us, we tend to be kinder and more generous toward others. And acting with generosity makes us happier as well.

Though much of Music’s book describes the biology and environmental circumstances that affect our behavior without our conscious awareness, he does describe at least some ways a person can increase empathy and altruism through conscious effort—for example, through mindful meditation.

In one study, people who’d gone through an 8-week mindfulness class were four times more likely to get up and offer their seat to a person on crutches entering a waiting room than those who hadn’t had the course. This suggests that we can influence our prosocial behavior somewhat, if given the right tools.

Still, readers will be left with an impending sense that society is driving us in the wrong direction. Music argues that although evidence suggests early home environments shape our social behavior in important ways, we still do little to protect our youngest citizens from harm. We could do a lot more to increase child well-being by supporting parents raising young children—through better prenatal care and parenting training, for example—so that they can provide what kids need most to grow into the moral, altruistic citizens of tomorrow: loving care, with lots of physical and emotional support.

All we need now is the will—and the prosocial capacity—to act on this knowledge.