Do nice guys really finish last? It’s hard to argue against selfishness and egocentrism when it comes to self-survival.  Evolution has us hard wired to see that our genes succeed, and scientists have long held the belief that this drives humans toward being instinctually selfish. 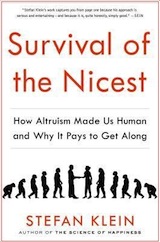 But according to physicist and science writer Stefan Klein’s new book, the idea that we are born to be selfish is dead wrong. In Survival of the Nicest: How Altruism Made Us Human and Why It Pays to Get Along Klein argues that selflessness, not selfishness, creates more genetic success, and that proof for this has been gaining momentum among scientists, gradually challenging the “survival of the fittest” model in evolution.

Selflessness, after all, has some incredible benefits. With selflessness comes compassion and empathy, the combination of which lays the foundation for vital survival skills that were required by humans to colonize the world—skills, for example, like the ability to learn to follow common goals.

“If our ancestors had not learned to follow common goals, they would never have become sedentary, never have crossed the oceans and colonized the entire earth…never have invented music, art, and all the comforts of a modern life,” writes Klein.

Klein suggests humanity’s rise would likely have been impossible without selflessness, and that selflessness is vital to our species’ continued success.

He scrutinizes “Homo economicus,” a popular figure created by economists to suggest that the ideal man is an egocentric only concerned with his own concrete advantage, no matter the consequences. Homo economicus fits perfectly with the idea of “survival of the fittest” on the individual level; but Klein writes that the reality of human evolution, in fact, reflects survival of the fittest on a group level. Specifically, individuals make sacrifices within groups or perform selfless actions that, while perhaps detrimental to the individual, become beneficial to the group as a whole.

An experiment by social psychologist Muzafer Sherif illustrates his point. Sherif created a summer camp experience in which two groups of eleven year-old boys were kept separate so that neither knew the other existed and natural leaders and followers could emerge within each group. Later, Sherif introduced the groups to each other and a fierce competition grew between the groups, changing the way members interacted within their group. Klein writes, “The boys helped each other and shared more…the more bitter the rivalry became, the stronger the intra-group selflessness grew.” In other words, the boys’ mentality switched from survival of the self to survival of the group.

Ultimately, Sherif found that he could reconcile all of the boys at the camp by uniting them on a common goal. He created problems around the camp that could only be solved by the groups working together. Sherif’s experiment is regarded as “the classic path to reconciliation,” and Klein applies it to real world conflicts like post-war Europe, in which the rise of the Soviet Union led to the previously warring Western Europeans uniting over a common goal.

Klein spends much of the book examining humanity’s inborn inclination for selflessness. An insightful example he offers is an investigation at the Max Planck Institute for Evolutionary Anthropology by developmental psychologists Felix Warneken and Michael Tomasello, in which a group of eighteen month olds were tested on their ability to be helpful without the motivation of a reward. The researchers exposed the children to an adult struggling to either reach a small object that was just out of reach for the adult but close enough to the child, or open a cracked door while holding a grocery bag. They found that the children consistently tried to lift up the object and hand it to the adult, or push the door all the way open for the adult to pass through. Klein argues that, “they had obviously understood the problem the adult was having” and that children naturally develop “an inclination to help others.”

This example points to one of the book’s key strengths—its breadth. From psychological experiments to anthropological studies and historical events like the Holocaust or 9/11, Klein seamlessly weaves his way through all to present compelling evidence for why humans have evolved to be selfless. Survival of the Nicest entertainingly informs its readers of how they are born to be altruistic, and why—when it comes to genetic survival, at least—nice guys do not finish last.