Kids today are growing up on social media, which—as much as it connects us to others in new ways—seems to offer an endless frenzy of opportunities for self-promotion and self-absorption. Learning a habit of humility can be a peaceful counterbalance to help our kids remain kind and grounded. 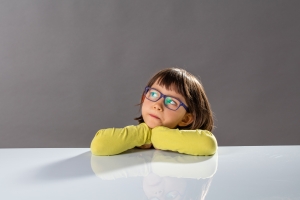 Researchers have identified two different aspects of humility. On a personal level, humble people have a secure identity that is neither arrogant nor self-deprecating, and they are open-minded about new information. On a social level, humble people focus on others and see others as having the same inherent worth as themselves.

Yet there isn’t much research on how or when humility shows up in children. Understanding how humility develops could help us not just raise humble kids but also promote a more humble society in the long run. So in a recent study, psychologist Judith Danovitch and her colleagues delved into the roots of humility by investigating what it looks like in children’s brains.

Nearly 130 six to eight year olds from Michigan, who were mostly European American, completed two tests of intellectual humility. First, the researchers asked the children to rate how much they knew about twelve topics—some related to biology, like “why fish can only live in water” or “why some people are born with red hair,” and some related to mechanics, like “how an elevator works” or “why cars need gas.”

Then, the researchers told the children they would be teamed up with a doctor and a mechanic to see how many questions their team could answer correctly about these topics. The children had to decide which team member would answer each question. Children who rated their knowledge as lower and delegated questions to the doctor and mechanic were considered more humble.

The researchers measured children’s intelligence with a brief IQ test, and then asked them to play a computer game that involved helping a zookeeper capture animals that had escaped from their cages by pressing the spacebar when they saw certain animals, but not pressing the spacebar when they saw orangutans. Children played the game while having their brain activity recorded via electroencephalogram (EEG), which allowed the researchers to see how children responded when they made mistakes during the game.

Overall, Danovitch and her colleagues found that older children showed greater humility than younger children, and (irrespective of age) children who humbly rated their knowledge as lower were more intelligent. They also observed a link between kids’ behavior in the trivia game and their brain activity during the zoo game.

Kids who had humbly delegated questions to others “paid closer attention to their mistakes, or were more aware of having made a mistake,” according to certain brain activity that indicated conscious reflection on errors.

Taken together, these findings offer some hints about how humility might allow kids to cooperate with others and gain knowledge over time. By slowing down to notice and reflect on their mistakes rather than reflexively ignoring or denying them, kids can turn a difficult task into a learning opportunity.

As humility is developing in the brain, research suggests that kids are also starting to be able to detect—and appreciate—humility in the people around them. In a series of three studies, researchers Sara Hagá and Kristina Olson explored young people’s impressions of others. They asked participants to listen to how three people answered questions: One person answered with arrogance and was immediately dismissive of others’ beliefs. Another person responded with diffidence and was reticent about giving an opinion. The last person replied with humility—being pretty sure in answering while also welcoming others’ suggestions. The researchers asked participants how much they liked and wanted to hang out with each person.

“These results are encouraging in the sense that if societies benefit from having intellectually humble members (e.g., who will ease intergroup relations and conflict resolution), it is valuable to know that intellectually humble people will actually be perceived in a positive light from quite early on in development,” explain Hagá and Olson.

Although we don’t know exactly how to encourage humility in young kids yet, researchers have observed some things that humble kids have in common.

For example, humility seems to go hand in hand with purpose. In a study by psychologist Kendall Cotton Bronk, purposeful youth spontaneously expressed humility in interviews with her research team. The synergy between humility and purpose seemed to help youth seek out mentors and work with like-minded peers. As with the kids playing the trivia game, humility involves asking others for support—which could eventually help kids reach their goals and make a mark on the world.

“In each case, humility supported the youths’ pursuit of purpose and vice versa,” Bronk explains. “The two characteristics work together to promote positive youth development.”

In another study, Marcus Morse described participants, including youth as young as 17 years old, feeling humility during nature adventures. One adventurer in the study described:

When you stop and you look around you, you realize how profoundly unimportant you are to the natural flow of life as it unfolds in there. And I think . . . that [is a] sort of lesson in humility. When I say I’m left with this feeling of awe and an impression of the extraordinary beauty of it, its impact on me as a person is a humbling one. And it makes me profoundly aware of how unimportant I am personally, that my species is not the be-all and the end-all.

These results are in line with recent research that found that nature-induced awe promotes humility. In the face of an expansive view of nature, participants felt smaller—a phenomenon called self-diminishment. Family trips to parks, beaches, and mountains may help children experience humility as they take in the natural world.

The science of humility has steadily expanded in the last 20 years and has included studies of how adults can become more humble. A remaining task for researchers is to shed light on what other kinds of strategies can help us foster humility in our kids. Then we can help them gain the strength not just to see themselves with authenticity but also to share their authentic self with others.