During downtime, some of us daydream while others might focus on a to-do list, or get stuck in a negative loop. Psychology has traditionally defined all these thought patterns as variations of “mind-wandering.”

But a review of brain imaging studies led by researchers at UC Berkeley and the University of British Columbia offers a new way of looking at spontaneous versus controlled thinking, challenging the adage that a wandering mind is an unhappy mind. 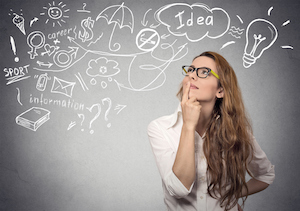 It suggests that increased awareness of how our thoughts move when our brains are at rest could lead to better diagnoses and targeted treatments for such mental conditions as depression, anxiety, and attention deficit hyperactivity disorder (ADHD).

“It’s important to know not only the difference between free-ranging mind-wandering and sticky, obsessive thoughts, but also to understand, within this framework, how these types of thinking work together,” said review co-author Zachary Irving, a postdoctoral scholar at UC Berkeley.

Irving and fellow authors of the review, published in the November issue of Nature Reviews Neuroscience, looked at three different ways in which people think when they’re not directly engaged in tasks: spontaneous thought, ruminative thought, and goal-directed thought.

“We propose that mind-wandering isn’t an odd quirk of the mind,” said the review’s lead author Kalina Christoff, a psychology professor at the University of British Columbia. “Rather, it’s something that the mind does when it enters into a spontaneous mode. Without this spontaneous mode, we couldn’t do things like dream or think creatively.”

Irving, who has ADHD, said there are upsides to the most stigmatized mental disorders.

“Everyone’s mind has a natural ebb and flow of thought, but our framework reconceptualizes disorders like ADHD, depression, and anxiety as extensions of that normal variation in thinking,” said Irving. “This framework suggests, in a sense, that we all have someone with anxiety and ADHD in our minds. The anxious mind helps us focus on what’s personally important; the ADHD mind allows us to think freely and creatively.”

They found that interactions between large-scale neural networks offered insights into how the resting mind moves. For example, their review of brain-imaging studies found that when the brain was focused on a task at hand, its prefrontal “executive” network, which governs planning and impulse control, among other functions, constrains other brain activity.

When stuck in a negative loop, such as anxious rumination, the brain’s “salience” network, which processes emotions, took control, shutting off most other networks. Not surprisingly, spontaneous thought, such as daydreaming, dreaming during sleep, and other forms of free association, were linked to far lower activity in the neural networks responsible for controlled thinking, allowing the imagination to flow freely.

“Let’s say you’re walking to the grocery store,” Irving said. “At first, your mind wanders to a plethora of ideas: your new shirt, a joke you heard today, an upcoming ski trip to Lake Tahoe. Then your thoughts become automatically constrained when you start to worry about a looming work deadline that needs to be met before the Tahoe trip. Then you realize that your worries are making you miserable, so you deliberately constrain your thoughts, forcing your mind back to grocery shopping.”

Historically, Irving said, the field of psychology has approached mental disorders separately, as though each were in a vacuum rather than being interconnected.

“Clinicians have studied compulsive rumination in isolation, and ADHD in isolation, but now there’s a huge interest in how we can make sure that the psychology and neuroscience literature is more closely aligned to what is happening in our heads,” Irving said.