Work life has changed drastically over the past two decades. We have gone from working with single information objects such as typewriters to working with constant digital distractions like emails, text messages, social media, and more. In this 24/7 distracted environment our attention comes under siege—and that has detrimental consequences for our productivity and well-being.

Our minds are wandering from what we are doing 46.9 percent of the time, as research by Paul Gilbert and Matt Killingworth reveals. In a work context, this means that almost half of our time we are not truly present with our tasks. In fact, other businesses are making money from our wandering attention. Facebook makes it from ads, while Google sells our clicks.

We are facing an Attention Economy where one of the most valuable currencies is a clear, calm, and focused attention. But how can that be achieved? More and more companies and individuals are looking to mindfulness to help us thrive in the attention economy.

Getting one second ahead 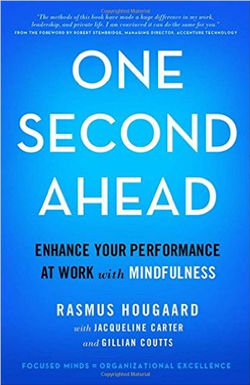 This essay is adapted from One Second Ahead: Enhance Your Performance at Work with Mindfulness (Palgrave Macmillan, 2015).

Everybody talks about mindfulness and praises its many benefits. But what is the DNA of mindfulness? And why does it seem to be a foundational key to surviving and thriving in an attention economy?

Jacob was a senior manager in a large financial services company. Like most of his counterparts, he was always “on”—connected to the office in one way or another, all day, every day. Day in, day out, he dealt with a steady stream of e-mails and an overloaded calendar of meetings. Jacob was facing the attention economy.

When I first met Jacob, he told me that he didn’t feel in control of his life. He felt like he was always trying to catch up, always overloaded with external forces—people and tasks—dictating his day-to-day reality. He felt he was living on autopilot, merely reacting to what was thrown at him.

In our first meeting, Jacob committed to undertake a four-month training program. During that time, we met for ten one-hour sessions and he dedicated ten minutes a day to mindfulness training. It was a significant investment of time considering his already busy work schedule. After the four months had gone by, I asked Jacob what he’d gained from the program. His answer: “One second.”

At first, his response took me by surprise. Four months of effort and daily training to gain only one second? That seemed like a meager return.

But then he explained:

Previously, when something happened, I reacted automatically. Every time an e-mail came in, I read it. Every time I received a text, I answered it. Whenever a thought or emotion popped into my head, I paid attention to it and allowed it to take my focus away from what I was doing. I was a victim of my own automatic reactions. The four months of training have given me a one-second mental gap between what happens and my own response. It feels like I’m one second ahead, so that I can choose my response rather than being a victim of my automatic reactions. I can’t always control what happens in life, but I’ve developed the freedom to choose my response to it.

Jacob’s story clearly describes what millions of busy people experience every day. But one second? What can change in one second? Everything.

In our low-latency world, speed is a factor in any competition—sports, politics, and especially business. This is truer now than ever before. With today’s high-frequency trading, millions of dollars can change hands in a millisecond. That’s one-tenth the time it takes to blink. As the speed of business approaches the speed of light, one second is the difference between performance and high performance. For Jacob, one second gave him the freedom to control his thoughts, his actions, and, more profoundly, his life.

The one second of mental space provided him the mental capacity to make better choices, moment by moment, in business as well as in life. Mindfulness, in this way, can be a game changer in an attention economy, because of its direct impact on how the brain functions. It can change our entire mental operating system and enhance not only individual but, if applied collectively, also organizational performance.

Training for the attention economy

Training our mind is possible.

Decades of research show that our brains are changeable. It’s called neuroplasticity. Any action we do or thought we think is creating neural pathways in our brain, whereby it is easier to repeat. The brain is changing according to how we use it.

This means we are not predefined by what we are now, but rather we are recreating ourselves by what we do now. This means that every moment we spend with a focused and clear mind, focus and clarity becomes a trait of our brain. In the context of the attention economy, this means we are not destined to have a wandering mind. We can train ourselves and gain high levels of attention, focus, and clarity of mind—and thereby become better leaders of our own lives and the people we lead.

Realizing benefits from mindfulness requires formal training, which can be viewed as going to the gym for the mind. Our approach to mindfulness training includes helping individuals enhance focus and awareness.

Focus is about training the mind to put the mind’s spotlight on a particular task, with minimal distraction, for a long as you want, with minimal effort. Awareness involves being open and seeing clearly what is happening internally and externally—and making wise choices about where to focus your attention. The opposite of open awareness is to be on autopilot, not having awareness of where you direct your sharp focus, which is the opposite of distraction. 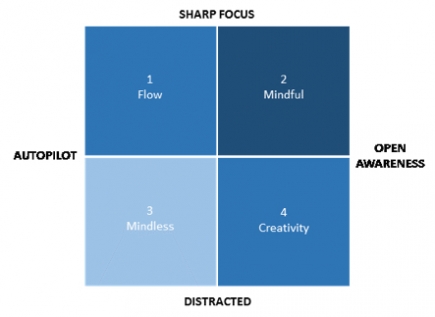  In the first quadrant of the illustration to the left, you are focused but on autopilot. Your state of mind can be described as being in “flow.” That often happens spontaneously when we do routine tasks or engage in a repetitious activity like running. The risk of the flow state is that we lack awareness. In leadership, lack of awareness can mean the difference between picking up on an employee’s stress signals and pushing too far. Or not noticing your own stress, for that matter.

In the fourth quadrant, you are aware but easily distracted. There can be benefits to loosening focus and allowing random thoughts to bubble up. Some people find that they come up with more creative ideas in this quadrant. But if your mind is too distracted, you’ll have difficulty retaining any good ideas. Good ideas only become innovative solutions when you have the focus to retain and execute them in the second quadrant.

In the third quadrant, you’re neither focused nor aware. You are mindless. And it is not even a relaxing state to be in because your mind is constantly engaged in random activities and thoughts. Not much good can be said about it.

But mindfulness is not really about the bottom line. It’s a way of being. It’s a way of showing up in life with kindness, openness, and presence. The best way to make others see the benefits of these qualities is to be them yourself. Of course, I know this is much easier said than done in our world of constant disruption and instant gratification. But it is worth the effort. Because mindfulness makes us happier and kinder. And happy, kind people make for happier and kinder societies.