Young people are demanding change. In the last few days, young Indigenous activists and their supporters blocked parliamentarians in Victoria, B.C., from accessing the provincial legislature and led waves of protest across the country. 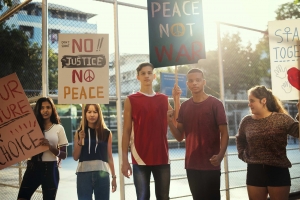 For some young people, climate change is urgent. For others, gun violence is a crisis. From truth and reconciliation to inclusion and diversity and mental health, young people are bringing awareness to societal crises and making headlines along the way.

Historically, this is really nothing new. Young people have long been leaders and catalysts of important movements. Unfortunately, these change-makers are often thought to be outside of what is considered typical of this age group.

Young people are often labelled problematic, selfish, or not yet ready to lead. This negative view of young people aligns with the multitude of research studies that frame their questions within a deficit model.

In a deficit model, the standard for healthy development is preventing behavioral or emotional problems. In both cases, there is a failure to acknowledge youth’s capacity or motivation to contribute to something larger. Underestimating youth is a mistake. Of course, it is important to acknowledge and study the risks and barriers faced by this age group, but if we do not balance this view with understanding their capacities and contribution, it can lead to some faulty assumptions.

What youth can do

In our Community and Youth research lab, we use a positive psychology approach. As such, we examine the positive motivations and capacities of youth. We are especially interested in the role young people play in improving our society, as well as the role communities can play to offer young people contexts that allow them to thrive.

Our research is rooted in the psychosocial model of Erik Erikson developed in the 1950s and 1960s. When boiled down to its simplest form, Erikson’s theory states that we all face a series of crises across our lifespan. How we resolve these crises helps determine our developmental success.

For example, in adolescence we face the crisis of identity versus identity diffusion; in midlife we face generativity versus stagnation. That is, when we’re young, we’re trying to figure out who we are and what matters to us, and as we age, we become more concerned with what we’re leaving behind.

Generativity—defined as concern for future generations as a legacy of the self—is well-studied. Most studies on generativity only consider people in middle age, even though there is evidence to suggest that this concern for the future and one’s own legacy is important earlier in the lifespan.

In fact, young people do share a concern for the future and their contribution to it. Our research shows that young people between the ages of 14 and 29 show levels of generative motivation that are as high or even higher than adults’. Early generativity is also associated with caring friendships, community involvement, and healthy identity development in adolescence and young adulthood. So not only are young people interested and capable of caring for future generations, but doing so is likely good for them.

Beyond the research, Autumn Peltier, a young activist advocating for clean water, has said, “We are the keepers of the generations yet to come.” She leaves little room for doubt that young people can be motivated by generativity.

Changing how we work with youth

Our team has seen firsthand the generativity of youth at the Students Commission of Canada, a not-for-profit organization that is working toward a world “where all young people transition successfully into adulthood.”

At their “Canada We Want” conferences, we have witnessed early generativity in action. Young people from across Canada with a diversity of experience, expertise, and identities work together to develop a plan to create the change that they want to see in their community, tackling issues such as poverty, employment, prejudice, and substance abuse. This work is then presented to politicians, policymakers, and other leaders and has helped inform Canada’s first national youth policy.

Taking IT Global is another organization that capitalizes on young people’s generativity. It works to “empower young people to become agents of positive change in their local and global communities.” It has given out more than 2,500 grants to youth, and also provides education and online resources for adults. The grants have helped youth educate boys about mental health, and prompted a $15 million cleanup of a river in Nova Scotia.

So how can we incorporate these ideas in our everyday interactions with young people? Whether we are parents, teachers, coaches, or community leaders, it is worth reflecting on whether our assumptions of youth stem solely from a deficit model, or whether we account for the capacities and motivations of young people. Rather than focusing on what they lack, much more focus can be placed on their capacity and desire to have a positive and lasting impact. At the same time that we are asking young people who they want to be, we should be asking young people what kind of world they want to leave behind.

Greater awareness of the importance of generativity in youth will contribute to a more pervasive narrative of young people as capable, and motivated to contribute, thus combating some useless and inaccurate stereotypes about youth.

So the next time you see a young person in the news, or in your community, making the world a bit better for the next generation, you might smile to yourself and think, “Typical.”