Americans’ trust in the media, their government, and each other has declined over the past four decades. And yet, according to many national surveys, trust in science and scientists remains high. In a 2006 Harris poll, for example, 77 percent of respondents said they trust scientists to tell the truth—roughly 60 percent more than the number who trusted the president.

In recent years, however, several areas of scientific research—from global warming to stem cell research to evolution—have become highly politicized, in ways that threaten the credibility of prominent scientists and their findings. 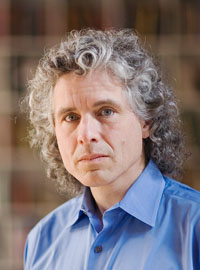 In one notorious instance, the Bush administration fired cell biologist Elizabeth Blackburn and medical ethicist William May from the President’s Council on Bioethics, a decision that many critics alleged was part of an effort to purge the Council of dissenting scientific voices. Janet Rowley, professor of molecular genetics at the University of Chicago and a member of the Bioethics Council, later described the dismissals as “an important example of the absolutely destructive practices of the Bush administration” when it comes to science and scientific issues.

Cognitive psychologist Steven Pinker is no stranger to these debates. In a recent essay for The New Republic, for example, Pinker argues that the work of the President’s Council on Bioethics “springs from a movement to impose a radical political agenda, fed by fervent religious impulses, onto American biomedicine.”

Pinker is Harvard College Professor and Johnstone Family Professor in Harvard University’s psychology department. He is famed for his research on language acquisition, and has published extensively on the idea that both language and moral intuitions are biological adaptations that arose from a process of natural selection.

In addition to being a working scientist, Pinker is a leading public intellectual, consistently offering an informed perspective on scientific debates. As one of America’s most popular science writers, his articles have appeared in The New York Times, Time, and The Atlantic Monthly, and he is the author of seven books, two of which were finalists for the Pulitzer Prize. Pinker was named one of Time magazine’s 100 most influential people in the world in 2004 and one of Foreign Policy’s 100 top public intellectuals in 2005. His most recent book is The Stuff of Thought: Language as a Window into Human Nature, a New York Times bestseller.

While on a 10-city tour to support the paperback release of The Stuff of Thought, Pinker talked with Greater Good about science, politics, and trust.

Greater Good: Americans seem to hold science and scientists in high esteem. Do you think this trust is justified?

Steven Pinker: I think it is. Not because scientists are necessarily trustworthy people, any more so than anyone else, but because the institutions of science are set up to reward finding the truth and to punish hiding it. So, as a matter of self-interest, scientists are nudged toward the truth. They suffer a loss of prestige and esteem if someone else fails to replicate an experiment they have used to back up a claim.

Likewise, if there is some obvious flaw in an experiment or in an argument, the mechanisms of peer review will ensure that they don’t get their next grant or don’t get their next paper published. And they will be humiliated if the paper does come out and the flaw is exposed afterwards. If they say something patently false during a public meeting, there will be consequences.

In contrast, I think politicians have low credibility because our institutions at present don’t reward truth-telling among them. Quite the contrary. It’s easy to get away with blatant lies and misleading euphemism and doublespeak. So the incentive structure favors bending the truth among politicians, more so than one finds in the institutions of science.

SP: To some extent they go back further. To be honest, I was skeptical of claims that the Bush administration is worse than previous ones. But I have now been turned around, and I see that the accusations are correct, that there is a Republican war on science, and that it does seem unprecedented. I see that in the areas with which I have first-hand familiarity. For issues like sex education and climate, I have had to take the word of the scientists who have been directly involved.

GG: What changed your mind?

SP: I’ve been personally involved in three issues, and in each case, intervention from the Bush administration has gone against scientific consensus.
The first involved bioethics, where the President’s Council on Bioethics has been packed with cultural conservatives and opponents of biomedical research, with a concerted effort to exaggerate the downside of biomedical research and to play up the fears.

The second is evolution, where Bush himself called for the so-called “controversy” between intelligent design and evolution to be taught in schools, whereas virtually every intelligent scientist believes that there is no such controversy.

The third involves regulation of language on the airwaves, where my book The Stuff of Thought was cited by the Solicitor General in a brief to a U.S. Appeals Court on whether the Federal Communications Commission has the authority to sanction the networks for failing to bleep out fleeting expletives—that is, celebrities such as Cher or Bono or Nicole Richie saying “fucking brilliant” or “they can fuck themselves” during live television broadcasts. And the government cited what I think are bogus considerations about protecting the mental health of children as a rationale for restricting speech on the airwaves. They used my writing to support their case in a way that I felt was deceptive.

GG: Do you believe that the Bush administration’s actions will have any lasting impact on Americans’ levels of trust in science and scientific institutions?

SP: Yes. For example, the Religious Right and their supporters in the Bush administration argue that scientists are suppressing debate about evolution. Having long ago lost the legal battle to have intelligent design taught in the classrooms, they are now framing the issue as an attempt to “teach the controversy,” therefore putting scientists on the side of appearing to want to suppress controversy.

To the extent that they succeed in framing the debate that way, it would look as if scientists are pushing their own dogma. And that is simply dishonest. Scientists would have no interest in a debate between astronomy and astrology or chemistry and alchemy, simply because you have to draw the line somewhere and impose some barrier to entry of basic scientific credibility before you engage in a debate. But that can be distorted into making it seem as if scientists are as dogmatic as the defenders of religious fundamentalism.

GG: You mentioned taking the word of climate scientists about debates in global warming because you have no expertise in that area—something you have in common with me and a majority of Americans. What red flags should ordinary citizens watch out for when it comes to political debates about science and scientific issues?

SP: Certainly they should be curious about the degree of scientific consensus, which is what I sought to understand in forming an opinion about climate change. And science journalism has a responsibility to report the current degree of consensus, rather than taking a “he said-she said” approach.

Secondly, people should be curious about the state of the evidence, which means that there is a parallel obligation on the part of scientists to lay out the evidence. Scientists should resist any temptation to pronounce what might look like dogma. They should be prepared to explain, in intelligent layperson’s language, what compelled them to a particular position, in terms of the available evidence, and be prepared to articulate that background in publicly accessible articles. Conversely, the public should insist on being persuaded by seeing the evidence stated as clearly as possible.

GG: What, in your opinion, does the next presidential administration need to do in order to repair the damage done by the Bush administration?

But then McCain selected Sarah Palin as his running mate. That is a disturbing turn. He has committed himself to a running mate who has questioned evolution, who has appealed to God rather than a cost-benefit analysis in justifying a gas pipeline, who may have meddled with reports on the endangered status of species affected by global warming. So now I am worried.

In the long term, this underscores the need not just for better science education, but for the attitudes of science at its best to be applied throughout the public sphere—a demand for evidence and logical consistency rather than dogma, and an emphasis on understanding rather than sloganeering.