Questions about the role—and the limits—of gratitude have hovered around the United States-Iraq relationship since the fall of Saddam Hussein. With Iraq now free from dictatorship but enveloped in chaos, do the Iraqi people feel more gratitude or resentment toward the United States? Can they juggle both feelings simultaneously?

These are questions Rend al-Rahim Francke has confronted for years. As Iraq’s first post-Hussein ambassador to the U.S., al-Rahim had to nurture the complicated and delicate ties between the two nations. 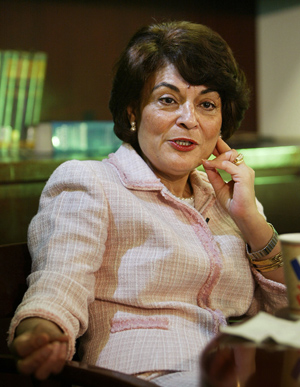 For more than a decade before assuming that post, she had been a strong and influential advocate of regime change—most notably as a founder and executive director of the nonprofit Iraq Foundation, based in Washington, D.C.

But despite her longstanding support for the invasion of Iraq, al-Rahim has openly criticized the Bush administration’s post-invasion plans. One of her most prominent displays of criticism came three years ago, in her first Congressional testimony as Iraq’s representative to the U.S.

She began by expressing “gratitude for the leadership of the United States in liberating Iraqis from the murderous dictatorship of Saddam Hussein.” Yet she soon balanced this gratitude with objections to the way the war had been waged.

“Iraqis wanted and welcomed the U.S. and the Coalition as liberators and partners, not as occupiers,” she said. “We wanted liberation to have an Iraqi face and to take ownership of it. … Declaring an occupation dealt a blow to Iraqi dignity and national pride.”

As these comments illustrate, al-Rahim has claimed sparsely populated middle ground between the Iraq war’s defenders and critics. The nuances to her position seem consistent with her own personal background as a native of Iraq who has been an American citizen for 20 years, unusual for a foreign ambassador.

Her willingness to both praise and criticize the U.S. may have gotten her into trouble. When al-Rahim resigned from her post a few months after her testimony, it was amid speculation that her criticism had brought her out of favor with the American and Iraqi governments. (She’s now a senior fellow at the United States Institute of Peace, a federally funded organization that promotes conflict prevention and resolution, and she has also resumed her role as executive director of the Iraq Foundation.)

But her perspective also makes al-Rahim especially qualified to discuss the tension—psychological as well as political—that exists in the U.S.-Iraq relationship. She recently spoke with Greater Good about the pivotal role of gratitude in this relationship over the past four years, and in the years to come.

Greater Good: In your 2004 testimony before Congress, why did you feel it was necessary to begin by expressing gratitude toward the United States?

Rend al-Rahim: I absolutely wanted to make clear, right at the beginning, that the Iraqi people are thankful that the United States helped them by getting rid of Saddam Hussein and his regime. I did not want that point to remain ambiguous or in doubt. The Iraqi people—we’re talking here about 90 percent of the Iraqi people, a very, very high percentage—were absolutely grateful.

GG: So fast forward three years, when the situation in Iraq has deteriorated and criticism of the United States within Iraq and around the world has really intensified. How do we reconcile current events with the feelings of gratitude that you expressed and represented three years ago? Given the current situation, how strong or influential is the feeling of gratitude within the mix of all the emotions that Iraqis now hold toward the United States and its government?

RR: The fact is that nobody in the universe likes occupation, and in the Middle East, it is a particularly sensitive topic because the Middle East has suffered from occupation and mandates for so long. It’s a very traumatic issue. And it gets to the complexity of feelings toward the U.S.

So there are grievances. But looking back, I think people say there was an absolute good that the U.S. did for us.

GG: How do you balance some of these conflicting feelings—the gratitude and the grievances?

RR: It certainly is conflicted emotionally. I think in general, any relationship has to be worked on. And the parties to a relationship have to understand what the needs and the fears and the sensitivities of the other are—whether this is a parent-offspring relationship, or any relationship where emotions of gratitude come in. You cannot simply say, “Well, they have to be grateful, and I don’t have to do anything more.” Any emotions of gratitude have to continue to be nurtured. And I think that, certainly, the U.S. has not been very sensitive to the need to continue to nurture that relationship in a healthy and positive way.
I will give you a personal example of this on a micro scale, and a larger example on a macro scale. On a micro scale, when the U.S. shot my bodyguard, nobody from the U.S. military made any effort to find out who this person was. When we told them who he was, they didn’t go and apologize to the family. They didn’t send a letter, they didn’t send money, they didn’t in any way, shape, or form express contrition publicly to the family or give them any kind of compensation. I think that is grossly insensitive.

On a more public scale, take the Abu Ghraib incident. That was horrific. Now, do these things happen all the time? Yes. Do the Iraqi police do things like that and worse? Yes. But that doesn’t absolve the U.S. military from grave wrongdoing, and the kind of wrongdoing that goes to the heart of Iraqi dignity and self-respect.

It seems to me that at the time, the U.S. government—at the level of the Pentagon, State Department, and the White House—should have meted out much sterner justice, much quicker justice, and much more public justice in a way for the Iraqis to see justice being done. So I think there’s a great deal of negligence. It’s not evil; it’s negligence and insensitivity.

On the other hand, I think Iraqis are also deficient in the awareness that they need to work on this relationship themselves. I hold a very peculiar position because I’m an Iraqi-American, and I hear a lot of Iraqis not caring enough about the deaths of the young American soldiers, not expressing enough sympathy. And I find this very puzzling and very unpleasant because, after all, these are sacrifices being made by Americans for Iraq. So I think on both sides there’s an element of negligence toward that relationship.

And I don’t think it’s possible to keep a healthy relationship unless you show that you care about a person, or a group of people, on a continuing basis. You cannot simply feed off a fund of gratitude. It has to be replenished. And similarly, as I say, in the case of the Iraqis, they must have much more sympathy and empathy for the fact that young Americans are coming to this country, suffering heat and deprivation, and dying and being maimed.

GG: So in order to replenish feelings of gratitude and goodwill, where can the United States and Iraq go from here?

RR: I think the best way to go forward is to find out what the U.S. has done right. There are so many books about what went wrong—and I’ve testified and written about that. But I think there needs to be much more attention to what is going right in that relationship.

Let me give you an example. There are literally thousands of NGOs working in Iraq—I think there are over 4,000. Many of them have been trained and are being helped by larger American NGOs. These range from women’s groups to human rights groups to advocacy groups of all kinds. On the humanitarian level, a lot of American-based organizations have also gone out there and delivered aid and assistance. I think that’s important to highlight.

I think that’s one area we should look at. Another area is more military. There was a lot of comment that, in the first two or three years after the fall of the regime, the American military concentrated on force protection, not citizen protection. The perception of the Iraqis is that the U.S. military focused on its own protection. And I would agree with that from my own personal experience.

Just recently, we’ve seen that shift: From force protection, it appears the U.S. military is now looking at citizen protection. And in the process, by the way, U.S. troops are putting themselves in far greater danger than they have over the past four years. I think if there is a perception by Iraqis that the focus has shifted, that the American forces are now going to concentrate on protecting and helping Iraqis, then I think that will make an impact.

It is all a question of showing that you care about the other, that you’re in a partnership—not a relationship of the occupier and occupied. You’re not in a relationship where it’s the all-powerful and the powerless.

GG: Looking back over the past four years, how would you describe your own personal mix of emotions toward the U.S. and its relationship with Iraq?

RR: Well, as I say, I’m in a very peculiar position because I’m both an American and an Iraqi. And in a sense, I feel privileged to be in that position because I
think it is a very important relationship. I have always thought that, even before 2003. But it’s distressing that it should be a schizophrenic relationship, or at best a frustrating one. I do think both sides need to work on it. And I certainly feel, on a very personal level, that I need to resolve this within myself. I must not get carried away either by anger or by overwhelming gratitude that blinds me to mistakes on either side.