Today, bookstores are full of books on happiness, most of them published in the last few years. There’s Daniel Gilbert’s Stumbling on Happiness, Matthew Ricard’s Happiness, and, more recently, Sonja Lyubomirsky’s The How of Happiness, to name a few. All these books claim to offer everything we need to know about happiness—what it is and isn’t, how to attain it, how difficult it is to attain. And they all seem to presume that the search for happiness drives much of human behavior.

“Whether our dreams are about professional success, spiritual fulfillment, a sense of connection, a purpose in life, or love and sex, we covet those things because ultimately we believe they will make us happier,” Lyubomirsky writes in The How of Happiness. If she’s correct, her book—300-plus pages of advice on how to become happier—should be a welcome, if hefty, addition to anyone’s home library. 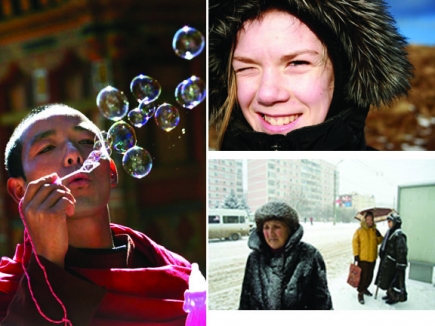 Author Eric Weiner found that the relatively happy people of Bhutan (left) and Iceland (upper right) have governments that are responsive to their needs, but that the unhappy Moldovans (lower right) are distrusting and uncooperative. © Steve Evans/Julia Runoffsdottir/Dorin Nicolaescu-Mustea

But is all this focus on happiness a good thing? Three new books ponder this question from different perspectives, with varying degrees of success. Taken together, the books offer a critique of the narrow (quintessentially American) viewpoint that equates happiness in life with the absence of “negative” emotions, like sadness and grief.

In Against Happiness, literary critic Eric G. Wilson proposes that our culture’s preoccupation with happiness has overshadowed the importance of melancholy, an emotion he believes worth preserving. Many Americans, he argues, eschew suffering at the peril of both losing touch with reality and learning from pain and sadness. “To desire happiness only in a world undoubtedly tragic is to become inauthentic, to settle for unrealistic abstractions that ignore concrete situations,” he writes. As Wilson sees it, our tendency to keep smiling in the face of world disasters—war, famine, global warming—courts apathy toward solving them. How else, he writes, can one explain a culture that has “translated war into blips on our television screens”?

Wilson believes our dogged pursuit of happiness without pain prevents us from embracing life fully. “The richest moments in life are [those] junctures where we realize, in our sinew, what is true all the time: the cosmos is a dance of joggled opposites, a jolted waltz.” His point, often made in poetic fashion, is that life cannot be reduced to one side of the emotional equation without losing something valuable. It’s hard to argue with him on that point.

But Wilson’s book falters when it ventures from rhetoric to science and attempts to equate melancholy with artistic greatness. The world might be a poorer place without the sad poetry of Sylvia Plath or Beethoven’s most melancholy music. But when Wilson states there is a “scientifically proved relationship between genius and depression, between gloom and greatness,” without offering studies on the subject, he loses credibility. Nor does it seem fair to write, as Wilson does, that “happy people reduce the earth to a series of glittering boxes.” Statements like that one are pedantic at best, and insulting at worst.

Still, he raises interesting questions, some of which are tackled with greater regard for evidence and logic in The Loss of Sadness: How Psychiatry Transformed Normal Sorrow into Depressive Disorder. In this technical but important book, social scientists Allan V. Horwitz and Jerome C. Wakefield take exception to the way depression is over-diagnosed in our culture, too often in patients who are simply experiencing intense sadness as the result of life events. Conflating normal sadness with clinical depression, they argue, can lead to unnecessary treatment interventions, such as medication or long-term therapy, and can prevent people from seeking more appropriate social support. On a larger scale, the misdiagnosis of depression creates the impression that Americans are becoming more depressed (an internal condition) rather than suffering greater social problems (an external condition), two problems that call for completely different solutions (medication versus changing social policy).

Not distinguishing between normal sadness and clinical depression weakens our ability to respond appropriately to both. According to Horwitz and Wakefield, emotions like sadness and depression have a long evolutionary history in humans, suggesting that these emotions must be useful to our species. The benefits may not be completely clear, but if we pull out the Prozac every time someone feels despondent we risk losing important, if not well-understood, emotional and social benefits.

Though neither Wakefield and Horwitz nor Wilson advocates withholding treatment from someone in a constant state of despair, they all agree that, in the face of world disasters or personal losses, these emotion may not only be normal, but helpful.

This view is also embraced by journalist and self-proclaimed grump Eric Weiner. In The Geography of Bliss: One Grump’s Search for the Happiest Places in the World, Weiner takes us on a journey around the world to discover what makes some cultural groups happier than others. Weiner’s search mixes sincere exploration with tongue-in-cheek cynicism, but he gives a more balanced and international view than many other books on happiness. It is precisely Weiner’s cantankerous and melancholy mindset that lends an edge to his search for happiness, and helps us appreciate how precious happiness really is.

The book opens with his journey to the Netherlands, home of the World Database of Happiness—a wealth of data on levels of happiness in almost every country on Earth. Surprisingly, many of the happiest nations are not the obvious ones—those with warm, tropical climates and great food and wine—but cold, dark places where people must huddle together to survive. In these cold environs, Weiner finds that “everyone must work together to ensure a good harvest … or everyone dies. Together.” In other words, external conditions don’t make people happy, but our relationships with others, often bred by the necessity of cooperation, do. “Necessity may be the mother of invention,” he writes, “but interdependence is the mother of affection.” Weiner’s observations on government are also enlightening. In Switzerland he finds that efficient public services translate into easier living, and that people exercise their democratic rights by voting on average six times a year. One might assume that democracy or socialism play important roles in happiness levels. But when Weiner travels to Bhutan, another “happy country,” he finds a monarchy, albeit one whose self-proclaimed goal is to increase “gross national happiness.” The relationship between happiness and democracy is elusive—it is more likely for happy people to choose democracy than for a democracy to result in happy people.

But having a government that is responsive to people’s needs appears to be one key to creating more happiness, a lesson we Americans might do well to study these days. Throughout his book Weiner weaves science in with his personal observations. When he visits Moldova, one of the unhappiest places in the world, he learns Moldovans don’t trust each other and are generally uncooperative when working together. To understand the connection, he draws on research that has shown how helping others can promote happiness, and he summarizes neuroscience findings that suggest “we are hardwired for altruism and not just faking it.”

Weiner shows how happiness can be reached by many roads, each paved by a different culture. For example, in Iceland, one of the happiest places in the world, people embrace failure and melancholy, two experiences we don’t normally associate with happiness. The Icelanders’ positive relationship to failure translates into a willingness to try things, allowing them freedom to create. But how do they reconcile a propensity for melancholy with happiness? An Icelander explains: “You nurture your little melancholia, and it’s like a buzz that makes you feel alive.” In other words, happiness is not inconsistent with experiencing occasional melancholy, and might even be enhanced by it—a finding I’m sure Wilson, Horwitz, and Wakefield would all embrace.

Though Weiner’s prescription for happiness is not as complete or detailed as that found in The How of Happiness, it is certainly more concise and contains some much-needed humor. In his epilogue he sums up some of what he’s learned: “Money matters, but less than we think and not in the way that we think. Family is important. So are friends. Envy is toxic. So is excessive thinking. Beaches are optional. Trust is not. Neither is gratitude.” His conclusions don’t have the scientific authority that Lyubomirsky’s do. But they certainly provide delicious food for thought.

The Geography of Bliss: One grump’s search for the happiest places in the world
By Eric Weiner, Twelve Books, 2008, 352 pages

The How of Happiness:  A scientific approach to getting the life you want
By Sonja Lyubomirsky, The Penguin Press, 2007, 366 pages