There has been no shortage of books recently about the benefits of positive emotions like happiness and optimism. But Barbara L. Fredrickson, author of Positivity (Crown Publishers, 2009), may be the first to suggest that a mathematical ratio of positive to negative emotions (3:1) represents a tipping point, beyond which one will lead a happier, more fulfilling life.

In another author's hands, this claim might seem hokey or even preposterous. But Fredrickson, a pioneer in the field of studying positive emotions, has over 20 years of research to back her up. 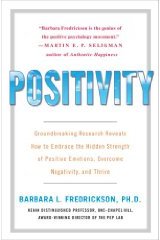 Fredrickson is best known for her "broaden and build" theory, which explains how positive emotions broaden our outlook and make us better equipped to adapt to life's ups and downs. This kind of flexibility, over time, strengthens social bonds and builds our resources, allowing us to thrive.

For example, as she explains in her book, we humans are notoriously bad at remembering faces of people from racial groups different than ours. In one experiment, subjects were exposed to pictures of people's faces from different racial groups and then, later, asked to see if they recognized those faces or not. At first, most subjects could only recognize faces from their own racial group. But, if subjects first were made to feel a positive emotion, their recall of other-race faces was much more accurate. As Fredrickson argues, their cognitive repertoire—in this case, the power of recognition—was broadened because of experiencing positive emotion, which led to building better interracial relations.

How can these kinds of insights serve the average reader? In Part II of her book, Fredrickson provides specific steps readers can take to improve their positivity ratio, such as cultivating kindness (which increases happiness) while controlling negative thinking. This is familiar ground, but it's clear that Fredrickson is inspired by her findings and genuinely believes they can help others. When combined with the scientific evidence presented in Positivity, Fredrickson's enthusiasm may motivate even some skeptics to take heed.