Happiness may be infectious, a new study suggests, spreading like a cold in winter.

The study, published in December in the medical journal BMJ, examined more than 4,700 people who had been tracked from 1983 to 2003. Over those 20 years, researchers periodically gave participants questionnaires that assessed their emotional well-being. They also gave these questionnaires to the participants’ close contacts—spouses, friends, relatives, neighbors, and co-workers—creating a network of more than 50,000 people.

When someone in the network became happy, he raised his spouse’s odds of becoming happy by eight percent, a sibling’s odds by 14 percent, and a next door neighbor’s odds by 34 percent. Happiness did not appear to spread among co-workers, a finding the researchers attribute to the sometimes competitive nature of work relationships. 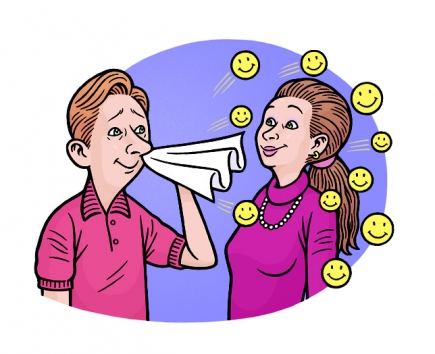 However, the study’s authors found no happiness effect for people who lived more than a mile apart; sometimes, it didn’t even spread to a neighbor on the same block, suggesting the waves of happiness weren’t caused by socioeconomic factors, such as living in a good neighborhood or making a similar income. These findings suggested to the authors that “the spread of happiness may depend more on frequent social contact than deep social connections.”