In The Mist, a recent Hollywood adaptation of a Stephen King story, the Army opens a wormhole between universes. Strange and deadly insects, some eight stories tall, traverse the wormhole and—naturally?—eat people.

Panic ensues. A group of townspeople are trapped in a grocery store and a divide opens among them. One faction, the religious fundamentalists, sees the insect invasion as the apocalypse and tags some people as sinners. The members of the other faction, whom I’ll call the modernists, hope that technology and superior strategy might save the day. 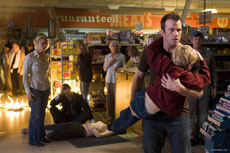 The Mist continued the Hollywood tradition of depicting humans as prone to panic. © Dimension Films

In one pivotal scene, the modernists, led by a commercial artist named David Drayton, gather in the back of the store. Because some of them fear the evangelicals in their midst more than the people-eating insects, they consider taking their chances outside.

“You don’t have much faith in humanity, do you?” says Amanda, a teacher, to another character.

“None whatsoever,” he replies.

“I can’t accept that,” says Amanda.

But David, the leader, snarls back, “Sure, as long as the machines are workin’ and you can dial 911. But you take those things away. You throw people in the dark. You scare the shit out of them. No more rules…”

In other words, David thinks disaster unleashes our true nature, and that nature is savage, murderous, and hateful. David’s dark view of human nature has largely prevailed in recent movie history, from The Day After Tomorrow to 28 Weeks Later to Cloverfield—or any movie in which the social order is turned inside out. In all of them, people panic when confronted with disaster. They run through the streets and push aside old men in wheelchairs. They abandon their wives to flesh-eating zombies.

As much as I love disaster movies, as much fun as they are, the social scientist in me knows that they’ve got us humans pegged all wrong. The results of nearly 60 years of research fly in the face of these Hollywood films.

It turns out that people rarely respond to disaster with extreme panic, recklessness, and selfishness. “September 11, 2001 showed that people are willing to help out others during an emergency,” says a report from the National Institute of Standards and Technology, one of the most thorough studies of a disaster I’ve ever seen. “These helpers often remained with the occupant in need throughout their entire evacuation, even though they were putting themselves at risk.” If most people had panicked on September 11, the death toll would have been much, much higher.

Or consider the case of Air France Flight 358. In August of 2005, it tried to land at Toronto’s Pearson International Airport in the face of rain, lightning, and strong winds.

Soon after touching down, Flight 358 slid down the wet runway and overshot the end of it by 600 feet. When it finally came to a stop, the plane burst into flames.

Remarkably, however, everyone on the plane, 309 people, made it out alive. Canada’s Transportation Safety Board, which investigated the accident, says, “The complete evacuation was effected in less than two minutes.” In my own research, I’ve come across countless stories like these, where large groups of people keep their cool and cooperate in the midst of a collective crisis.

No one seriously doubts that human nature has a dark side. People do panic. Nobody says they don’t. But it doesn’t happen often, and when it does, it is usually because those people are under very grave threat and see no way to escape. Nightclub fires, such as Chicago’s E2 fire in February of 2003 and Boston’s Coconut Grove fire of November of 1942, show that panic can happen when exits are blocked and people perceive that alternatives are rapidly disappearing.

We go astray when we assume that our dark side is our true, real, essential, natural side. According to this view, the rules that govern social relations are luxury items, discarded in disaster as one might shed a gold bar while trying to escape a sinking ship. But the truth is that our daily lives are built on a multitude of civilities and cooperative exchanges between people, from opening a door for someone to maintaining city fire departments. And sure enough, when disaster strikes, people still routinely help perfect strangers.

Perhaps the more expansive way to talk about humanity is that we are naturally social creatures. The results of our sociality can be dark, light, or somewhere in between. Social science has shown us that exactly at the moment when we might expect people to act selfishly—when the building is crumbling or the airplane is on fire—they can usually be counted on to help others. It is heroism, not panic, that should be considered normal.