Kids go to school to learn how to read, write, think, and reason. But that’s not enough in school and in life, according to many education experts. Students must also know how to understand and manage their emotions and to get along well with others, if they hope to thrive in the rapidly changing world of the 21st century.

Or, at least, that’s what Congressman Tim Ryan (D-Ohio) believes. 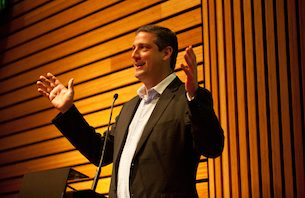 On May 8, Ryan re-introduced legislation to encourage social-emotional learning (SEL) in classrooms all over the country. The legislation is called the Academic, Social, and Emotional Learning Act, and it amends the Elementary and Secondary Education Act (ESEA). If passed, this legislation would allow funding for teacher and principal training to go toward social-emotional development, and encourage more classroom and school-wide programs in SEL.

The bill was first introduced by Ryan and others in 2011 as HR 2437. Now Congressman Ryan, along with Congressional co-sponsors Dave Loebsack, Tom Petri and Matt Cartwright, hopes that there is more support for it.

Congressman Ryan, who sits on the House Appropriations Committee, has become a champion of social-emotional learning and, in particular, the practice of mindfulness—one of several techniques used in schools to help kids gain social and emotional literacy. Training in mindfulness—or the ability to pay attention to present thoughts, emotions, and experience without judgment—has been shown to help kids feel less stressed, get along better with teachers and peers, and pay more attention in class. After meeting with researchers around the country who study mindfulness, Ryan published a book in 2012 called A Mindful Nation to help promote wider acceptance of the practice.

Research on the benefits of SEL is hard to ignore. In a 2011 meta-analysis of over 200 studies, scientists found that children who went through SEL programs in their schools had higher levels of social and emotional competency, expressed more positive attitudes toward themselves and others, and engaged in more pro-social—helpful and kind—behaviors than children who didn’t have SEL programs. In addition, problem behaviors, like aggression and truancy, went down in the kids receiving SEL, while academic performance went up significantly—by 11 percentage points—a finding that surprised even the researchers.

Some may feel that SEL is a luxury, only to be taught if the “basics” are covered. But research has shown that kids who suffer from high stress—whether rich or poor—can have trouble concentrating at school or may act out in aggressive or self-harmful ways. SEL programs help kids regulate their emotions, reduce stress, and negotiate interpersonal conflicts, all of which create safer, more harmonious learning environments for everyone.

Not all SEL programs are created equally—some have been rigorously evaluated and have been shown to produce better results than others. Many of these evidence-based programs are listed on the website of the Collaborative for Academic, Social, and Emotional Learning—or CASEL, an organization devoted to developing, researching, and promoting evidence-based practices in education.

School districts around the country are beginning to implement SEL programs and many state education boards have incorporated SEL requirements into their standard education requirements. But many school districts either can’t afford the training or have yet to understand the implications of the research. If Ryan’s bill passes, it would help ensure that more schools have access to these kinds of programs, benefitting students who might not otherwise receive SEL training.

Last year, the Greater Good Science Center hosted a talk by Tim Ryan at the University of California, Berkeley. Here is the video of that talk.