Schools try many approaches to encourage students to be kind and helpful, from rewarding them for good behavior, to implementing service-learning programs, to directly teaching them social and emotional skills.

But sometimes the most powerful learning happens when students are encouraged to discover something for themselves—especially when what they’re “learning” is already a natural part of who they are as human beings. And according to science, altruism is a natural part of us all.

Many studies have demonstrated that children as young as 14 months have innate altruistic tendencies, well before socialization can have a major influence on their development.

For example, researchers Felix Warneken and Michael Tomasello found that in a variety of situations in which an adult experimenter was ostensibly having trouble performing a task, 18-month-old infants readily helped. In one scenario, an experimenter who was hanging towels on a clothesline dropped a clothespin and appeared to have trouble reaching for it. In an even more challenging scenario, the experimenter was unsuccessfully trying to get a spoon by squeezing his hand through a tiny hole in a box; unprompted, the children not only helped, but also showed the adult a more effective approach of lifting a flap on the side of the box.

In speculating why such young children had the impulse to help, Warneken noted that they did so even if no parent was present, and, thus, couldn’t have been responding to unconscious parental cues. For instance, children still helped when doing so required them to disengage from playing with a toy or to climb over obstacles. “Children are thus motivated to help another person,” writes Warneken, “even if it involves opportunity costs or effort to do so.”

Science has also shown that young children receive a boost in positive emotions when giving away something of their own to another. For example, in one study toddlers were introduced to a puppet that liked treats. Each child was given eight treats for him/herself and then watched the experimenter give a treat to the puppet. After being asked, children gave one of their own treats to the puppet. Next, the experimenter found a treat and asked the child to give it to the puppet. Researchers found that while the children’s happiness levels increased when they shared a “found” treat, happiness levels were even higher when the children sacrificed their own treat.

While these experiments show that kindness and its resultant joy are innate from a very young age, this quality/experience still needs to be cultivated as children enter environments where incentives that support these aspects aren’t always in place. Thus, it is incumbent upon schools to create environments in which these qualities can flourish.

A case study in giving

In 2006, a group of 8th graders at Pitt River Middle School in British Columbia got a first-hand lesson in the joy that kindness brings—a lesson that quickly spread throughout the rest of their school.

After attending a workshop led by social-emotional learning expert Kim Schonert-Reichl, teacher Kiren Chand excitedly shared with her students what she had learned: science has shown that being kind to others makes us happy. Struck by this simple key to happiness, the students were inspired to test the science for themselves.

They started by anonymously performing a single act of kindness for each class. But once the students saw how grateful and happy their kind acts made other people feel, they decided to keep going. Hence, the Breakfast Club was born.

Over the next few months, the Breakfast Club performed anonymous acts of kindness for staff and students throughout the school. For example, each teacher received a personalized thank you note in his or her mailbox, as well as giftcards that the students persuaded the local Starbucks to donate. Inspired by this initial success, the students solicited other local businesses and received such an overwhelming response that they were able to prepare a Christmas gift bag for every staff member and student in the school.

As a result, the climate of the school began to improve. Staff and students reported feeling happier, more included, and more appreciated. And the kindness became contagious; other classes paired up to leave anonymous surprises for each other. At the end of the school year, the Breakfast Club issued a challenge: If the student body collected 1,300 food items for the local food bank, the Club members would reveal their identities. The challenge was met.

The ultimate mission of the Breakfast Club was for everyone in the school to feel the way they did when being kind to others—exactly what science suggested they would—an inner joy. “As students started helping others out and giving gifts anonymously,” wrote one student who was not in the Club, “they found out that when you are kind to others, you feel warm and happy inside.”

What schools can do to cultivate kindness

Both research and experience offer some key insights for schools that would like to develop students’ innate kindness:

Schools don’t need to reward kind behavior; the reward occurs naturally through the warm feeling that comes from helping another person. People who witness others doing unexpected kind acts often get a similar warm and uplifting feeling—what psychologist and researcher Jonathan Haidt calls elevation. Haidt’s research shows that across cultures, human beings are moved and inspired when they see others acting with courage or compassion, and this elevation makes them more likely to want to help others and become better people. As one student wrote to the Breakfast Club, “You are starting to rub off on people so they can make other people happy.”

Yet rewarding children for kind actions has become commonplace in our schools—for example, in programs such as Positive Behavioral Interventions and Supports. These kinds of rewards go against everything researchers know about developing altruistic tendencies in children. Perhaps the most convincing argument comes from a study in which scientists found that 20-month-old children who were offered a reward for helping behavior were less likely to help again than those who hadn’t received a reward.

Instead of offering rewards for good behavior, teachers and school administrators should model kindness toward students and one another. If students see the adults behaving compassionately and if they understand that they are responsible for doing their part to create a kind and helpful school community, they will be intrinsically motivated to act on their natural proclivity for altruism.

It doesn’t take much to bring out students’ inherent kindness. Simply hearing about the science of kindness motivated the Breakfast Club students to try it for themselves. But research suggests that it can be even easier than that.

In a study published in the journal Psychological Science, 18-month-old infants were shown photos, each featuring one of four backgrounds: blocks, two dolls facing each other, a single doll, or two dolls facing away from each other. The study revealed that the background of the photo decisively influenced behavior: The toddlers who saw the dolls facing each other were three times more likely to spontaneously help a person in need than were the toddlers who saw the other background images. All it took was a gentle reminder of our human connectedness to prompt these toddlers to reach out and help someone.

Such reminders are easy for schools to do: Hang posters that show kind, helpful behavior; greet students by name as they enter the classroom; use a warm tone of voice with students; write an encouraging word on an assignment; start the day with a positive quote; share stories of kindness. Teachers and school leaders could add to this list ad infinitum. 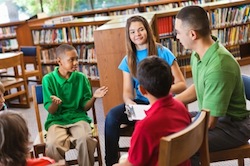 Saying “thank you” to someone who has done something kind for you is not the same as rewarding that person. Instead, it’s an affirmation that we have received a gift. According to gratitude expert Robert Emmons, gratitude is a relationship-strengthening emotion. “Mainly,” he writes, “because it requires us to see how we’ve been supported and affirmed by other people.”

The staff at Pitt River Middle School expressed their gratitude to the anonymous Breakfast Club through a letter to the editor in the local newspaper that read in part,

You are showing that the true reward is not in being identified as a gift giver, but in the action of giving. That is the greatest gift of all. What the Breakfast Club has given the Pitt River staff will not be lost or forgotten by us.

Fortunately, gratitude is one of the easiest things to encourage in schools. Here are a few ideas:

This oft-quoted saying from Albert Einstein beautifully expresses what the students of Pitt River Middle School experienced through the Breakfast Club. Rather than being coerced into kindness by the promise of rewards, they discovered of their own volition what was already inside them: the joy that arises from making the world a better place.

Scientific research has shown us that the spark of kindness resides in everyone, and that even small actions can fan that spark into a flame. I encourage you to put this idea to the test in your school.