What if there was a simple way for kindergarten teachers to predict which of their students, regardless of their backgrounds, were more likely to drop out of school, get arrested, use drugs, or have mental health issues?

According to a groundbreaking recent study, they don’t need a crystal ball. They just need to watch for kindness. 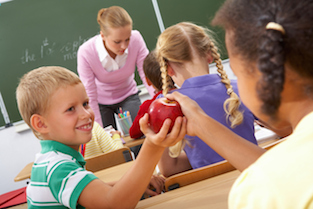 Skills like kindness, cooperation, and empathy are sometimes dismissed as “soft” skills in education—nice to have, but not essential to success in school or in life. Developing “hard” skills like math and reading can seem far more practical and important—hence our education system’s rigorous focus on teaching and testing them.

But the recent study, published last month in the American Journal of Public Health, turns that thinking on its head. After following hundreds of students from kindergarten through early adulthood, the study suggests that possessing those “soft” skills is key to doing well in school and avoiding some major problems afterwards. In fact, the study even suggests that neglecting these skills could pose a threat to public health and safety.

The study used data from a long-term project that tracked 753 low-income students from the time they were in kindergarten until they turned 25. When these students—who lived in Durham, North Carolina; Nashville, Tennessee; Seattle, Washington; or rural Pennsylvania—were in kindergarten, their teachers rated how well they demonstrated kind and helpful (or “pro-social”) behaviors, such as cooperating with peers, being helpful to others, understanding others’ feelings, and resolving problems on their own.

Importantly, these findings held true regardless of the student’s gender, race, or socioeconomic status, the quality of their neighborhood, their early academic skills, or several other factors. In other words, even with the children’s backgrounds taken into account, those who were rated as more pro-social in kindergarten were more likely to succeed—and avoid problems—in the future.

In some cases, kids’ kindness was more strongly related to certain outcomes later in life than were other factors that might seem more relevant. For example, surprisingly to the researchers, the level of aggression that a student showed in kindergarten couldn’t predict whether the student would have a run-in with the law later in life—but his level of pro-social behavior could.

The results echo findings from other research, such as that feeling socially connected as a kid is more strongly associated with happiness in adulthood than academic achievement is, and that children who participate in programs designed to strengthen their social and emotional skills do better academically.

In this recent study, the results don’t prove that strong pro-social skills actually cause all of the positive outcomes later in life, just that there is a strong relationship between the two; future research will have to explore that connection further.

But to the researchers, who are from Penn State and Duke University, the results make a convincing case for investing more in nurturing students’ social and emotional skills—which, according to prior research, are malleable and can be improved, with lasting and meaningful results.

“Enhancing these skills can have an impact in multiple areas,” they write, “and therefore has potential for positively affecting individuals as well as community public health substantially.”

Indeed, to take just one example: Given that the latest estimates put the annual cost of drug abuse in the United States at $193 billion, factoring in lost productivity and health care and criminal justice costs, it seems there are very hard benefits to “soft” pro-social skills.