Most of us dislike arguing with our friends and family about politics. Sometimes, even simple disagreement can make us feel uncomfortable. That might be why Americans are increasingly segregating into like-minded communities. We are now choosing neighbors, friends, and spouses according to their political beliefs. 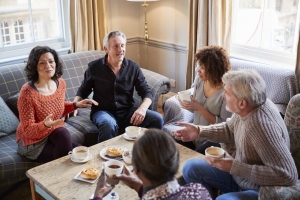 But what happens when we get out of the bubbles we have created for ourselves? A new study offers some insight.

To find out, a team of University of Minnesota researchers used surveys from the 2008 and 2012 elections to compare how people changed their minds about candidates in high-disagreement in-person social networks and in those with less political diversity.

Unsurprisingly, people in social networks with less disagreement about the elections tended to become increasingly rigid over time. They’d end up going with the group’s candidate even if they disagreed with the candidate about specific issues.

“As the election wore on, their attitudes towards the candidates got more and more partisan. And overwhelmingly, in the end, they chose their party’s candidate,” says Pierce Ekstrom, a postdoctoral research associate at Washington University in St. Louis, who led the study.

But something interesting happened with voters in high-disagreement networks.

“When people say that they disagreed about politics with other people they felt close to—so, family and close friends—they tended to shift their preferences based on their issue positions and not necessarily based on partisanship,” Ekstrom said.

That doesn’t mean they necessarily switched sides, in terms of who they voted for at the end, but their vote was more decided based on policies rather than party loyalty. In other words, exposure to different points of view in their immediate social networks seems to be associated with looking much more closely and critically at the candidate’s positions, as opposed to just reflexively rooting for their team.

This suggests that the impact of pure partisanship on voting patterns is weakened by the simple fact of having a more politically diverse social network.

Ekstrom emphasizes that the study has one important caveat. The social networks the study examined were individuals’ in-person networks of friends and family. “We don’t think that following a couple extra pundits from the other side on Twitter, for example, would have the same effect,” he said. “You don’t have to see them in person, you don’t have a relationship with them, so you might be perfectly fine dismissing what they have to say.”

Of course, building an in-person social network that is politically diverse can be difficult. Americans are increasingly segregated along political lines, everywhere from the neighborhoods we live in to the social media bubbles we live in online.

We might try to remember that talking to people we disagree with could very well help all of us to think more deeply about our political commitments and whether the politicians we’re voting for really represent us. If you’re up to the challenge of doing so, organizations like Better Angels, the One America Movement, and The People’s Supper can help. They all specialize in bringing together groups of politically diverse people in a variety of different formats in order to spur conversations across the aisle and build lasting relationships.